The 4 Keys to Happiness

Anando’s insights on ‘The neuroscience of happiness’

Understanding the nature of happiness is a hot new topic in science – it appears in all the scientific magazines, and some time ago the BBC devoted a whole series of programs to the subject (The science of happiness), interviewing scientists from all over the world. It even has a name, ‘The neuroscience of happiness’.

The scientists have been trying to understand how the different mechanisms of desire, want, happiness and pleasure work in the brain. And from their million dollar research on the subject, many of their conclusions confirm what Osho was saying way back in the 1960’s.

They have ‘discovered’ that most of the things we think will make us happy, don’t, at least not for long. For example to their surprise they found that money, beyond enough for basic needs, does not bring more happiness. Nor do the things money can buy. Research has shown that even people who win vast sums in a lottery, after just a few years are as miserable as they were before they won.

Why is this so? First, the things that give us pleasure are usually physical – sex gives us bodily gratification, money and objects give us mental gratification. But all these are transitory pleasures.

After a while, we take ‘things’, including people, for granted – even things that once made us ecstatic. For example, the new lover, or the new car or house, the new dress or the new technological whizzmo… the initial thrill soon wears off, and then we are looking for something better, aren’t we?

It is what the scientists call the ‘hedonic treadmill’. We adapt to things so fast, and the more possessions and accomplishments we have, the more we need to have, to keep boosting our level of happiness.

Osho explains that this is because the mind is always desiring – that is its nature. And once it gets what it had been desiring, it looks for the next object of desire. The mind can never be happy with what it has, it is always striving after that which it doesn’t have, or cannot have. He says the mind can exist only with a goal, because it needs a way to remain tense. If the mind has a goal, then it can remain unfulfilled, frustrated, and living in hope. And because we are so identified with our minds, we are therefore always in misery.

Pleasure is not happiness

Happiness, says Osho, is different from pleasure. Pleasure comes from things. Happiness is not dependant on things, it is not conditional. It is a state of being that comes from inside you. Happiness is when there is no desire for something, just a gratitude for what is. Then it is not a temporary state, because as long as you have gratitude, you have happiness.

According to scientists, happiness is a very desirable state: the evidence shows that happy people live longer than depressed people, are healthier, more resilient, and perform better than others. Professor Diener of the University of Illinois says, “In one study, the difference in life span was nine years between the happiest group and the unhappiest group, so that’s a huge effect. Cigarette smoking can knock a few years off your life, three years, or if you really smoke a lot, six years. So nine years for happiness is a huge effect.”

So what makes us happy?

Osho gives four keys to focus on developing in yourself. Of course, his goal is not happiness per se, his goal is to bring about a total transformation of ourselves. His goal is bliss, which is even higher than happiness. But he says that as we start becoming more real and authentic, more tuned into ourselves than focused on outside things, then happiness comes automatically, like a shadow.

Part of the transformation process, he explained back in the 60’s, is to transform our impure emotions to pure emotions, by developing four qualities. These are, in fact, exactly the same qualities that science is now proclaiming will improve your ‘happiness level’:

Scientists say that friendship has a much bigger effect on happiness than a typical person’s income. And not just on happiness, but also on health, because our brains control many of the mechanisms in our bodies which are responsible for disease. And just as stress can trigger ill health, it looks as if friendship and happiness can boost our immunity against disease.

Osho says we all have a source of friendliness inside, but life gives us very few opportunities for it to develop. In fact, most people die without this source being developed at all, because what we call friendship is usually hypocrisy and politeness.

He says we have to constantly create a milieu of friendliness around ourselves, sending waves of friendly energy all around. One method he suggested back in the 60’s is to do one or two things for others every day, for which you expect nothing in return. Forty years later, altruism, or performing acts of kindness to others, is one of the main suggestions being proposed by happiness scientists.

Let’s face it – usually when we look at people, our thoughts are critical rather than compassionate. But Osho says there is a heart inside the worst of people, and if you are able to see it, you will be filled with compassion. This is not the same as pity, which makes us feel superior to others, and want to help or change them in some way. Compassion involves love and acceptance of people as they are.

If you can understand compassion, he says, then you will know how to spread happiness to others, and that in turn will develop the happiness center inside you. If, on the contrary, you go on being cruel and critical and judgmental of others, it will feed your own unhappiness. Because we become what our thoughts focus on.

The concept of compassion has so far been missed by the scientists, but watch out for it in the future!

Sadness is just a habit. Cheerfulness can also be cultivated as a habit. We just have to start looking for the things in life which are full of light, not darkness, because the way we look at life directly affects what develops inside us. If we see radiance and light everywhere, Osho says, we will feel radiant and light – we will feel joy. Life has no meaning of its own – it all depends on how you look at it. ‘Drop your sadness and say yes to joy. Let your life become a song’.

Doctors have also discovered the benefits of laughter – in many hospitals laughter therapists now work with patients, since it has been shown that people who can laugh heal much faster. That shows laughter has a tremendously powerful energy…

In the meditation camp Osho was leading when he spoke about this, he was very clear with the participants that there was to be no grumbling or complaining, not about the food or the accommodation, or the mosquitoes! He said this would come in the way of their experiences of meditation, because a complaining mind is never at peace.

There are so many things in life to be grateful for, and if we can shift our focus to those things, if we can start to experience and express gratitude more, he says it will change our life tremendously. We will be filled with so much peace, and so much mystery and wonder.

The happiness scientists are also big on gratitude – they suggest keeping a gratitude diary in which every day you write down things for which you are thankful.

These are four keys Osho gives us, and he says that if we can develop these pure emotions in ourselves, it will create an inner expansion of our being. That is because pure emotions are not dependant on others, they well up from within us, from our being. And because they are not dependant on outside sources, they are not temporary, transitory feelings. They are lasting.

Text by Anando
Image: ourworldtravels.com
Read what Osho has to say on the subject. He answers the question: What is happiness?
BBC: The Happyness Formula
YouTube: BBC 2’s The Happiness Formula

Work in Europe, Returning to Rajneeshpuram and Life in Pune 2

Don’t Just Do Something …Sit there 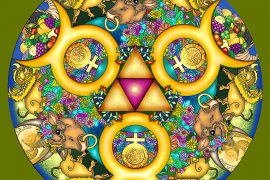 Horoscope for the Month of Taurus