When asked how he got the idea to write The Ashoka Chronicles, Premesh said he was motivated to write something new and ‘original’ that people don’t often find in the fantasy-fiction market. He calls it the ‘esoteric novel’. The Chronicles trilogy was inspired by the years with Osho, and his travels through India, Sri Lanka, and Southeast Asia.

“I wanted to introduce the general public to Masters, meditation, and the spiritual quest by wrapping it all in an entertaining, fast-paced mystery-adventure story set in some of the most exotic locations on the planet. A more subtle theme was to contrast the world of the mind with the dimension of the heart, so I created an allegory that is analogous to the contemporary world and the crisis we are facing concerning the evolution of human consciousness.

“Osho gave a discourse once about the writings of Carlos Castaneda, calling them the product of spiritual imagination. I think my novels fall into a similar category.”

Dear future reader – immerse yourself in the Ashoka Chronicles and you’ll find yourself on a most thrilling ride! The fascinating plot involves a secret society based on a 2,500-year-old design by Gautama Buddha and several highly intriguing characters who discover in various stages their familiarity and promises made in past lives. There’s also the Ashoka Circle of Nine dwelling somewhere in the Himalayas, an eminent powerful group of mystics with the means to stop the madness infesting our present societies and governments. All of them are committed to help avoid the looming total destruction of our planet and humankind and thus bring about higher consciousness, or the new man, so to speak.

After reading the first few pages of this metaphysical epic I was already hooked; reading on, an immensely deep story line revealed itself, with infinite and fascinating detail, introducing the most enigmatic personalities and covering their journeys throughout the globe. This is a momentous spiritual thriller, depicting a quest into the known and unknown that widely surpasses anything in this genre I have ever read and I find myself responding in superlatives!

Premesh is a masterly story teller, weaving his tale with aplomb, humour, brilliant quirks, and generous dollops of divine inspiration. He adroitly mixes fact and fiction and throughout, just at the edge of consciousness, I sense Osho smiling.

Do yourself a favour and start with volume 1, The Buddha Conspiracy. It is the jumping board for the mysterious unfolding that will come to certain culmination in volume 2, The Last Turn of the Wheel, and to a mind-blowing, utterly unpredictable crescendo in volume 3, The Great Debacle.

Find links to buy the books in English:
The Buddha Conspiracy
The Great Debacle
The Last Turn of the Wheel

Premesh (Alan Bassett) was a historian, therapist, novelist, and world wanderer. He took sannyas in Pune in 1981, and worked on the Meera Crew in Rajneeshpuram. In 1987 he returned to Pune and stayed for ten years mainly in the Osho Mystery School, then moved back to the USA and joined the Osho Academy in Sedona. For the past two decades, Premesh was leading transpersonal therapy and meditation groups in Europe, India, Brazil, and the United States. He later lived in the mountains of Spain with his beloved Meerananda and devoted most of his time to writing visionary fiction novels and short stories. He left his body in December 2012. www.esotericnovels.com 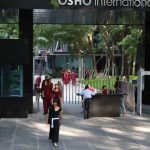 Selling my flat in Pune

Tears of the Silenced