My Life with Yoga

During a recent visit in San Francisco I did Yoga with 600 people at a Yoga gathering in Grace Cathedral. What an energetic experience! This was combined with ‘sound baths’, beautiful healing music played live. Then 600 voices filled the cathedral with OM, all together. I can’t explain the effects of the sound vibration surrounding all!

The experience of that moment brought this thought: “If religions stopped creating boundaries and just let people find a practical experience of connecting with themselves, wouldn’t it be awesome?” I was also reminded of the following words that I had read somewhere: “Similar to how Christians invented Physics, Yoga is the Science of the Inner invented by Hindus. This practice is unrelated to any religion.” 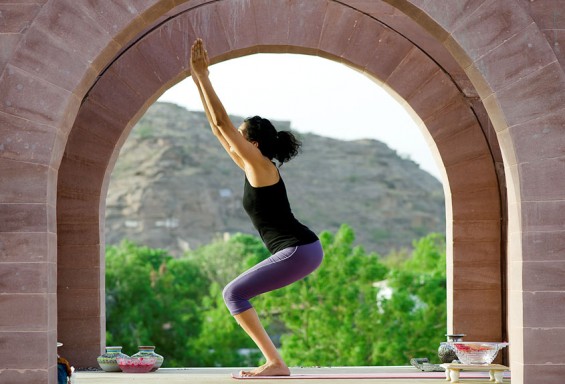 My origins are from India, while I carry an American passport since I was born here; I was however, brought up in India and my parents raised me as a meditator. So experiencing ‘myself’ was more important to me than following any belief system. Even though I was watching a lot of friends and family doing Yoga in India, I related it with Hinduism. As a teenager I had visited the ‘kumbh mela’ – one of the largest religious gathering of sadhus, gurus and yogis in India. The understanding that I had developed through meditation even at that age, showed me that a high percentage of them were only propagating a belief system. Instead of gaining self importance through money, these religious practitioners were gaining self importance by standing on one leg for decades.

My career as a software engineer brought me back to the States, and ironically I tried Yoga for the first time in Los Angeles. Since I didn’t like going to the gym I thought of joining Yoga and Pilates to stretch and exercise my body.

In 2011, changes in my life brought me back to India. When I met Yogacharya Sunil in my parents’ city in Rajasthan, I was still sceptical of the benefits of Yoga and did not think asanas were more than pure physical exercises. However, health issues and a heartbreak pushed me to dedicating myself again to self inquiry which had started at an early age. (See Chetna’s article: My Life in #Hash Notes)

Sunil, whom I asked for advice, instead of getting me on the mat told me to go on vacation! He said I should stop everything I had planned to do and just go and have fun. This was strange, coming from a Yogi, but I took his advice and went to the Osho Meditation Resort in Pune. I did some workshops which helped me relax and come to a state of let-go.

Back in Rajasthan I started diving into Yoga practice… morning 1-2 hours… evening 2-3 hours. There was no time limit to my practice… I would just let-go into the experience. To make each day interesting Sunil and I would set up new music, create some environment with candles and paint once in a while. The atmosphere was so playful that it pulled me to the mat everyday… no matter what.

Practicing with my teacher Sunil was fun. He would encourage me, make me laugh and let me try different asanas sometimes in a sequence… sometimes not. It was a totally personalized practice which I now call ‘Yoga immersion’, and it became the only important thing of my day.

The experience within me was that I started reuniting with my body. I had to drop all my thoughts, come into the moment and stretch in every pose as if it were my last. Once in a while there was a ‘click’ within. After this my body was so flexible… it was almost as if it were melting. The suryanamaskar would become a beautiful dance! I would be totally recharged from this practice… with one exception though, I refused to do any inversions. I had heard Osho say that inversions, like the headstand, could reduce intelligence, and this stuck with me.

Sunil created sketches on my mat to help me have a reference to stretch correctly. He was using Iyengar’s props for correcting my postures, bit by bit. He also added Pattabhi Jois’ Vinyasa *) (breathing and movement system) to my practice. What I loved to see most was that the practice completely mirrored the mind; when I had too many thoughts my body would become stiff; when I came back to the present it was melting like into fluid!

When I pushed beyond my comfort zone and became like a child I started feeling a distance between my mind and body. In those moments, if there was any pain it was in my body and not in me! So the learning really accelerated!

I had a few insights while practicing Yoga and day by day an inner wisdom started unfolding. I realized that Yoga was a personal practice and had nothing to do with others at all. There was no way of comparing ourselves with others. Every level that we reach in Yoga mirrors the state of our own body and mind.

As we all know, Patanjali is the father of Yoga, and here is how my own experiences gave the meaning to the classical definition of the Eight Limbs of Yoga, his Eightfold Path to Liberation through practice of Yoga. (These steps are called ‘limbs’ because they are similar to limbs of a human being or branches of a tree. All these steps exist together and at the same time build upon each other.)

Classical definition: Restraints and observances, ethical guidelines.
My notes: Using candles in the room and soft music created harmony with my surroundings so that there were only minimal distractions from my practice. I felt my total presence in the room. My senses were alert! I learned the value of creating my own rules that make my practice enjoyable, so much so that I was (and still am) pulled back to my practice on a daily basis.

Classical definition: Seat and posture to line up the body and support subsequent limbs of the eighfold Yoga.
My notes: The asanas were challenging. They were based on Iyengar’s alignment and Pattabhi Jois’ Vinyasa’s practice. Both are recognized as the Master Teachers of Yoga. However, practicing with Yogacharya Sunil was always fun. The sun salutation e.g. would become a beautiful dance; in fact, my family started gathering to watch it. I always felt totally recharged from this practice.

Classical definition: Control the life force/breath.
My notes: Pranayama made me go even deeper! I started becoming more and more still, and then drink the breath. The breathing became more and more effortless and deep. Instead of just filling my chest, I would fill the abdomen, solar plexus and chest. Filling up with breath started having more than one dimension – vertical, horizontal and circumferential. The practice became so amazing that one cycle of breath (inhale – exhale) would complete in more than a minute. I felt so fulfilled! People around me started noticing a big change in my body, my face, my energy. I felt so vital while exploring every moment of the day, feeling complete and contented within.

Classical definition: Withdrawal and numbing out of the senses.
My notes: I became very sensitive and my senses could see, hear, touch, and feel much more. In my understanding the senses could be used for turning inwards as well and connecting with nature. I remember when I once sat under a tree, listening to the sounds of the birds while taking slow and deep breaths, how deeply I felt connected with my surroundings – even with my eyes closed.

Classical definition: Concentration practices to still and quieten the mind.
My notes: The connection with the rhythms of my breath started creating a distance from my body and mind. My thoughts and emotions were no longer gripping me. I had the ability to let them come and go. To be able to be still and let my thoughts come and go also helped me accept them. I was not fighting with them anymore. As soon as I befriended my thoughts, I experienced the quietening of my mind.

Classical definition: Deeper states of focus and meditation to support stillness and quietness.
My notes: The deeper I went, gaps in my thoughts started coming, and those moments became absolutely still. This was the experience of meditation for me.

Classical definition: Liberation, staunching the fluctuations of the mind, ‘flatline’, the gateway to permanently cross from matter to spirit.
My notes: I have no direct experience of this state. The masters like Buddha have seemingly reached that state of liberation, and their teachings come from that space of being. They inspire me to keep going deeper within.

It is very difficult to articulate the depths of my experience. All I’d ask anyone is to take a little risk and jump into the practice… 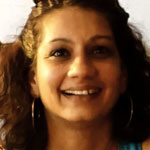 Chetna (Reena Daga) was born in the USA and grew up in Rajasthan, India. She was introduced to Osho in 1979 through her sannyasin parents, at age 5. She studied Engineering in India and graduated in 1996. Since then she had been working as Hardware Engineer and then in Business Development for 14 years in the USA. Since she discovered Yoga she developed ‘Playfully Zen Lab’ encompassing Yoga, Osho Meditations and therapeutic Art at her own studio, called EmptyCupJourney, located in San Diego, CA. – emptycupjourney.com

Chetna talks about growing up as a sannyains kid: My Life in #Hash Notes
Osho The Eight Steps of Yoga 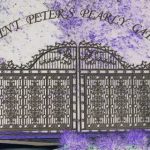 The Eight Steps of Yoga 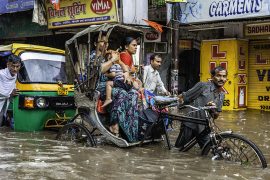 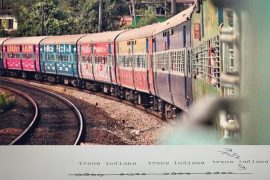 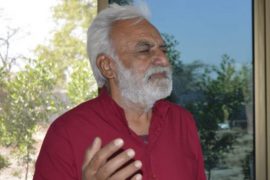 Hearing the call of the eternal