The 4D sphere arose from Johan Van Manen, envisioned in early 1900s, written of by Ouspensky in 1922 in ‘Tertium Organum’. I read about in 1970, mulled over for 20 years and finally managed a solid version in 1993. It took these many years of gestation and several attempts before I felt what could be realised in 3 dimensions. This was not what Van Manen had described but carries some of that significance. 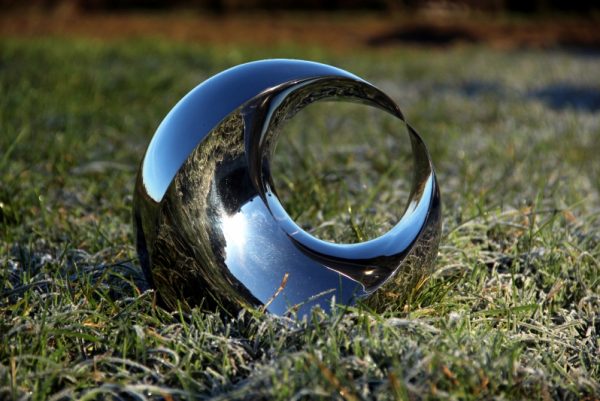 Ouspensky wrote, “The old physics disappears in the idea of a new dimension of space… [in which] there will be no dualism of rest and motion, and no dualism of matter and vacuum. Understanding the universe as thought and consciousness we completely divorce ourselves from the idea of a vacuum. And from this standpoint is explained the small probability of matter… Matter, i.e. everything finite, is an illusion in an infinite world.”

He then illustrates this with Johan Van Manen’s drawing from ‘Some Occult Experiences’, representing a four dimensional sphere, “which Van Manen ‘saw’ by means of his inner vision.”

Van Manen writes, “It was an ordinary three dimensional globe, out of which, on each side, beginning at its vertical circumference, bent tapering horns proceeded, which, with a circular bend, united their points above the globe from which they started. The effect is best indicated by circumscribing the number eight by a circle. So three circles are formed, the lower one representing the initial globe, the upper one representing empty space, and the greater circle circumscribing the whole. If it be now understood that the upper circle does not exist and the lower (small) circle is identical with the outer (large) circle, the impression will have been conveyed, at least to some extent.”

In the days when Einstein had only just expressed his theories on relativity, with which we are now more familiar, the other ways available to describe non ordinary reality were philosophical, religious, mystical, or occult in the sense of hidden, not obvious: i.e. pertaining to the way of seeing, prescribed by the mechanism of mind itself, our viewpoint.

This form has geometry as a neat coalescing of Euclidean and non-Euclidean approaches and at the same time relativises such a point of view. As a sculptural object it carries a balance of form and space so satisfying that the 3D form itself is transcended, and the viewer may be led out of the usual subject object categories. In the world of Zen it is a way to show the significance of emptiness, without which no form is possible.

“Emptiness is precisely form and form is precisely emptiness,” says the Heart Sutra of Buddha. In other words it can bring to the same realisation that all our ideas about everything – including ourselves – are just that, ideas that arise and disappear. There is no agreed language of form in art because we always meet the limit of relativity; “that’s just your point of view” and take the right to share or reject, as neurotic or bland, cash and carry art. We have eaten but not digested relativity.

The insights of Zen have not been surpassed, and being so simple they do not depend on intellect or argument but a clear seeing. It is the relativity of oneself; the net of ideas about oneself, being born and dying, who I am, that constrains us, takes us away from simply being.

If all ideas are relative, what is it to see without ideas, no mind? Perhaps this precious self is only the seedcase of consciousness, and we drift on bigger currents, with no more personal purpose than to meet the ocean. How much freedom can we cope with? This 4D sphere is a window, a view outwards from our continuity of self insistence, an unframed look, and a let go.

The delicacy of the bridge across the symmetry, touching or not quite, held up by the arms, holding the circular space lightly, merging to the solid circle below, all hollowed to the absent half, a greater symmetry of form and formless.

This form/formless balance so exact, offers a glimpse beyond the imagined whole sphere, which is only in our mind; as we expect, so we see. This bubble of reality we inhabit conveniently preforms our length breadth width. Non-Euclidean geometry pops that bubble, unleashes many forms, and the Heart Sutra from Buddha goes further to disclose that emptiness is not just space, curved or flat, space is still an idea in your mind. It takes away that mind which holds reality as an idea, – mind the gap.

It declares form is emptiness, emptiness is form, there is nowhere else each could arise from except the other; they are the heart of each other.

Universe breathes in from you, breathes out you. Upheld in that awareness, the air is full of flowers, trees making love again.

Samvado grew up in England until aged 19, he went to live in Scotland, where he studied psychology. He took sannyas at Medina commune where he took part in the therapist training year. This was cut short and he went to Berlin commune and then Miasto, working mostly as carpenter or in the kitchen. In Pune 2 he had his own wood studio and lathe in No. 3, making two exhibitions there. Samvado lived in Scotland for 35 years then moved to Cornwall in 2003 where he is still living. www.samvadosculpturecornwall.co.uk

A Mountain in China by Veena

Anything goes for a self-taught man!

Mandalas, Om and other friends