Much evidence has been shown in books and documentaries about Jesus not having died on the cross but having traveled to India where his remains are kept, writes Bhagawati.

A recurring topic in the media over the last few decades are speculations about whether Jesus actually survived the crucifixion and made it on foot over a distance of roughly 4,000 kilometers to Kashmir, where he lived to a ripe old age. It is alleged that the Rozabal Shrine (located in the old part of Srinagar) is the tomb of Jesus. Roza is a Persian word, meaning holy, and Bal is Kashmiri for shrine. 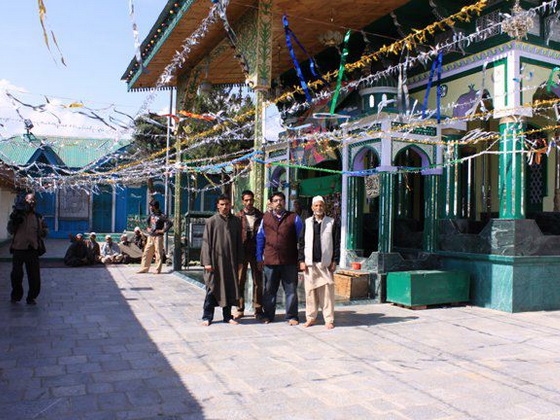 It is said that the original burial place may have been a cave or stone room carved out in the ground, with a simple shelter built over it to hold the false casket that was once full of artifacts associated with Jesus-Yuz Asaf. Ever since the site was first recorded in circa 112 AD, it has attracted visitors from around the world who believed since ancient times, even before the advent of Islam in the region, that this was the grave of the prince, Yuz Asaf (which means son of Joseph).

A book on this theme was published in India five years ago – ‘The Rozabal Line’ by Ashwin Sanghi. Written as a Da Vinci Code-style thriller, it has inspired massive numbers of tourists to flock to the Rozabal Shrine in Srinagar; this is no doubt great for tourism in the area but the influx was so great that the tomb had to be temporarily shut down to visitors.

The Government of India’s Films Division followed suit – releasing a documentary on the topic, entitled ‘The Rauzabal Shrine’.

Anand Krishna, prolific Indonesian author, visited Kashmir and the tomb in 2008. The experiences and insights of his journey have been published in his book ‘Christ of Kashmiris’. He met with Prof. Haji Fida Mohammad Khan Hassnain, a Sufi Mystic and prominent Kashmiri writer and former Director of Archeology in the State of Jammu and Kashmir.

Prof. Hassnain wrote the acclaimed book, ‘A Search for the Historical Jesus’, stating that Kashmiris believe that “a prophet, Yuzu Asaph (the Islamic name for Jesus), came to the valley of Kashmir, two thousand years ago, from Egypt.”

The book includes quotes from various sources, from texts written centuries ago in Kashmiri, Urdu, Persian and Sanskrit, all pointing out that Yuzu was a prophet. Prof. Hassnain concludes that Yuzu Asaph is indeed Issa of the Muslims and Jesus of the Christians who came from Palestine to Kashmir during the reign of Raja Gopadatta (49-109 A.D.).

Osho lines out what really happened during the alleged crucifixion of Jesus and the aftermath:

“… In fact Jesus never died on the cross. It takes at least forty-eight hours for a person to die on the Jewish cross; and there have been known cases where people have existed almost six days on the cross without dying. Because Jesus was taken down from the cross after only six hours, there is no possibility of his dying on the cross. It was a conspiracy between a rich sympathizer of Jesus and Pontius Pilate to crucify Jesus as late as possible on Friday –  because on Saturday, Jews stop everything; their Sabbath does not allow any act. By the evening of Friday everything stops.

The arrangement was that Jesus would be crucified late in the afternoon, so before sunset he would be brought down. He might have been unconscious because so much blood had flowed out of the body, but he was not dead. Then he would be kept in a cave, and before the Sabbath ended and the Jews hung him again, his body would be stolen by his followers. The tomb was found empty, and Jesus was removed from Judea as quickly as possible. As he again became healthy and healed, he moved to India and he lived a long life –  one hundred and twelve years –  in Kashmir.

These two graves don’t point towards Mecca, and the writing on the graves is in Hebrew, which is impossible on a Mohammedan grave – Hebrew is not their language. The name of Jesus is written exactly as it was pronounced by the Jews, ‘Joshua’. ‘Jesus’ is a Christian conversion of the Jewish name. The grave is certainly of Jesus.”

Significant historical evidence exists that also Moses lived and died in Kashmir. A grave site was found that has been maintained for over 2,700 years near the plains of Mowu, once called Moab, about 15 kilometers across from Bandipur. In Deuteronomy we find that Moses was buried not far from there, “in a valley in the land of Moab, opposite Beth Peor, but no one knows his grave to this day.” (Deut 34:6).

Now, what made Moses move to Kashmir? Osho speaks about his visit to see both graves:

Moses had come to Kashmir to find a tribe of Jews who were lost on the way from Egypt to Jerusalem. When he reached Jerusalem his deep concern was the whole tribe that had got lost somewhere in the desert. When his people were established in Jerusalem, he went in search of the lost tribe, and he found the lost tribe established in Kashmir. Kashmiris are basically Jewish – later on Mohammedans forcibly converted them – and Moses lived with them and died there.

Jesus also went to Kashmir, because then it was known that Moses had found the lost tribe there. The doors of Judea were closed – he would be hanged again –  and the only place where he would find the people who speak the same language, the people who have a same kind of mind, where he would not be a foreigner, was Kashmir. So it was natural for him to go to Kashmir…

[…] Pahalgam is named after Jesus, because he used to call himself ‘the shepherd’ – Pahalgam means ‘the town of the shepherd’. So it was a small colony of Jesus and his friends, surrounding the grave of their forefather and the founder of Judaic tradition.”

Another twist to the story is that apparently Jesus lived already as a young man in India. In his book, ‘The Unknown Life of Christ’ (published in 1894), Nicolas Notovitch, a Russian aristocrat who traveled extensively throughout Afghanistan, India, and Tibet, asserted that ancient scrolls reveal that Jesus spent many years in India and Tibet, studying Buddhism and the ways of the Hindu sages. He reports that Jesus left home when he was 13 years old, and traveled with a caravan of merchants via the Silk Road to India (Sindh), to study the laws of the great buddhas.

In Ladakh, Notovitch stayed at Hemis Gompa and found extensive mentions of Jesus in various volumes of Buddhist scripture and literature. Issa, as Jesus became known, studied consecutively with Jains, Brahmins, and Buddhists, and later traveled to Persia, preaching to the Zoroastrians, returning to Palestine at age 29. The book of course created fierce controversy and it was alleged that Notovich took the ideas from H.P. Blavatsky’s ‘Isis Unveiled’.

Osho says on another occasion:

“When Jesus reached India, he must have reached at the time when the whole country was agog with the philosophy of non-violence. He got the idea from India, and that is one of the reasons why the Jews could not accept him. He had got many ideas from India, from Egypt, and then when he came back he was thirty. From thirteen to thirty – seventeen years are completely missing from all Christian accounts. Those seventeen years he spent in Egypt, in India, in Kashmir, in Ladakh, and perhaps in Tibet too. And the vibe of Buddha and Mahavira was still very alive, so it was not his own vision either.”

From Ignorance to Innocence, Ch 2, Q 1

Researching this article, I also found out about an area close to the border of Pakistan called Yusmarg. A group of people live there who are called B’nei Israel, which means – you guessed it, children of Israel. Many Kashmiris say that this is the ancient name of all the people of Kashmir.

In conclusion, there are still some holes in the story. It appears that the graves of Jesus and Moses no longer have any bones or artifacts in them but that the Rozabal Shrine allegedly has Jesus’ remains. I wonder why there haven’t been any forensic tests made. The shrine’s caretaker, Mohammad Amin Ringshawl told a reporter from Reuters once, “Some Christians from the West claim it is the grave of Jesus and they had approached us with a request to exhume the remains for carbon dating and DNA testing. But we refused.”

I Saw A Guy Today

Watch the play of the mind with detachment

Osho, Armenian, and my experience of translating