Suha visits the north-west tip of France in winter. 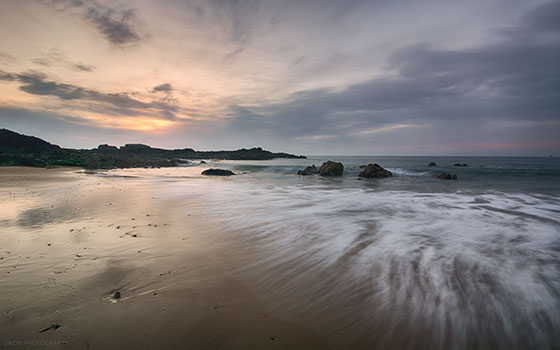 I’m writing from the beach (I found a chair nearby and stuck it firmly into the sand), with all my senses alert to catch this unusual landscape and enjoy my luck in being in this place at this time. This sky reminds me of the Dutch one: it eats up almost all the horizon, particularly if it is wrapped up in clouds that, with extreme assurance and refined elegance, move to the right and to the left, boldly creating, with each passing minute, the most unexpected compositions. I learnt to love clouds when I visited Holland, where the sky is the pre-eminent “landscape”, and where they have no less than six names to denote it. Today the clouds are cheerful, their colours are soft and delicate, and they seem to form a garland on this world of ours. At my feet there is the suck of the sea that is coming nearer, the sun is shining right on my face, I hear the seagulls calling each other from one beach to the other, and feel the strong taste of seaweeds left exposed by the tide. It seems to me that in Brittany I am going through an experience that is outside of time – time that I had carefully boxed and packaged, thinking it belonged to me. One of the things I love of Brittany is its wild appearance, its almost moon-like landscapes, the sea coming and going, a quiet plainness that hides unforeseeable treasures, a beauty that is not showy but allows itself to be discovered, generously rewarding a loving gaze.

In this timeless story, there are three protagonists that slyly, respectfully divide their roles, and are ready, at the first opportunity, to invade each other’s territory: the sea, the wind and the land. In Brittany there is no other subject of conversation: nobody here says good morning or good evening. If you meet someone during your walk, he will tell you something about the sea, or make a remark about the wind. A man does not say words of love to a woman he is courting: he talks about the land, the sky, the catch of fish. A storm is the event par excellence: everybody rushes out to check its violence and admire its poignant beauty. The houses that have been built with local granite are solid and are safe from the fury of the elements, but the bent trees remind us of the bowed backs of worshipping monks, with the difference that the plants never get up again: on one side they are bald because they have been burnt by the salt coming from the sea; and the wind has molded them forever. Everything becomes a sculpture, except the earth that is literally devoured by the sea, and the sand that becomes like water: it penetrates everywhere, and after each storm the men patiently use tools to carry it back from the village to the beach, as if they were bringing runaway children home to their parents.

Rain is treated with respect, for the sake of the earth: they never say it’s raining, they say “grains are falling” (il tombe des grains). It almost always falls obliquely, and seems fragile, at the mercy of the wind, which does as it likes with it; all I can do is to hang on tightly to my phenomenal rubber outfit, which has been designed not to let in drops or sand or wind coming from above, below or sideways. Even the clogs people wear here look like little tanks: you shove your slippered feet into them, bringing the comforting warmth of home with you wherever you go. But even when you are cosily snuggled under the blankets, our protagonists do not leave anybody in peace. Throughout the night, the whistling of the wind and the dull sound of the sea are ubiquitous and accompany, like background music, your surrender to sleep. When, on the contrary, everything is calm – it does happen occasionally – you have the feeling of enjoying an unhoped-for spell of peace and are worried, as if some naughty children were getting ready for one of their terrible pranks or had suddenly fallen ill. And you run to the sea, in order to make sure that nothing has happened to it. It seems unbelievable to see it so placid and peaceful, and you feel proud, as if you had been the one who had managed to persuade it to take a milder attitude.

The weather, like a capricious woman, changes mood every half hour: warmer when it’s raining, cooler under the sun, never cold. The farmers boast that their cattle can stay out of doors during all the seasons, browsing on the bright-green grass even in the wintertime, as if they were on an English lawn in spring. In the morning I am at the port, watching the fish being unloaded from the fishing boats, the patience with which the sailors remove it from the nets, the brilliance of their colours. These gestures are unfamiliar to my life: they fill me with wonder and astonishment. And markets – I have never missed a single one: to see what is most used, what is sold here that can’t be found in Paris, the colours of the vegetables, their size, freshness and price. And, above all, people. I enjoy watching people, hearing them speak Breton, seeing, through the living sculpture of their faces, their worries, habits, dignity, and their narrow-mindedness. Breton is a language that has a harsh, northern sound, with particles that, when they are added before or after a noun, utterly transform it. The names of the villages, towns and streets remind me of ancient fairy tales; when I pronounce them correctly, I feel as if I were coming into a different kingdom, inhabited by simple, hardworking people who never allow themselves to be demoralised by adversities. And the people who love this land and this sea (and are jealous of the insolent glances of the “birds of prey”, as they call the summer holiday-makers), at last, in this end-of-winter period, can enjoy them in peace.

I’ve discovered that I’m attracted by the sea, with an interest I’d never imagined before. But above all I’m concretely experiencing something that’s greater than me, feeling that I’m an integral part of it, and am perfectly comfortable and in the right place. Here nature seems to suggest that there is something that escapes man, that does not stem from him, but with which he must find a bond, through a gesture of love. During this stay, I made peace with the elements of nature: I used to feel always engaged in a struggle with them, as if they were against me: sunshine was bad for my skin, water for my rheumatisms, wind for my eyes. Here I allowed myself to be dazed by the wind, caressed by the sun, lulled by the water, carried by the land, so much so that I realised I wasn’t strong enough to face such an unexpected, important meeting. So, having reached a more reasonable attitude, I am now writing seated on the beach, in a state of complete relaxation.

People tell me that the season I have chosen for this holiday, winter, is the one in which the colours are least splendid; but I decidedly like the defenceless bareness I see. One does not happen often to walk on roads that run along the coasts: most roads have been made near the built-up areas, away from the fury of the elements, and only a single, poorly-traced path leads to panoramic points where the sole companions one can see are immense sand dunes, stripped by the wind and covered with salt by the sea, and rocks that plunge directly into the crests of the waves. On the quasi-island of Quiberon, along the wild coast, they are trying to replant the dunes with pines, but the newly-planted trees need to be protected by a wooden structure that creates a little fortress around each tree. When I see this scene from a distance, it reminds me of rows of tombstones in a children’s graveyard.

The houses, in southern Brittany, are no longer built in the typical granite, but have smooth, unlined fronts, completely painted in a brilliant whitewash that stands out on the brick-red ground. We are quite distant, here, from the slate-rich soil of northern Brittany that colours the hydrangeas bright blue. In this barren expanse where moorland prevails, the lines marked by the pines are completely different, as far as I can remember, from anything I have seen in our landscapes. This is the context in which the stones of Carnac stand: they are testimonies of a memory from 5000 BC, and, in spite of a great number of legends, nobody has ever been able to solve their riddle. I sense that I am in the presence of an unknown civilisation, yet I feel alive, because I realise what a complex social organisation was needed to find, extract, carry and lay all those tons of stone, considering that the part that is buried underground is equal in volume to the part that emerges from the ground. One cannot carelessly convey a boulder from a place to another: it must be left for many months lying on the ground, in order to allow it to get used to its new environment, absorbing the humus of the soil of which it will become an integral part. I love these stones, the pulse of matter, the skeleton of silence, and in their presence I move in a silence that I do not recognise as mine. Only this way I hope to be able to vibrate in unison with them, and perhaps to eventually catch their secret.

In my wanderings through the countryside, I often see some shrines (the places of their yearly “forgiveness” rites), and some “calvaires” or altars with stone crosses that are halfway between the earth and the sky and are stretched out in a desperate prayer for the storm, the sea, and the wind to spare their men. The lives of the sailors’ brides alternate between months of waiting and anxiety when there were storms, and months of celebration: the sailors usually spend four months out at sea and four months at home. Sailors have been described to me as cheerful people, poets, inured to loneliness. When they reach the end of their career, they reject the very idea of a long journey, and are content to go fishing in the open sea and to become rooted in the land. An aged sailor showed me around the lighthouse of which he now is the guardian, and explained to me how it works with the coded signals that allow it to be identified among all the others. There’s the Torch Point, a famous panoramic point that has been given this name because some men purportedly made signals with a torch in order to cause ships to be wrecked on those rocks, thus becoming easy loot.

So here I too have reached the end of my trip through a part of Brittany, which I have seen through the sound of my eyes, the pleasure of my ears, and the warmth of my heart.

The elephant, the horsefly and the sparrow

Last will and testament

The path of words 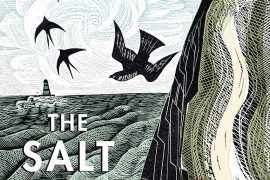