Democracy has become mobocracy, claims Osho, the enlightened mystic. As India celebrates the 70th anniversary of Independence on 15 August, it is a tantalizing issue worth examining, writes Swami Anand Kul Bhushan. Published by coastweek.com, Kenya.

“What we have at the moment is mobocracy,” says Osho, “It is certainly not democracy.

“It is all right for the people to choose their representatives for the parliament, but it should be the clearly defined task of the majority party in parliament to find the best men of merit to administer the various divisions and functions of the government. They have to see to it that the selected ministers are fully qualified for their different jobs. Then we will have meritocracy in the place of the mobocracy that we have.

What does Osho mean by ‘fully qualified ministers’?

They should all be professionals, highly qualified and experienced specialists and experts in different fields of government – like education, health, finance and the rest – and form the council of ministers with them, he advocates.

In reality, ministers are appointed on political grounds to represent all states, communities and vested interests. Even the upper house of parliament designed to add professional expertise, special talent and wisdom is also selected on the very same basis, except for a handful of members from sports and the arts. 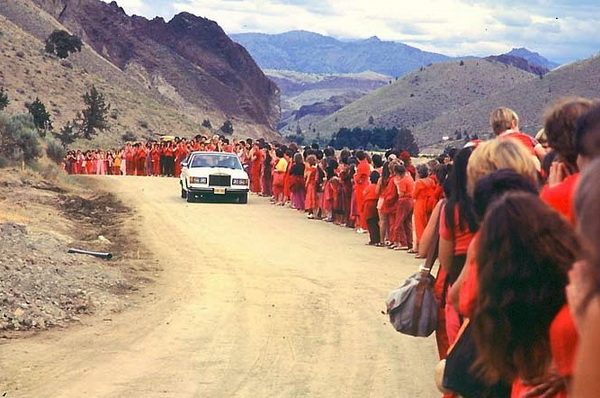 Rajneeshpuram, Wasco County, Oregon, United States – Rajneesh greeted by ‘sannyasins’ on one of his daily drive-bys in Rajneeshpuram. Circa 1982. Photo: Samvado Gunnar Kossatz

In addition to discoursing on leading spiritual masters and almost every spiritual path to enlightenment, Osho has talked extensively on politics and social issues. During the 60s and 70s, he delivered over a dozen lecture series on politics that were also published in the form of books. The titles of these books in Hindi are the best indication of his grasp of political and social realities that are even more relevant today.

‘Bharat key Jalte Prashan’ or ‘Burning Questions of India’ dealing with corruption, population and communal violence among others.

His devastating attack on the sham values of society and politics came in ‘Pandit, Purohit aur Rajneta: Manav Atma ka Shoshak’ or ‘Priests and Politicians: The Mafia of the Soul’.

Socialism was in the news in those days and so Osho provided his insight with ‘Samajvad Arthat Atamhatya’ or ‘Socialism is Suicide’, and ‘Samajvad se Saivdhaan’ or ‘Beware of Socialism’.

Osho’s discourses and book, ‘Bharat Gandhi aur Main’ or ‘India, Gandhi and I’ dissected the contribution and persona of the father of the Indian nation with startling views about his personal behavior which shocked many Gandhi admirers. But Osho was vindicated with a Bollywood movie, ‘Gandhi My Father’ in 2007, which dared to present these unsavoury truths.

Osho’s tour de force happened in 1985 with a front-page coverage headed ‘If I Ran India’ in the Illustrated Weekly of India, the top magazine of that time. Stretching over 15 pages, his sensational insights on politics, governance, corruption, communal violence, population, education and related topics stunned and shook readers across the sub-continent.

These insights have stood the test of time and are equally relevant today, over thirty years down the line.

“Man will remain corrupted till we stop interfering with his nature. Corruption is a by-product. If somebody somewhere is corrupted, that means his nature has been interfered with. And you will never be able to find the real culprit; you will catch hold of this poor man who is a victim.

“In your courts, the people who are being judged and sentenced, imprisoned, or even sentenced to death are not the real culprits, they are victims – victims of a society which has forced them to move in a certain way, to become a certain way which they never wanted. They were always resisting.

“Every child resists as much as he can, but he has limitations; he cannot resist too long. And he is dependent on you.” (3)

No matter what the topic, Osho never fails to shock and awe.

Quotes by Osho from

The well that made everyone go mad

An Open Letter from Guam to America

I’m in the studio