This is not a huge typo: Villages across Norfolk (UK) have been forced to spend a small fortune on new road signs so that locals can understand them. Ian Bred writes in the Suffolk Gazette. 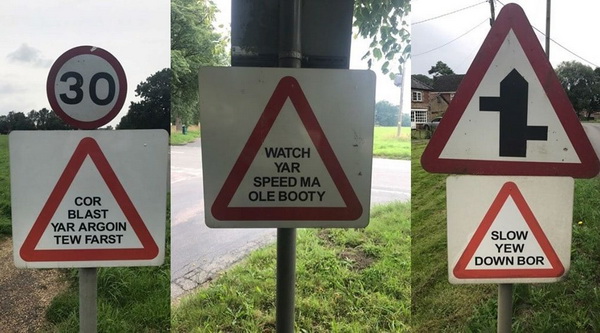 The road signs are written in the backward local language so that Norfolk people can tell if they are going too fast.

They are cropping up all over the county, but one visiting motorist, who was risking life and limb by crossing over the border from Suffolk, found three in the same village of Old Buckenham, near Attleborough.

“It’s rare to see three in the same place,” the motorist, who asked not to be named for safety reasons, said.

“The local language is quite quaint, to be fair,” he added. “But it does rather add to Norfolk’s reputation of being a medieval throwback.”

Norfolk County Council said villagers were concerned that local horses and carts were passing through at over 7 or even 8mph, and had asked for warning signs that could be more easily understood.

A spokesman said: “Occasionally a real car visits from abroad in Suffolk. That really puts the wind up the locals and they can’t comprehend it.

“The sheer speed terrifies them, and they simply stand and point at the cars.”

Local turnip farmer Bubba Spuckler said: “The pace of life here is fast enough without having traffic passing through at the speed of light.”

Mr Spuckler, who lives with his sister and their eight children, added that he had been in a car once and didn’t much care for it.

After successful tests on the Norfolk Broads waterways, plans are now under way to introduce a 6mph speed limit across the whole of Norfolk.

‘The Freedom of Having Nothing’ 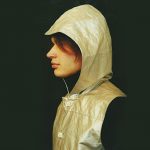 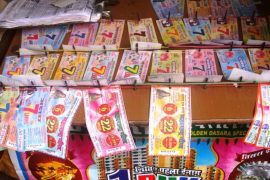