Humanity hanging on a cross of iron

“Every gun that is made, every warship launched,
every rocket fired signifies in the final sense,
a theft from those who hunger and are not fed,
those who are cold and are not clothed.

This world in arms is not spending money alone.
It is spending the sweat of its laborers,
the genius of its scientists,
the hopes of its children.
This is not a way of life at all in any true sense.
Under the clouds of war,
it is humanity hanging on a cross of iron.”

During World War II, Eisenhower was a five-star general in the United States Army and served as Supreme Commander of the Allied Expeditionary Forces in Europe and also led the invasion of France and Germany in 1944–45 from the Western Front. 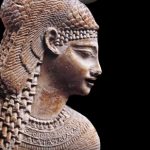 The time has come

Dismiss whatever insults your own soul