Shahid remembers playing his trumpet for drive-by in Rajneeshpuram and discourse in Pune.

As today is my 36th sannyas birthday [February 22, 2018], I want to share a couple stories about my playing music at Rajneeshpuram. This photo, which appeared on the cover of the Rajneesh Times in January 1985, is the only photo I know of with myself and Osho in it.

As drive-bys evolved into wild, energetic musical affairs, I gravitated to other horn players, not wanting to be the loudest instrument around. When the Share-A-Home program brought in some real street musicians, I chanced upon a group of drummers getting down close to Devateerth Mall. Shabdha Nur and Vedant (and sometimes Prem Joshua) joined me in jamming out with these excellent drummers. We just let the energy take us to soaring heights, taking turns with melodies and harmonies.

When Osho reached this wild ecstatic happening, he stopped for perhaps five minutes at a time, throwing energy over us in a prolonged orgasm of bliss. I recall only laughing and lying on the ground after he moved on, not sure what I was, or if I was. Of course, we all wanted to get together for a repeat energy darshan each day.

Within a few days, when I went to check out the community coronet from the instrument shack, since my trumpet was too far away to retrieve, I was told by the German swami that, “You will play the assigned song today, or you will not play at all.” My response was, “But Bhagwan loved it, doesn’t that matter?” He replied, “You know it does not. We are all one and we will all play the same song.” I laughed and said, “Yes, we are all one, but we don’t have to act like we’re all one. We all have our own contribution.”

I went to the usual place with the conga players and when Vedant came, he asked if I’d also been warned about jamming. I said I had and it pissed me off. Just then, a huge German swami stood between us and asked, “Did you get the message today?”

The Rolls Royce was in sight and I was very triggered so I just walked away, up the line, looking for a new place. Having a trumpet made it easy to find, as those without instruments wanted us to stand by them.

I found Shabdha Nur and told him how angry I felt. He said, “What’s the difference? If they want us to play the assigned song, why not just play it?”

I did so, but the seeming curtailment of creativity, individualism and freedom, which I considered pillars of Osho’s vision, still had me in its grip. As Osho approached, I stepped way backward, feeling embarrassed for him to see me so angry. I closed my eyes and played the song until I was sure he must have passed. When I opened my eyes, he was parked right in front of me, throwing his waves of bliss, as if saying, “You can’t hide, I see you.” I was obliterated and couldn’t recall how to play anymore. I put the trumpet down, he gave me that “Gotcha” smile and drove off.

On another occasion, I was playing at drive-by when a very excited reporter who was taking photographs of Osho, suddenly turned and ran straight into the bell of my trumpet. I got a hell of a smack and my lip was split open. The photographer was frantic with apologies and trying to check on the damage. I asked if he was okay, gave him a quick hug and pointed back to Osho, saying, “Look, he’s here.” I couldn’t play, of course, with all that blood running down my chin but managed to dance.

Having that huge hit, right as Osho was approaching, made me feel there was some significance to it. Was I playing too loud for him? Was it becoming an ego trip? I didn’t know, so I wrote a question to Osho describing the situation and asking if I should stop playing. The note which came back, although I always wondered if he ever saw these questions, was “No need to stop playing. Enjoy.” Sounded like him.

It wasn’t until years later, I met a swami who had dinner with that reporter that same night. He said the man was flabbergasted that I had met him with so much love; he thought he was going to get punched. The reporter supposedly said that he could see how we were really transforming ourselves and that he wanted to come back when he was not on assignment, for himself.

In Pune 2, I arrived shortly after Osho returned to Pune. I was welcomed to the band which played morning and evening discourses. Every two days or so, I would get a turn to play for thousands of sannyasins in his dancing presence. So many wild experiences here, with true professional musicians. As I left Pune in May of 1989, the India Airline people destroyed that trumpet. All that was returned was the twisted brass and the “Fragile” sticker which I had put on the outside of the case.

Author and wildland firefighter Sw. Atmo Shahid (aka Daniel S. Johnson) was classically trained in the trumpet for playing in his high school orchestra and marching band, but the peak of his musical career was playing for the Master at drive-bys and with the discourse bands in Pune 2. He presently resides in his Osho Magga Baba creativity retreat in Colorado when not fighting national wildfires.

Leaving India and the best shave in the world 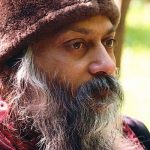 They say I am the Hugh Heffner of the spiritual world