Padma presents her Calendar for 2019, showing artwork she did between 1998 and 2018, and reminisces about the time Osho told her to drop all ideas of sitting silently, but rather abandon herself in creativity. He had said to her, “Creativity is your meditation.”

I firmly believe there is a right time for everything and I’m delighted to say that this art calendar project has finally found it’s time… and it looks marvellous! The artworks selected for the 12 months (of 2019) span the last 20 years. I have chosen artworks representing different creative expressions that correspond to important chapters in my life.

This calendar has no holidays! What a relief to have 365 clear days that invite life in it’s unfolding. This format is intended to prompt living in the Now by embracing each day as an opportunity to fully experience what life offers. So, if you feel an important day is coming up, record it on that day; or if something worth noting happens, put it on the calendar as well. After all, we deserve a break from the burden of tradition, our conditioning and societal identities. On this tabula rasa calendar you have the opportunity to take more responsibility for creating your year ahead. No more holiday captivity!

Completing this project has brought forth a flood of memories regarding the many years I lived in Osho’s communes starting in Pune 1, then Rajneeshpuram, and finally in Pune 2. Those years were overfull with blissful creativity, while I was entrusted with the Master’s commune as personal canvas to freely create upon. Osho invited me to embellish, design, paint and illustrate his vision without encumbrances. I became a vehicle through which his beauty and artfulness was expressed, especially his colorful approach to squeezing live’s juices and his flair for presenting the unexpected. His invitation gave birth to theatre productions, fashion shows, publications, murals and the beloved Osho Zen Tarot and Tao Oracle decks.

For me Osho was the ultimate Master of free-flowing creativity in all its forms. When I became his disciple in May 1975, he told me to drop all ideas of sitting silently or practicing certain techniques, rather I was to abandon myself in creating as he said, “Creativity is your meditation.” He was a role model as well as my art mentor.

When the therapy groups first began, I longed to participate, but the Master continuously steered me back to creating. There were times when I felt that all the juicy stuff was happening elsewhere while I was left alone with a paint brush or a sewing machine. His unceasing direction kept me on track toward what transpired as self-discovery. My unique path unfolded gradually in a rainbow of color, patterns, light and many blessings. By trusting his guidance, I witnessed myself in a dervish swirl of expression that seems never ending. Even today, at age 72, creative energy continues to surge and seek an outlet for manifestation.

Pulling this calendar together has shown me how, in some respects, life in the marketplace is an increasingly complicated affair. The impulse to share this new creation with lovers and friends was met with many hurdles, some of which were daunting and overly complicated. Nevertheless, my badger spirit kicked in; I relentlessly persevered and finally found a web company called Shutterfly who produce the very best quality calendars. They package it and post it to anywhere in the world while relieving me of that pressure. And you’ll soon have the Illuminations Calendar for 2019 by Deva Padma shining in your home for all next year.

Let’s pretend we’re walking together past Buddha Hall and I’m offering this new creation to you with a smile and a namaste.

Illuminations Calendar 2019
The Art of Deva Padma
– 12×12″ (30×30 cm)
– One month per double page
– With quotes from Dr Seuss to Bob Marley, from the Dalai Lama to, of course, Osho
– The month of August shows the image that was chosen by New Earth Records for Deuter’s soon to be released album ‘Mirage’
– To purchase the calendar go to Padma’s website where you find instructions for the few steps that need to be followed: www.embraceart.com

Love Osho’s interview with Padma will go online on November 9, 2018.

St. Augustine is asked to give a gist of his message 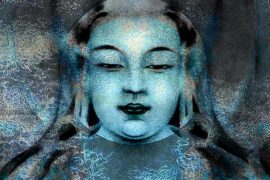