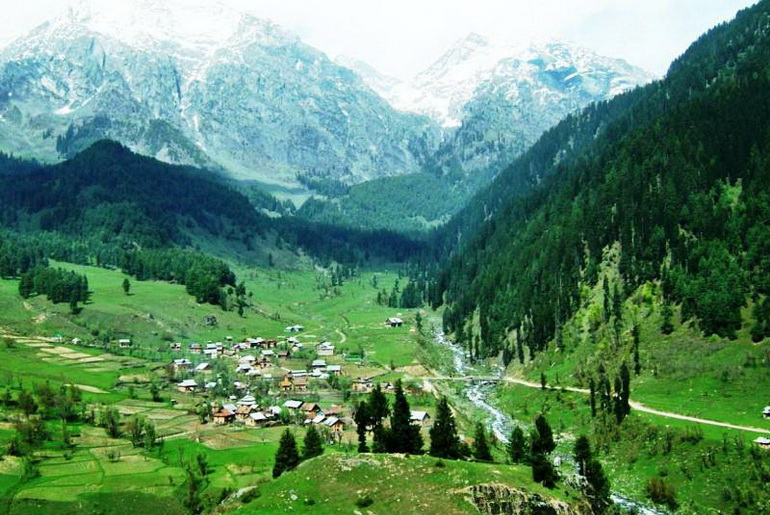 Pahalgam (also known as Pahalgaon) is located in the charming Kesar valley about 95 km east of Srinagar in Kashmir. Each year in July or August thousands of Hindu pilgrims are walking their yatra (pilgrimage) partly on ice to the famous Amarnath cave in that area.

A holiday in Srinagar

Shri Sundarlal Jain from Delhi was the organizer of the Pahalgam camp held from September 17 to October 3, 1969. He had suggested to Osho that he should spend a few more days to enjoy the overwhelming beauty of the Himalayas; hence Osho scheduled his arrival in Kashmir for ten days prior to the camp’s start.

The journey began in Jabalpur, from where Osho and his entourage embarked by train to New Delhi and continued by plane to Srinagar, staying at the cottages near Chashme-Shahe (one of the Mughal gardens built in 1632 CE by Ali Mardan Khan, a governor of Mughal emperor Shah Jahan) at Dal Lake. Dharm Jyoti was among the friends accompanying Osho and she would also be recording the discourses during the camp, taking turns with a few others.

Author of many books on Osho in Hindi and English, Gyan Bhed recalls, “Acharya had the desire to enjoy the invaluable treasure of natural beauty in the charming valley of Kashmir in his heart for a long time. Consulting his diary, he postponed some of the planned programmes and headed towards Kashmir. He viewed the glacier in Sonmarg. He was astounded to see the exquisite beauty of the safeda (white trunk) trees standing on either side of the road like sentries. He reached Khillan Marg on the back of a horse and enjoyed sliding on a sledge there. He also enjoyed boarding a shikara (houseboat) in the Wular and the Dal lakes. It was the time when the entire valley was full of flowers and fruits.”

Osho stayed in Srinagar for a week; he then moved on to Pahalgam by car while Jyoti and some friends decided to ride to Pahalgam on horses through the mountains, which Jyoti admitted had been a rather exhausting journey.

Having settled in Pahalgam, after asking directions from the watchman at the dak-bungalow he was staying in, Osho walked to the local graveyard and observed every grave very carefully. Suddenly he pointed to two graves and said to Sundarlal that those belong to Moses and Jesus. And he told him of testimonies in religious literature about the event that Jesus did not die on the cross but having travelled to Kashmir, where he fathered a family and died there at an old age. He also told him that the meaning of both Gadarwara (where Osho grew up) and Pahalgam is The Village of the Shepherd.

On another day, Osho drove to Srinagar to see the Chief Minister of Jammu & Kashmir, Sheik Abdullah, to whom he had already been introduced by Masto Baba in Delhi some years ago. During their conversation it became evident that the Sheik had no intention of permitting Osho to buy any land in Kashmir for the setting up of an ashram and heritage in the mountains. In Delhi, in the presence of Pandit Nehru, Sheik Abdullah had indeed promised to help Osho if needed, but now he admitted that because he was afraid of what might happen in terms of religious disturbances in the future, he could not allow Osho to purchase any land or to settle down permanently in Kashmir. The situation in the divided state and the tensions between Muslims and Hindus were such that this idea had not the slightest chance to succeed.

The structure for the meditation camp was an hour-long discourse in the morning and one in the evening, followed by 15 minutes of meditation. In the afternoon Osho used to meet the participants between 2 and 3 pm, and following this session was a one-hour long satsang in deep silence in his presence. Osho had also suggested for the participants to remain in silence during the entire time of the camp.

The discourse series throughout the camp was called Mahavir in My Opinion, during which Osho spoke on deep esoteric matters. The format of the discourses was the well-known combination of discourses alternated by sessions where Osho answered questions people had put forward to him.

It was the first occasion where Osho spoke publicly in English. Not only for the few Westerners present  but also for his Indian listeners – to join this camp seekers had arrived from Bombay, Gujarat, Delhi, Ludhiana, Haryana and Rajasthan. With these many languages and regional dialects it was quite common to use English as lingua franca. From then on English was used by Osho when addressing Western as well as his Indian audiences.

Laxmi had persuaded her maternal uncle to accompany her and join the camp. All in all, sixty people participated, and Osho’s talks in the discourse series were recorded on spool-to-spool tapes. Laxmi remembers that they were overwhelmed with the perspective he provided on Mahavir. To them it was a fresh journey with Mahavir, a new experience.

The famous photo: Osho sitting on a horse

Osho liked the typical outfits of the Kashmiris very much. Jyoti recalls that one day during the camp Osho suggested that his friends go to the photo studio in town and have their photo taken dressed in traditional Kashmiri garments.

Jyoti recalls, “We are excited with his idea and go for it. After our photos are taken, we ask the cameraman if he can come with us to take a photo of Osho sitting on a horse wearing a Kashmiri outfit.

“Osho is sitting on the veranda with some friends. Seeing us coming with a horse and a cameraman, he understands our intention and says, ‘Here comes the trouble.’

“Hearing this I tell him, ‘You have troubled us all. Now please get dressed in this Kashmiri dress. We want your picture on the horse.’ Other friends are surprised with my remarks but Osho smiles and gets up from the chair and says, ‘Okay, as you wish.’

“In a few minutes he comes out dressed in Kashmiri dress looking like a Mughal emperor with a mischievous smile on his face. The cameraman is waiting with the horse on the grounds near our cottage. Osho walks gracefully and slowly to the horse and pats him. He rides on the horse, looks at us smilingly and the camera clicks. Next day, we get this beautiful picture of Osho sitting on the horse like the emperor of Kashmir.”

Much later, Osho commented on this incident:

“There is only one picture, which they go on publishing all over the world, in which I am riding on a Kashmiri horse. It is just a picture; I was not really riding. But because the photographer wanted me to be photographed on a horse, and I loved the man – the photographer, I mean – I could not say no to him. He had brought the horse and all his equipment, so I said okay. I just sat on the horse, and you can even see from the picture that my smile was not true. It is the smile when a photographer says, ‘Smile please!’”

(Read longer excerpt: I used to go on my horse)

After the camp, an expressive article was written by Kishori Raman Tandon about his own journey to Kashmir and his experiences during the camp. It was published in Jyoti Shikha (ज्योति शिखा), Vol. 15, 1969 and also included four photographs. Jyoti Shikha was the first periodical, a quarterly magazine, to serve as a vehicle for Osho’s work, reporting news, events, discourses and contributions from his people. See more about the magazine at Sannyas Wiki.

In this article is also a mention about Osho meeting with Maharishi Mahesh Yogi who was in those days famous in Jabalpur for his emotionless Bhavateet Meditation, and the teaching of his Transcendental Meditation with its 20-minute repetition technique of a mantra. Maharishi happened to be in Pahalgam at the same time as Osho.

Another article in the same edition of Jyoti Shikha written by Manik Lal Bafna shows a compilation of questions Maharishi Mahesh Yogi’s disciples had asked Osho. Western and Indian followers of Maharishi invited Osho to talk to them during their own camp at Pahalgam, and Osho agreed.

Jyoti recalls: “I take my little cassette recorder and join with two more friends in the car in which Osho is going. In about ten minutes, the car stops near a bungalow which has a beautiful big lawn in the garden. Lots of chairs are around. Mahesh Yogi is sitting on a chair talking to his disciples, who look very excited as we reach there. Osho namastes everyone with folded hands and sits on the chair next to Mahesh Yogi. I sit next to Osho with the recorder in my lap. There is no mike arrangement. Mahesh Yogi continues talking to his disciples for a while, explaining to them about the different paths leading towards the same goal. I look at Osho; he is sitting with his eyes closed.

“One of Mahesh Yogi’s disciples expresses his wish to hear Osho. There is a pin drop silence for a moment. Osho opens his eyes; I am holding the microphone in my hand to record his talk. Up till now, I have never heard Osho speaking in English to a group of Westerners. Maybe it is his first talk in English. It is more like a dialogue than a discourse. I hear him say, ‘There is no goal; the question of paths does not arise. All paths take you away from yourself. You are simply dreaming…’

“Mahesh Yogi’s disciples are conditioned by his teachings about different techniques. They start arguing with Osho. I can see they are not open and receptive; their minds are full of borrowed ideas. Still, Osho is answering their stupid questions for about an hour. Maharishi Mahesh Yogi looks very disturbed. Osho can destroy his whole business, which is based on teaching people transcendental meditation. He does not allow Osho to finish his talk and interferes by trying to explain to his disciples that Osho’s approach is different but he means the same thing. I am simply surprised by his stupidity. He is trying to protect himself by compromising with what Osho has said.”

Osho specifically explained to Maharishi’s disciples that their chosen method of meditation, the muttering of a mantra, would lead them nowhere, but only into an illusory state of auto-hypnosis. Even when chanting a mantra, the mind keeps itself occupied, and only by doing nothing, remaining totally alone, that very moment would lead them to their inner depths.

Sources
Osho Source Book by Swami Anand Neeten
The Rebellious Englightened Master Osho by Swami Gyan Bhed
One Hundred Tales for Ten Thousand Buddhas by Ma Dharm Jyoti
Quote by Osho from Glimpses of a Golden Childhood, Ch 10
Sat Sangha Salon – English translation of Osho’s answers to questions from Maharishi Mahesh Yogi’s disciples
With thanks to Satya Anuragi for the Jyoti Shikha images
With thanks for Jared Stoltz for the image of Osho and Maharishi Mahesh Yogi

Bhagawati is a communicator, writer and author with a penchant for gardening and India.

I used to go on my horse

Osho, an invitation to explore ourselves and rediscover our being