“You can’t please everyone. If you try, you lose yourself,” comments Osho. 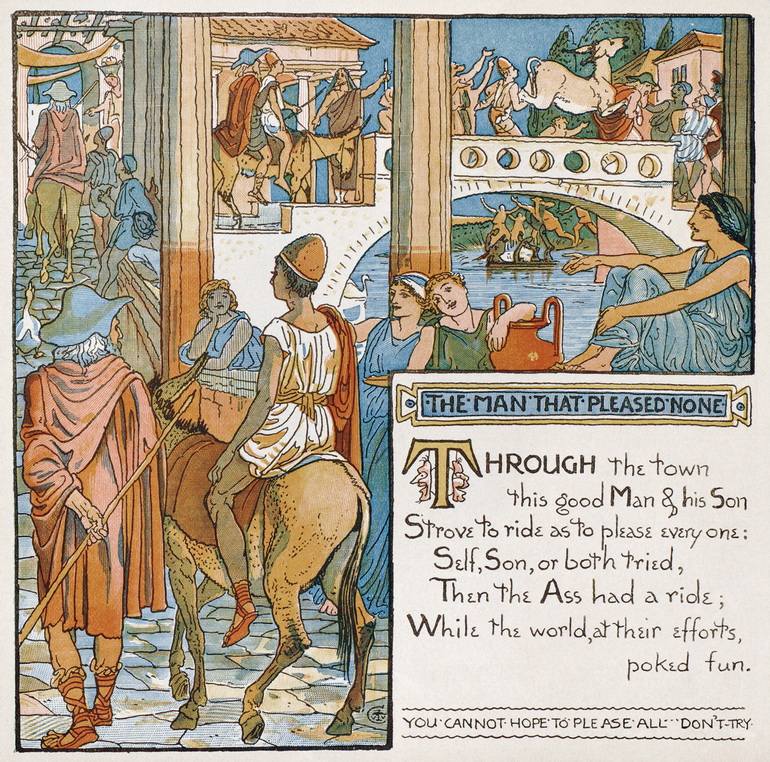 …remember, you cannot satisfy all – that is not possible, and I am not interested in it either.

It was a bright sunny morning in a mountain village. An old man and his grandson were going to the market in the large town in the valley to sell a donkey. The donkey was beautifully groomed and brushed and they set off happily down the steep path. In a while they passed some people lounging by the side of the path.

“Look at that silly pair!” said one of the onlookers. “There they go, scrambling and stumbling down the path, when they could be riding comfortably on the back of that sure-footed beast.”

The old man heard this and thought it was right. So he and the boy mounted the donkey, and thus continued their descent.

Soon they passed another group of people gossiping by the wayside. “Look at the lazy pair, breaking the back of that poor donkey!”

The old man thought they were right, and since he was the heavier, he decided to walk while the boy rode.

In a little while they heard more comments. “Look at that disrespectful child – he rides while the old man walks!”

The old man thought they were right, and it was only proper that he should ride while the boy walked.

Sure enough, they soon heard this: “What a mean old man, riding at his ease while the poor child has to try to keep up on foot!”

By this time the old man and the boy were becoming increasingly bewildered. When they finally heard the criticism that the donkey would be all worn out and no one would want to buy him after the long walk to the market, they sat down, dejected, by the side of the road.

After the donkey had been allowed to rest for a while, they continued the journey, but in a completely different manner. Thus it was, late that afternoon, that the old man and the boy were seen gasping breathlessly into the marketplace. Slung on a pole between them, hung by his tied feet, was the donkey!

As Aesop said: “You can’t please everyone. If you try, you lose yourself.”

Stop throwing responsibility on the other

At least humanity should be one

In search of the bees (and being)

Sudhananda – The pure beauty of music