Part 1 of ‘Tales from Arjuna’, the singing security guard in Rajneeshpuram.

I recall that Leno and I were the first six people picked to be Rajneesh Security after the Portland bombing.

In my case it happened because by chance I managed to identify Stephen Pastor, the ‘hippie’ guy and meet their African American ringleader in the Portland Hotel Rajneesh bombing. That bombing was ‘Plan B’. They had first come down to case out the Ranch and rent some horses for a horse-riding tour.

I was pulling into town, driving my Bug Mobile. The car looked quite nuclear-war, post-apocalyptic. That half burnt two-door, blue sedan with a big hole in the floor before the front passenger seat. In the long back seat a row of white plastic buckets of fly food laced with ammonium carbonate for my traps. The flies just LOVED that urine-like bouquet. The Bug Mobile ever trailed a cloud of flies trying to catch up.

I came to the main street intersection with the Dadu barn office on the left, the Ranch House with poplar trees on the right. There was this hippie unsure about my car, about me. (Maybe it was the smell and the happy cloud of flies.) I was looking wide-eyed in wonder at this fish out of water in a red sea of sannyasins, pensively crossing the street in front of the Bug Mobile, glaring at me. Half-way across he yelled, “Don’t worry, I’M OKAY!!” Looking anything but OK.

Suspect number two, a chubby Jewish-American looking guy was talking up a Ma on the corner of the Dadu barn. He was cheerful but also looked and energetically felt out of place. That was Steven Pastor. The man who later that evening driving back to Portland would set bombs in the Hotel Rajneesh.

I parked my car where it wouldn’t be a health hazard, then ran upstairs to the second floor of the barn where the farm department Dadu office was. It was my day to fill in for lunch duty. Nobody was in the building so I rested my head on Neehar’s desk digesting my sandwich and dozed. Then I felt a presence. I hadn’t heard him come up the stairs. There was this thoughtful black guy off to the side where the hay used to be stacked at the top of the stairs. He was watching and measuring me. I don’t know for how long.

I startled, a bit embarrassed, stared back.

He smiled and said, “You should be more aware…”

The Ringleader was there to rent the horses. I had been for two years in deep kinesthetic ‘worship’. I became the physical energy of my strong body at work. It was a way Osho was purging me of an intellect he said was “full of junk!” – in his talk to me moments after I was initiated in Pune in 1980. For my first year on the Ranch I had been so completely removed from any intellectual pursuit that I’d forgotten even how to do a transaction with money and carbon copy receipts. So I innocently asked the Ringleader a question.

“Can I have your address?”

Suddenly gone from his face was the cool and collective mask. He was on guard. An uncomfortable pause deadened the straw and manure-perfumed air of Dadu’s upstairs barn office.

“What do you need that for?”

Then the cordial mask reappeared and he took his leave.

The three didn’t take that horse ride. They soon left the Ranch, a bit spooked by the pleasant people living there, making them feel out of place. It’s a lesson on how innocence can protect. Where being reflects evil back on those who think to do evil to you and makes them self-consciously back away, unaware why.

That night (29 July 1983), Stephen Pastor, without the other two set his bombs in the Portland Hotel Rajneesh. I answered Sheela’s call for witnesses to share what they saw about the three people. I described to Sheela my story of how I came across all three. I assume that’s what got me in as one of the first six Rajneesh security guards.

The arsonists caught red-handed by red people with malas

I think Leno was with me the day we were posted on the other side of the river with a good view of downtown Rajneeshpuram when we watched a truck pass behind Noah’s Ark boutique on the way out of town – via the back way past Pythagoras clinic down the Mitchell County Road – when a trash bin erupted on fire. We were certain it was the truck and had our security guys with walkie-talkies at Pythagoras post catch the license plate of that truck.

We reported it to the Oregon State police. They did visit those guys and told them if another fire erupted on the Ranch they’d come and arrest them. Magically all the arson fires we were having on the County Road and other edges of our ranch ended. People still shot out the power transformers.

I recall sitar player Govind relieving me at my post overseeing the John Day River one day, near the truck farm, Surdas. About 20 minutes later he was fired upon by rednecks in a river raft. He hit the dirt and tried calling dispatch but once on the ground the signal couldn’t carry.

He finally got through to headquarters that he was under fire. Sheela heard about it, took her posse in a jeep, packed her side-arms and drove down to the John Day river bridge where most river rafters disembarked, right when those guys floated to shore and scared the shit out of them. When Sheela was on track, before Puja enabled her drug, alcohol addictions to weather the stress of her ‘worship’ (rather than meditation), Sheela was our tigress, defending her neo-Sannyas cubs and tiger master. The addiction story I witnessed firsthand. I’ll leave that for another telling.

Related article on Osho News – We need to have tougher security

Arjuna is an expert on the prophecies of Nostradamus, speaker and author of 1,000+ articles and 46 published books published in 20 languages. hogueprophecy.com – facebook.com

Come! Let go and dance your way to God! 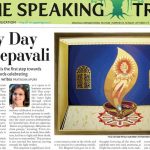 Every day is Deepavali

Man and woman both together are one whole 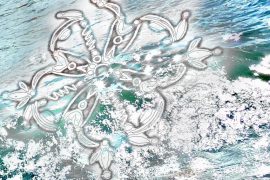 You Never Touched the Ground when Walking 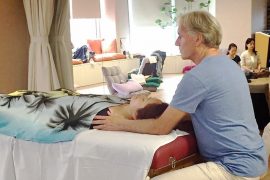