A most likely irregular copy of a Rajneesh Foundation Newsletter has been found. 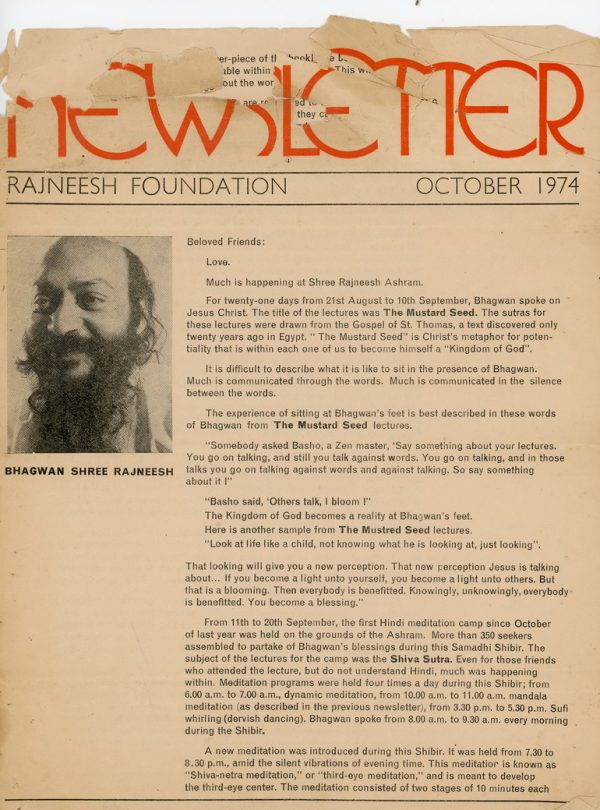 Dated October 1974, it preceeds the Rajneesh Foundation Newsletter (Indian newspaper) which was released for the first time in December 1974. We assume the publisher also for this issue was Ma Yoga Laxmi.

The newsletter informs about the previous and upcoming discourse series in English and Hindi, the introduction of a new evening meditation called ‘Shiva-netra’ to develop the third eye centre, news about the expansion of the ashram (the plot adjacent to no. 17 has been purchased), new building projects (including a large underground air-conditioned meditation hall), new book releases in Hindi and English, the launch of a new book by Aubrey Menen with Bhagwan prominently featured and more.

Much is happening at Shree Rajneesh Ashram.

For twenty-one days from 21st August to 10th September, Bhagwan spoke on Jesus Christ. The title of the lectures was The Mustard Seed. The sutras for these lectures were drawn from the Gospel of St. Thomas, a text discovered only twenty years ago in Egypt. ‘The Mustard Seed’ is Christ’s metaphor for potentiality that is within each one of us to become himself a ‘Kingdom of God’.

More to be read on in the scans of the newsletter in the slide show (go full-size).

With thanks to Anand Anuragi

The greatest enemy today is science