“The Mumbai Charity Commissioner has called both sides on June 6, 2022, for a crucial hearing,” writes Shantanu Guha Ray in Money Control on May 28, 2022.

People close to the commune say this could set the tone for the future of the Koregaon Park centre. The commune is now mired in its worst controversy. Two sections of Osho disciples are at loggerheads over the proposed sale of two plots of the Koregaon Park Centre. (Illustration by Suneesh K.)

Crowds have thinned at the abode of Osho, the Indian guru with piercing eyes who called his commune the IBM of peace and love.

Only a handful enroll now for the courses, unlike hundreds who once crowded what was known as the spiritual supermarket in the city’s upmarket Koregaon Park.

Visitors at the curious empire that is styled like the proverbial Xanadu of magician Mandrake are encouraged to speak less and absorb more. Absorb what? Absorb peace, says Ma Sadhana, a top sannyasin at the commune. She walks through the commune’s landscaped gardens that resemble a tropical forest.

She will not talk about the recent dustup surrounding the proposed sale of the six-acre home. “It is all sub-judice, let’s not talk. See the commune, feel Osho’s ideology.”

Those who drop their normal dress for the commune’s traditional maroon coloured robes, call the course Rajneeshism. There are no celebrities at the commune. Once there was Terence Stamp, Vinod Khanna, Parveen Babi and Kabir Bedi.

There is a dome that is home to the Osho, the master rests there. He died of heart ailments on January 19, 1990. There is a glass house that stores an ageing Rolls Royce. It belongs to Osho, he reportedly had 85 of them when he was in Rajneeshpuram, a 64,229-acre ranch bought by his followers in the US. He then wore gem-studded Rolex watches, he was called Bhagwan (God) when he was only 48.

Ma Sadhana wants to do the walk but not talk, she firmly believes Rajneeshism will rise once again like the proverbial Phoenix, the sun bird.

The commune is all about Osho, a firm believer in free love. He propagated a cult of materialistic spirituality and inspired thousands – including celebrity devotees – to follow him. He called his home the unknown.

There is a strange silence in the air.

The commune is now mired in its worst controversy. Two sections of disciples are at loggerheads over the proposed sale of two plots of the Koregaon Park Centre. Disciples from Pune and Mumbai do not want the sale to happen. But members of the Zurich-based Osho International Foundation (OIF) which owns the commune in Koregaon wants to sell the land citing losses due to Covid-19. OIF has sought permission from the Mumbai Charity Commissioner for the same.

Pune’s celebrity resident Rajiv Bajaj and his family are ahead in the race for the two plots of the commune. Bajaj has bid Rs 107.5 crore and even paid an advance. Bajaj’s bid is higher than a bid from Atul Ishwardas Chordia, chairman of Pune’s Panchshil Realty (Rs 90 crore) who has built some of Pune’s landmark properties like the JW Marriott Hotel and a Bulgari Hotel in Maldives. A2Z Online Services Pvt. Ltd offered Rs 85.5 crore and is placed third. A mail to Bajaj’s office remained unanswered at the time of publishing this story.

But then, there is no sale.

The OIF, in its application seeking permission for the sale, said it has a severe cash crunch and that meditation classes have come to near nought at the commune since March 2021. OIF said it has no cash to maintain the premises and properties of the trust in Pune. It even claimed Bajaj paid an advance of Rs 50 crore [6.5 million $] as earnest money. So the sale is the best way out.

OIF applicant Mukesh Sarda, who moved the application on December 16, 2020, before the Charity Commissioner for the sale of two government leasehold plots (number 15 and 16) of the ashram “under section 36(1)(a) of Maharashtra Public Trust Act 1950”, will also be there. Sarda has claimed he is among the four main trustees of the commune.

The total land, as per the application, measures 9,836.20 square metres. It includes a huge bungalow and other dome-shaped structures Osho built for meditation. As per the valuation report, the properties are worth Rs 92.11 lakh [118’000 $]. That means it is less than Rs 1 crore. This amount is reportedly mentioned in Sarda’s application. So why such a high valuation hovering between Rs 80-100 crore? No one has an answer.

Ma Sadhna [sic] reiterated in an email that she will not be in a position to comment because the matter is sub-judice. But what she and her friends have told the Mumbai Charity Commissioner is that the commune is now run by public charitable trusts over the last three decades. And that the Zurich-based OIF is not the owner of the Osho Commune. It is now owned by public trusts registered with the charity commissioner Maharashtra, namely Neo Sannyas Foundation and Osho International Foundation.

The case is back to square one.

Ma Sadhana and her friends have even indicated that they will reach out to Prime Minister Narendra Modi and Maharashtra Chief Minister Uddhav Thackeray to escalate the matter. In short, a place made by Osho devotees should stay with Osho devotees. Ma Sadhana and her friends have admitted that the commune has a cash deficit of Rs 3.37 crore [half million $] (2021-22).

But taking it to politicians would not be the best answer, claim those who once spent time at the commune. “Osho’s thoughts are buried in oblivion. See what they have done to the commune. His spiritual genius is hardly followed now. This is total destruction of his thoughts,” says Vinita Deshmukh, columnist and editor, who spent some formative years at the commune.

Osho hated politicians, he wanted to stay away from them, says Deshmukh. When the movement was gaining momentum, the government (then headed by PM Indira Gandhi) hated Osho’s star status and launched investigations into multiple allegations of criminal behaviour.

The government levelled charges related to Osho-sanctioned prostitution, international drug trafficking, gold smuggling, money-laundering, and tax evasion. Osho paid his taxes and then in 1981, he left for Oregon. “It would be strange if the devotees seek help from the government to survive. It was a new world he created, and it is that very world these people have destroyed,” Deshmukh said in an interview.

It is clear Ma Sadhana has been able to drum up quite a bit of support. A group of Osho disciples from Mumbai and Pune also met Maharashtra Governor Bhagat Singh Koshyari and urged him to stop the sale. But the delegation also told Koshyari the accounts of the commune need a thorough investigation. Some even demanded a probe by the Enforcement Directorate (ED).

The Mumbai Charity Commissioner has called both sides on June 6, 2022, for a crucial hearing. People close to the commune say this could set the tone for the future of the Koregaon Park centre.

Seasoned journalist and author Abhay Vaidya, who wrote the book Who Killed Osho, says the commune has fallen on bad days. “They were always secretive about their work, and now they are openly bickering,” said Vaidya.

Vaidya, whose book revolves around the big question whether or not Osho was murdered, says strange things have always happened in the commune, it has always been shrouded in secrecy. Consider this case: Osho’s girlfriend and caretaker of many years, Ma Prem Nirvano, died under mysterious circumstances a month and half before Osho’s death. It was instantly hushed up. Then Osho died reportedly of heart ailment which was not confirmed by his physician. There was no will left behind by Osho. A fake will raised by some of the devotees was eventually withdrawn. An unresolved case relating to the will is still pending at the Koregaon Police Station.

Now, there are only a handful of devotees at the commune. They sit under huge banyan trees or inside Zen-shaped halls and read books written by the mesmeric godman who advocated sex and spirituality in equal measure. The books are full of sayings of Jean Paul Sartre, Tzu, P.D. Ouspensky, Socrates and Buddha.

The new recruits are in awe of Osho’s magnetism, which is at the heart of the commune’s environment. There are over 400 such publications, video and audio CDs. When he lived at Koregaon, his devotees claimed Osho was the only guru in the world who could dictate a 400-page book every ten days.

Across the world, there are over 200,000 devotees who adopted his unique brand of sannyas.

“The life at the commune now is no patch on what it was when Osho lived. But I would say more and more youngsters are reading about Osho,” says Bijal Machado, a resident of Koregaon Park. “It all started falling apart from 2005 onwards, now it is like a wellness resort,” says Machado.

She once worked in the administration department at the commune under the guidance of Ma Anand Sheela, the spokesperson for Osho in the 80s. Ma Sheela now lives in Switzerland.

It is high noon and Ma Sadhana has stepped out of the commune, the guided tour has ended. She must now return to the home of the voluble spiritualist.

Shantanu Guha Ray is a senior journalist based in New Delhi.

Alert thanks to Osho Viha 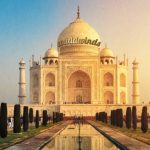 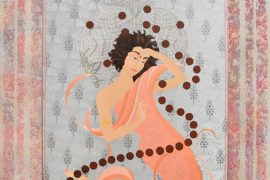 Go beyond rituals to connect with the divine 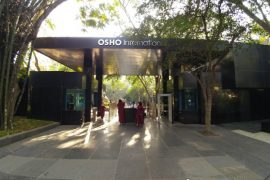 Pune: Shock For Osho Friends And Disciples In India And Around The World 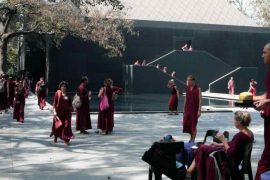