Each moment the last

Osho mentions Aruna’s letter about Vimalkirti’s death. “Be herenow, as if this is the last moment…”

The lotus is a very significant symbol in eastern mysticism. The lotus lives in water, it grows in water, but its petals are so velvety that the water cannot touch them. If you go in the early morning to a lotus pond you will see on the lotus leaves, on the lotus petals, dewdrops shining like pearls in the early morning sun – it is beautiful to see dewdrops on lotus leaves or lotus petals. But the most miraculous thing is that they are on the leaves, on the petals, but they are not touching it. They don’t make it wet. Just a slight breeze and they slip into the lake; and they don’t leave even a trace behind because the leaf or the petals remain totally untouched, absolutely untouched, as if there have been no dewdrops on them. And this is the symbol of a sannyasin.

The lotus has become the very metaphor for sannyas: live in the world but remain untouched by it. I don’t teach escape, I don’t teach renunciation. I am all for life, I am totally for life, because to me life is god and there is no other god than life. All the ideas of god other than life are simply fabrications of the cunning minds, ways to exploit simple-minded human beings.

Life is the only god, so I cannot teach escape from life. One has to live in it and one has to live intensely, passionately, not half-heartedly, not in a lukewarm way. One has to bum one’s lifetorch from both ends together; then even a single moment is more valuable than the whole eternity. A single moment of intense, ecstatic living is far deeper, far higher, than living for one hundred years, but living just so-so, half-heartedly, fragmentarily, unconsciously, somehow dragging from the cradle to the grave, sad, somber, serious, with no dance, with no celebration, with no light in the eyes, with no song in the heart. That is not life; it is simply vegetating.

Millions of people are simply living like cabbages. A few live like cauliflowers: my definition of a cauliflower is a cabbage with a college education – with a Ph.D. or a D.Lit. The same cabbage having a certificate from a university becomes a cauliflower.

But whether one lives like a cabbage or a cauliflower makes no difference. Rarely, a very few people have lived really, authentically, totally – and that’s what I teach: live moment-to-moment, but live without holding anything back. And live like a lotus flower, untouched. Take life as a beautiful game and leam the art of sportsmanship – that’s what sannyas is: do whatsoever you want to do but be a sportsman. Whether you win or not does not matter, whether you succeed or fail is irrelevant. All that matters is that you played well, that you did your best, that you enjoyed while you did it. To me that is the real thing. Failure or success makes no difference.

In my childhood I used to go to see many wrestling competitions. My village was famous for wrestling; there were many good wrestlers in the village. It was one of the most significant things in that village, that it created many great wrestlers, and people used to come from far away to fight with the wrestlers there.

One wrestler I loved. I had seen many wrestling competitions, beautiful fighters, but one man I loved. He was defeated. After his defeat he danced! It was a shock to the crowd that had gathered to see, it was even a shock to the person who had defeated him. In fact the person who was the winner looked like a fool!

I followed that man – he was staying in a small hut by the river. I followed him and I asked him, “That was really beautiful of you, but why did you dance?” He said, “I danced because I had done whatsoever I could; I loved every moment of the fight, I was not holding anything back. I don’t care what happened. The result is not the thing, only the action.”

That man had some insight, some meditative insight.

Only the action, no question of the result – that means living it totally. If you are thinking of the result you are half-hearted already, you are not herenow. Your mind is hovering in the future.

Just the other day I received a letter from one of my sannyasins, Aruna. One night, just a few days before Vimalkirti died, she was at the gate sniffing people for strong perfume smells and she sniffed Vimalkirti out, because she felt a certain smell of shampoo or something and she said “You will not be able to go to darshan today.” And she writes, “Now I feel so sad. Vimalkirti started trembling, perspiring, as if this was going to be his last darshan. And preventing him looked so ugly to me,” she writes, “that I allowed him, but I told him, ‘You have to sit a little far away.’ He was so ecstatic, so happy.”

Now she remembers that preventing him from only one darshan… and he felt such a shock, a trembling, that recapitulating the whole scene she understands the meaning of it; that for him, it was as if that was the last – who knows whether tomorrow one will be here or not?

This is the way to live! And when you don’t care about the result you become a lotus.

I have chosen the color for my sannyasins: this is the color of the lotus; and the lotus has to be remembered again and again so that you can go on getting deeper and deeper into the now and here – but unattached, unclinging, untouched. No future, so that you can live totally, and no past so that you remain untouched. 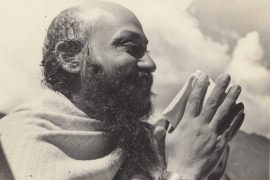