Osho talks about the trinity: mathematics, music and meditation.

Hence my insistence that music and meditation should go together. That adds a new dimension – to both. Both are enriched by it. 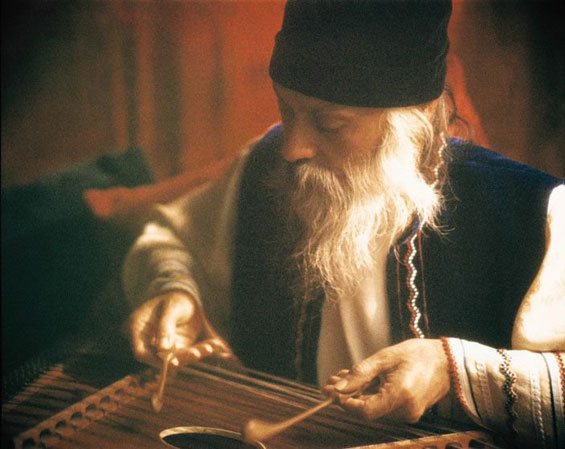 Remember three M’s just as you remember three R’s. The first M is mathematics; mathematics is the purest science. The second M is music; music is pure art. And the third M is meditation; meditation is pure religion. Where all these three meet, you attain the trinity.

My approach is scientific. Even if I make illogical statements, I make them very very logically. Even if I assert paradoxes, they are asserted in a logical way. Whatsoever I am saying has a mathematics behind it, a method, a certain scientific approach. I am not an unscientific person. My science serves my religion; the science is not the end but it is a beautiful beginning.

And my approach is artistic, aesthetic. I cannot help you unless this energy field becomes musical. Music is pure art. And if it is joined with mathematics, it becomes a tremendously powerful instrument to penetrate into your interiority. Of course, it will not be complete unless meditation is the highest peak, the purest religion.

And we are trying to create the ultimate synthesis. This is my trinity: mathematics, music, meditation. This is my trimurti – three faces of God. You can attain to God through one face, but then your experience of God will not be so rich as it will be when you attain two faces. But it will still lack something unless you attain all the three faces. When you know God as a trinity, when you have come through all the three dimensions, your experience, your nirvana, your enlightenment, will be the richest.

Buddha insists on meditation alone; that is one face of God. Mohammed insists on prayer, music, singing; hence the Koran has the quality of music in it. No other scripture has so much music in it as the Koran. The very word koran simply means “Recite! Sing!” That was the first revelation to Mohammed. Something from the beyond called forth and said, “Recite! Recite! Sing!”

Islam is another face of God. And there are religions which have approached God through the third M: mathematics. Jainism is the purest representative of the third approach. Mahavira speaks like Albert Einstein. It is not an accident that Mahavira was the first person in human history to talk about the theory of relativity. After twenty-five centuries, Albert Einstein was able to prove it scientifically, but Mahavira saw it in his vision.

My religion
has to be a
religion of dance,
love, laughter.

I started these Buddha lectures with a ten-day silence deliberately. It was a device to start with silence – Buddha would have been very happy. He must have shrugged his shoulders a little bit because of the music, but what can I do? It can’t be helped.

The Absence of Time

Out of the Frame

The law of karma applies only to the unconscious being

It was a fight between death and your love