Folks living in North and South America will be able to see the supermoon in the night of September 27th, and those residing in Europe, Africa and sections of Central Asia can see it on September 28th in the morning (if you get up early enough). Most of those dwelling in the Asia Pacific regions lucked out this time around and they’ll have to wait for another 20 years for the next one.

As this NASA video below explains, a supermoon is a full moon that appears to be about 14 cm larger than usual because it is at its closest point in its elliptical orbit.

According to Christian Fundamentalists, the four blood moons are very significant and according to them this fourth appearance will break a ‘Sixth Seal of Revelation’ (that’s out of seven total). Also, there have been incessant whispers on various websites of some “crisis to come,” and the global economy was mentioned several times.

People are immensely intrigued by this ominous event and John Hogue’s (Dhyan Arjuna’s) book, Predictions for the Last Blood Moon, instantly climbed to Number One bestseller at Amazon for the Prophecy category after its release on July 31, 2015.

Unique to this book is also his introduction of astrological and non-Christian parallel visions that often prefigure clearer and more accurately timed signs of history-altering changes.

Hogue has explained that he attempted to bring in some clarity about this very hyped-up prophecy although it does have significant elements of revelation worth exploring. What is needed is to push the pause button on Christian fundamentalist expectations and free the interpretations about Blood Moon prophecy from religiously dogmatic myopia and “propheganda.”

The Very Awareness of Beingness

Radiance of the ultimate peak of consciousness 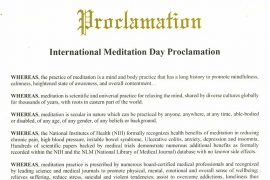