Turmoil and unrest call for new ways and means. However, accept that there always remains something imperfect or incomplete, says Sitara. 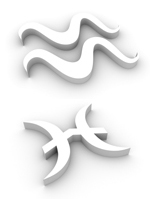 Mood of the Moment

Turmoil and unrest spill over from January into February and call for new ways and means. Whatever one can ride out is best to move to the period after the New Moon, when gradually a new equilibrium settles in. Pragmatism and compassion gain in importance and the radical nature of Mars in Scorpio is toned down. The sign change of Mercury and Venus into Aquarius brings hope that now original and pioneering solutions can be found. Saturn provides a solid foundation and Jupiter in Virgo supports benevolently. However, Chiron urges to accept that not all problems can be solved and not all difficulties be cleared away. No matter how hard you try, there always remains something imperfect or incomplete to be accepted calmly.

With the Sun-Neptune conjunction end of the month much can ease off. Nevertheless it matters to stay alert, because with Neptune things are sometimes too good to be true. For all spiritual matters the time until the second third of March is ideal.

Aries: The month begins with considerable tension, but also with a high potential for pioneering actions or ideas. To realize this potential becomes easier over time – rather than be misled by one’s own impatience or passion to premature action. Most Aries have already experienced – but not necessarily learned – that rapid implementation of one’s own impulses is not a panacea. Mars in Scorpio helps you in February to tackle all matters deliberately and goal-directed.

Taurus: In early February you could unexpectedly get into stormy weather. Intense emotions and harrowing situations make you experience aspects of yourself that so far have been foreign to you. Although you’ll soon get into calmer waters, it is important to know about the multifaceted dimensions hidden within you. Enjoy your own peace of mind even more and act out of the realization that the entire range of thoughts and feelings are available to you, should they be required for any situation in life.

Gemini: February starts with a rather irritated climate, but quickly winds down and opens up to plenty of new opportunities for you. In the second half of the month, the mood lifts even more, and with Mercury in Aquarius you can juggle jointly in competition. Life is a lucky bag and full of delightful surprises! Have a crack at yourself, explore, analyze, discover all things practical, theoretical and whatever else is being offered in-between. Embark on the quest for the new and not-yet-decrypted!

Cancer: Hot passion and cool composure are now close to one another and are not always getting along too well. Both have something – take the best of each! The willingness to employ yourself fully and on the other hand the ability to remain true to yourself and not jump on every bandwagon are both beneficial for you. The trick is to identify what should be activated when. In the last third of the month moderating and expansive forces will help equally for you to find a healthy balance.

Leo: A dynamic first half of the month – around the New Moon pay attention that no explosive derailments happen. Stay on the move, but playfully and with a view of the big picture. Your own motives and goals are naturally closest to you, but that does not necessarily mean that this is so for everyone else too. So strike up some conversations and find out about it, especially between the 10th and the Full Moon. End of the month the veil could lift, and you will find yourself unexpectedly one with the all.

Virgo: A wonderful February full of inner – and at times also external – expansion. Take up all inspirations that are coming to you now, develop them further and give them shape actively. Writing, talking, studying, learning – all this is now under a particularly lucky star. The opening of the heart happens by itself. You are flowing and in harmony with the very best in you. In the second half of the month there are a few stumbling blocks, but with courage and confidence you’ll overcome such inevitable hurdles well.

Libra: Pluto defines the month’s first steps. It bodes a challenging, intense time during which it is a matter of not being content with lazy compromises – not an easy task for Libras. In your relationships do your best to stick to your experiences with honesty, profundity and steadfastness. You’ll get support and realize that the most varied forms of expression have their place in this world – not just those with which you least offend (especially since despite all efforts that often doesn’t work out!).

Scorpio: Mars further increases your energy and with it you can put a great deal in motion. Also in your love life all is looking well, because Venus finds Mars in your sign very attractive. In the period around the New Moon you might feel as if charged by high power voltage and shouldn’t make too many plans – in particular all innovations are now not quite as easy as it seems at first. Better opportunities are projects that don’t focus on change but rather on a gradual approach in a good direction.

Sagittarius: You’ve gradually adapted to your slower pace. Moreover, since you are no longer fighting with yourself nor judging your inefficiency, you are now making good progress. Your present resources are communication and a friendly connection with others. Also further education – privately or professionally – is conducive. With Saturn in your sign your willingness to steady persistent effort shows up clearly and is cherished and encouraged by others. This in turn gives you a solid basic feeling in life.

Capricorn: A vehement start into the month, prompting you to remain alert and not get involved in the movies that your mind wants to sell you as an iron-cast reality.Take everything that you perceive for what it is: an object of your perception. Quite simply – you, the subject, perceives it. Already from the second week onwards it becomes quieter and you can chill out through the month with an open heart. Relationships and spiritual exchanges are a source of joy and strength. At the end of the month it is increasingly about becoming active.

Aquarius: A turbulent month is ahead of you: the first half of February, as for many, is also for you rather startling and suspenseful. In particular, the emotions are
running high waves. However, as so often it is especially about the emotions of others. Since the turmoil is happening in your world of experience, it is nonetheless you who needs to find a creative way to deal with it. In the second half of February friendly, clear communication is booming, which gives you both roots and wings: unwavering ease!

Pisces: Although Uranus-Pluto causes a lot of unrest again, Pisces maintain their cool; the heart is spot on and your head wraps itself around matters quite well. The full moon might bring a little strain because you believe that you or others do little justice to your ideals. But end of the month you will see that when viewed with a wide angle everything has its own wonderful order. Sheltered in this order, you can play the role that you have to play right now and be at ease.

Sitara became a disciple of Osho’s in 1979. She lives in Germany and has been writing the horoscopes of the German Osho Times since 1998. Passionate about astrology since childhood, she has published several books on the subject. She gives personal sessions, also over phone or Skype, focusing on spiritual development. Moreover, Sitara offers end-of-life care counselling (free of charge). She is currently teaching and writing about traditional advaita vedanta for Western seekers. www.astro-sitara.de