The Hadean Period, the birth pangs of our Planet Earth

Article 17: The name ‘Hadean’ comes from Hades, the underworld of the Greek mythology. It refers to the hellish conditions of the Earth during the earliest part of its history.

The Pre-Cambrian is considered to have three eons: the Hadean, the Archean and the Proterozoic. Some scientists recognize a fourth eon, which they call the Chaotian, which predates the others; it is the chaotic time of the first formation of our solar system.

The Earth and Moon in the Hadean Eon

The name Hadean comes from Hades, the underworld of the Greek mythology. It refers to the hellish conditions of the Earth during the earliest part of its history, when much of the Earth’s surface remained molten. The Hadean is the first period in Earth’s history, but one of which we have little record.

Hadean time, from 4,6 to 4 billion years ago, is not a geological period as such. No rocks on the Earth are this old, except for meteorites.

During Hadean our Solar System is forming, probably within a large cloud of gas and dust around a star, our Sun, called an accretion disc. The relative abundance of heavier elements in the Solar System suggests that this gas and dust is derived from a supernova (or supernovas), the explosion of an old, massive star. Heavier elements are generated within stars by nuclear fusion of hydrogen and are otherwise uncommon. We can see similar processes taking place today in so-called diffuse nebulae in this and other galaxies, such as the Nebula M16, the Eagle Nebula.

The sun forms within such a cloud of gas and dust, shrinking in on itself by gravitational compaction, until it begins to undergo nuclear fusion and to give off light and heat. Surrounding particles begin to coalesce by gravity into larger lumps or planetesimals, which continue to aggregate into planets. Left-over material does form asteroids and comets. 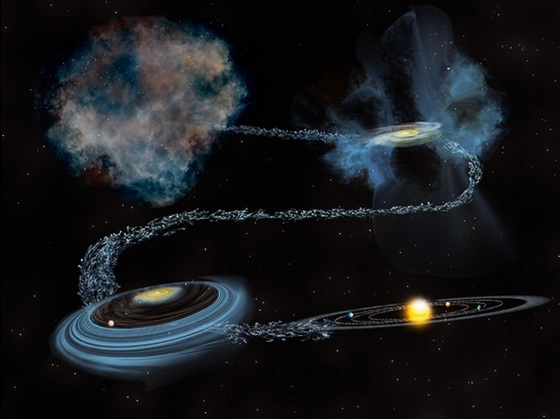 Because collisions between large planetesimals release a lot of heat, the Earth and other planets are likely be molten at the beginning of their histories. Solidification of the molten material into rock happens as the Earth cools down. Astro-geo-physicists theorize that about 4,52 billion years ago the proto-Earth collided with a Mars-size planetoid, named Theia. The collision added about 10 percent to Earth’s mass. Debris from this collision coalesced to form the Earth’s Moon. 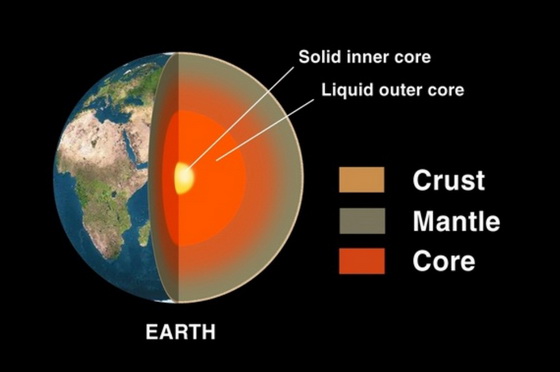 The oldest meteorites and lunar rocks are about 4,5 billion years old, but the oldest Earth rocks currently known are 3,8 billion years old. Sometime during the first 800 million or so years of its history, the surface of the Earth changes from liquid to solid. Once solid rock forms on the Earth, its geological history begins. This most likely happens prior to 3,8 billion years, but hard evidence for this is lacking. Erosion and plate tectonics has probably destroyed all of the solid rocks that were older than 3,8 billion years. The advent of a rock record roughly marks the beginning of the next period, the Archean eon.

Thanks to the University of California, Berkeley, Museum of Paleontology, to the Smithsonian Institution, and to LiveScience.

An Organisation Is Not Needed