The Jurassic Period, a festival for the dinosaurs and for the first birds flying in the skies

Article 27: During the Jurassic Period, the supercontinent Pangea splits apart. The period is a golden age for the large herbivorous dinosaurs. The Jurassic also sees the first birds, including Archaeopteryx.

During the Jurassic Period, the supercontinent Pangaea splits apart. The northern half, known as Laurasia, is splitting into landmasses that will eventually form North America and Eurasia, opening basins for the central Atlantic and the Gulf of Mexico. The southern half, Gondwana, is drifting into an eastern segment that will form Antarctica, Madagascar, India and Australia, and a western portion that will form Africa and South America.

The supercontinent Pangea begins to break apart in the Middle Jurassic. In the Late Jurassic, the Central Atlantic Ocean is a narrow ocean, separating Africa from eastern North America. Eastern Gondwana is separating from Western Gondwana.

The Jurassic geological record is good in Western Europe, where extensive marine sequences indicate a time when much of the continent was submerged under shallow tropical seas. Famous locales include the Jurassic Coast World Heritage Site in southern England and the renowned Late-Jurassic Lagerstätten of Holzmaden and Solnhofen in Germany.

The beautiful Jurassic Coast World Heritage Site spans 95 miles from East Devon to Dorset, and is home to rocks as old as 185 million years. Fossils can even be found on its beaches.

Land plants abound in the Jurassic, but floras are different from what we see today. Although Jurassic dinosaurs are sometimes drawn with palm trees, there are no palms or any other flowering plants — at least as we know them today — in the Jurassic.

By the beginning of the Jurassic, plant life has evolved from Bryophytes, the low-growing mosses and liverworts, that lack vascular tissue and are confined to swampy moist areas. Ferns and gingkoes, complete with roots and vascular tissue to move water and nutrients and a spore system of reproduction, are the dominant plants of the early Jurassic.

Conifers are also present, including close relatives of living redwoods, cypresses and pines. Creeping about in this foliage, no bigger than rats, are a number of early mammals.

During the Jurassic, a new method of plant reproduction evolves. Gymnosperms, cone-bearing plants such as conifers, allow for wind distribution of pollen. This bisexual reproduction allows for greater genetic combination and by the end of the Jurassic, the gymnosperms are widespread. True flowering plants do not evolve until the Cretaceous.

As Steven Spielberg’s 1993 film Jurassic Park asserts, reptiles are the dominant animal life forms during the Jurassic Period. Reptiles have overcome the evolutionary hurdles of support and reproduction that limited the amphibians. Reptiles have strong ossified skeletons, supported by advanced muscular systems for body support and locomotion. Some of the largest animals ever to live are dinosaurs of the Jurassic Period. Reptiles are also capable of laying amniotic eggs, which keeps the developing young moist and nourished during gestation. This allows for the first fully terrestrial animal life cycles.

Great plant-eating dinosaurs roaming the earth, feeding on lush ferns and palm-like cycads and bennettitales; smaller carnivores stalking the great herbivores; oceans full of fish, squid and ammonites plus great ichthyosaurs and long-necked plesiosaurs; vertebrates taking to the air, like the pterosaurs and the first birds: this is the Jurassic Period, named for the Jura Mountains on the border between France and Switzerland, where rocks of this age were first studied.

The Jurassic is a golden age for the large herbivorous dinosaurs, known as the sauropods. They have very long necks, long tails, small heads (relative to the rest of their body) and four thick, pillar-like legs. Such small skulls means that they have very small brains as well. Despite the small brains, this group is very successful during the Jurassic Period and has a wide geographic distribution. Sauropod fossils have been found on every continent, except Antarctica. They are notable for the enormous sizes, attained by some species. Some genera obtain lengths greater than 100 feet and weights over 100 tons, making them the largest land animals ever to walk on the Earth.

Brachiosaurus, the iconic sauropod dinosaur from the Jurassic period 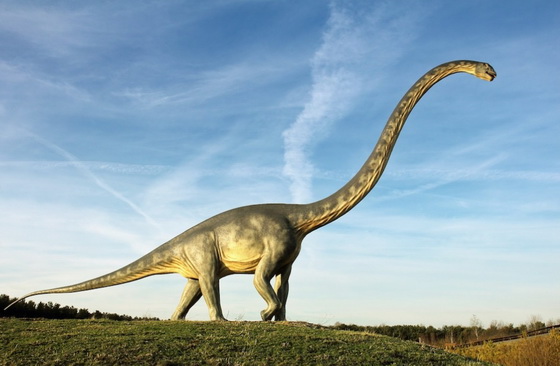 Diplodocus, living in the mountainous regions of North America

Well-known genera include Brachiosaurus, Diplodocus, Apatosaurus and Brontosaurus. Other well known dinosaurs of the Jurassic include the plated Stegosaurus and the flying Pterosaurs.

Allosaurus is one of the most common Carnosaurs in North America; numerous intact skeletons have been found in the fossil beds of Utah.

It is unlikely to have been common for an Allosaurus to take on a healthy large adult herbivore like a Brachiosaurus, or even a Stegosaurus. They were likely opportunistic, consuming young, sick, aged or injured prey. They were probably able to grasp such prey with their heavily muscled forelimbs, tearing it to pieces with large claws and then swallowing the pieces whole.

Dinosaurs may have been the dominant land animals, but they are not alone. Early mammals are mostly very small herbivores or insectivores and are not in competition with the larger reptiles.

Marine life of the Jurassic Period is also highly diversified. The largest marine carnivores are the Plesiosaurs. These carnivorous marine reptiles typically have broad bodies and long necks with four flipper-shaped limbs.

Ichthyosaurus is a more fish-shaped reptile that is most common in the early Jurassic.

The Jurassic has become a household word with the success of the movie Jurassic Park. Outside of Hollywood, the Jurassic is still important to us today, both because of its wealth of fossils and because of its economic importance. The oilfields of the North Sea, for instance, are Jurassic in age.

The Jurassic also sees the origination of the first birds, including the well- known Archaeopteryx. The first Archaeopteryx (“ancient wing”) fossil to be discovered was a single feather, found in the Solnhofen Limestone Formation of Bavaria in 1860, during quarrying operations. Since then seven skeletons have been found, the most complete of which are the British Museum specimen (discovered in 1862) and the Berlin specimen (discovered in 1877).

Thanks to the University of California, Berkeley, Museum of Paleontology, to Christopher R. Scotese, and to LiveScience

Another Series of Dilemmas

Socrates is offered alternatives to save himself from being poisoned