Article 31: On land, mammals begin to dominate in this period, except in Australia. They continue to grow larger and larger, in good harmony with the expansion of grasslands and prairies.

The Oligocene Period of the Earth’s history lasts 11 million years, beginning 34 and ending 23 million years ago.

Although it lasts only a “short” 11 million years, a number of major changes occur during this time. These changes include the appearance of the first elephants with trunks, early horses and the appearance of evergreen trees and of many grasses — plants that will produce extensive grasslands in the following epoch, the Miocene.

A landscape about 32 million years ago, in what is now the northern Great Plains at Badlands National Park, South Dakota. The forest, primarily mixed deciduous trees and conifers, is confined to the vicinity of the stream and nearby floodplain. A group of early horses is being stalked by Hoplophoneus, a saber-toothed nimravid carnivore. Credit to AMNH.

As a result of the cooling trend prevalent throughout the Oligocene Epoch, the lives and habitats of many organisms are directly affected. In the oceans, marine biotic provinces become more fragmented. The cooling trend is also responsible for the reduced diversity in marine plankton, the foundation of the food chain.

On land, mammals such as horses, deer, camels, elephants, cats, dogs and primates begin to dominate, except in Australia. Mammals still continue to grow larger and larger. The continuation of land mammal and faunal migration between Asia and North America is responsible for the dispersion of several lineages to new continents. Diurnal raptors such as falcons, eagles and hawks, along with seven to ten families of rodents, also first appear during the Oligocene. The bulk feeding in the open grasslands and savannas that occurs in this period, results in the increase of general herbivore size. As an example, ungulates continue to get larger throughout the Oligocene.

An extract from Rudolph F. Zallinger’s mural ‘The Age of Mammals’, showing reconstructions of Oligocene mammals. From left to right these are the creodont Hyaenodon; the saber-toothed nimravid Hoplophoneus; the horse Mesohippus; Subhyracodon, a hornless rhino; Protapirus, an early tapir; the primitive camel Poebrotherium and the anthracotherid artiodactyl Bothriodon. Credit to Yale University

The early Oligocene is marked by a multitude of different events, ranging from the appearance of new groups, such as elephants, to the decline in taxonomic diversity in middle- and high-latitude forests.

The mid-Oligocene is marked by a worldwide marine regression; this includes a decline in the total number of marine species.

On land, the first of the open grassland faunas appear in Mongolia.

The late Oligocene is marked by the expansion of grasslands and prairies, that are intimately linked to the expansion of grazing animals. Horses experience a period of diversification. Primitive beavers appear and the earliest of the New World monkeys inhabit South America.

During this period, the continents continue to drift toward their present positions. Antarctica becomes more isolated and finally develops an ice cap. Mountain building in western North America continues and the Alps start to rise in Europe, as the African plate continues to push north into the Eurasian plate, isolating the remnants of the Tethys Sea. There appears to have been a land bridge in the early Oligocene between North America and Europe, since the faunas of the two regions are very similar.

The Antarctic Circumpolar Current is the only place on earth where ocean water can circulate around the globe without running into landmasses. The current flows from west to east for more than 12.400 miles around Antarctica, making it the largest current in the world.

Sometime during the Oligocene, South America is finally detached from Antarctica and drifts north towards North America. It allows the Antarctic Circumpolar Current to flow, rapidly cooling the Antarctic continent.

Thanks to the University of California, Berkeley, Museum of Paleontology

You’re a Fountain of Love 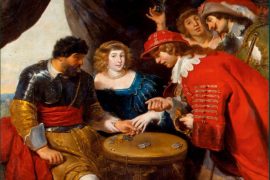 An emperor calls his son back to the palace