Manish Vyas (who has performed with Snatam Kaur, Deva Premal and Miten and Prem Joshua) has an affectionate yet powerful voice, revealed via outstanding compositions joined by the sensuality of a fine combination of Indian instruments. The assortments of colors from Manish’s musical palette reflect this celebration of love, traversing the entire range of emotions: mystical, mournful, celebratory, and full of longing. On seven tracks, Manish’s soaring sensual voice is framed by traditional Indian instruments such as Bansuri, Santoor, Saarangi, Dholak and Tabla, as well as by Violin, Keyboards, Bass, Drums, Electric Piano and subtle programming (by Chintan Relenberg). Spiritual choral background vocals contribute to the lush soundscape. Manish successfully blends the elements of Indian pop and folk music, Qawwali (a form of sufi devotional music) and Ghazal poetry as he reimagines facets of India’s spiritual heart. These songs are mantras and mystical poems put to music.

Manish Vyas’s musical talents put him at a forefront of a new generation of artists who have experienced an abiding and intimate connection with both their guru and the modern world. His own solo works pushes the boundaries beyond the mantra and new age genres and into the broader realm of world music. His music ranges far and wide – from the pulsing beats of dance floor to music for relaxation and soaring imagination. But it always reflects his spiritual and musical roots.

More reviews and tracks by the same musician on Osho News 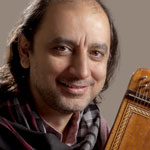 Manish Vyas grew up in a sannyas family in Gujarat, India, and was initiated into sannyas in 1978, when he was just 7. In 1986, Manish moved to Pune originally to study engineering, but instead became involved in the music department of Osho’s Commune. He played live for Osho together with musicians from all over the world. This period helped his musical horizon expand. Manish has since performed, recorded and travelled with Prem Joshua, Chinmaya, Snatam Kaur, Shastro, Praful, Sudha, Maneesh and many other musicians. He has also composed mantras for Deva Premal. manishvyas.com

My Day of Ashes