Lakshen and director-producer Subhash Ghai will present the film project at a press conference during the current Cannes Film Festival – and it is already a hot topic in the media. (Update: the new working title is ‘Osho: The Other Side of the Ocean’)

The film will be presented under the working title ‘Osho, Lord of the Full Moon’ at a press conference during the Cannes Festival in France on Tuesday, 15th May 2018, 4pm.

In the wake of the media attention Osho has received after the screening of the Netflix docuseries ‘Wild Wild Country’, which Osho News has extensively reported about in recent weeks, this might be indeed the right moment when Lakshen’s project, which has been brewing in his pot for quite some time, is being picked up. We spoke about his project already in an interview Lakshen gave to Osho News in 2010 (Beyond the Goal – and the Projections), when the film still had the working title, ‘Osho the Movie’.

While ‘Wild Wild Country’ focused on the period in which Osho created his community in Oregon that became very controversial, Lakshen’s film will show not only that part but the entire perspective of Osho’s work and explore the pieces that the Netflix series had missed.

The idea for this film was inspired by movies such as ‘Witness’ by P. Weir; S. Lumet’s ‘A Stranger Among Us’ and Bertolucci’s ‘Little Buddha’. The parallels with these titles are that the action-thriller genre is combined with a journey inside unconventional communities, such as the Amish for ‘Witness’ and the Hasidic Jews for ‘A Stranger Among Us’. Furthermore, as in ‘Little Buddha’, a book will be used as a device to re-live – through a series of flashbacks – Osho’s spiritual realization.

The story unfolds on two levels; through action – often dramatic – portraying the ups and downs of events around the master in different parts of the world, and through the more mystical and poetic flashbacks set in Kipling’s India in transition from British domination to independence.

Besides Osho, “The most dangerous man after Jesus Christ,” as the American author Tom Robbins called him, the other main character of the film will be Clara, a TV journalist who puts her career at stake trying to discover if the guru is a conman, or an enlightened genius. Answering this question will change the journalist’s life forever!

Update, May 17: The working title was been changed just before the presentation to ‘Osho: The Other Side of the Ocean’

Update, May 18 (amended): Lakshen informed us that the consultant scriptwriter, Kamlesh Pandey, used to attend as a sannyasin the meditation camps in Mt Abu.

More information about the film and contributors can be found in the press kit (PDF).

More on this film project on Osho News 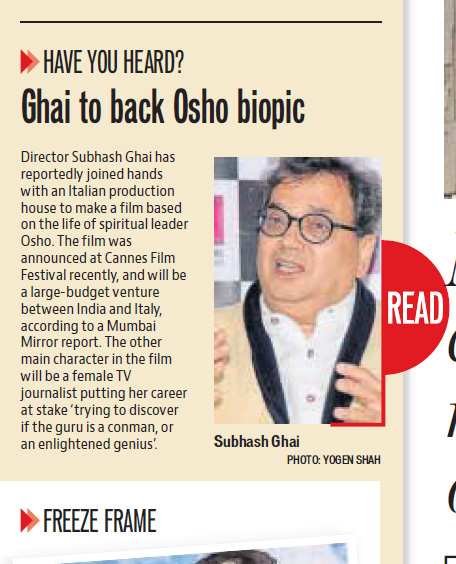 Media coverage of the announcement

Bollywood Hungama, May 15, 2018: After Wild Wild Country, another biopic on Osho and it will be backed by showman Subhash Ghai