Where to Meditate in France?

Shantidharm and Khirad tell Punya the story of how their web portal meditationfrance.com came into being

I first came across the web portal meditationfrance.com when one of my clients, who was giving workshops in France, had an announcement and an article published there. I was amazed at the bulk of information on the subjects of spirituality, ranging from meditation to Tantra, Yoga to Zen, Buddhism to Reiki, massage to spiritual travels. It also has a calendar of activities that display workshops, events and groups in France and in French-speaking countries.

Later I was pleasantly surprised to find out that it is run by sannyasins and that one of them is an old musician friend: Shantidharm who has, in the meantime, also become a webdesigner like me. “How did it all begin?” I asked. 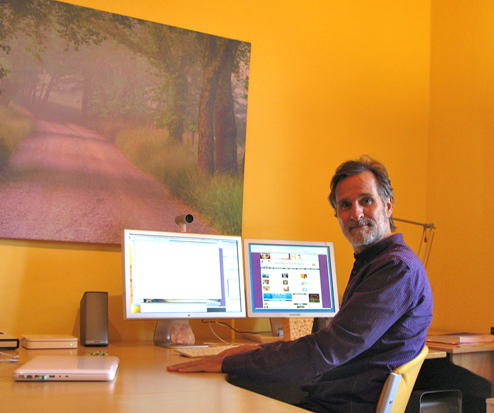 When Shantidharm was working in Pune as a web designer for the osho.com website, he met Khirad who was working for Osho International. This was in the year 2000. They clicked immediately and before he left Pune that year they decided to create a website on meditation for the French community and bought the name: meditationfrance.com.

Once settled, Khirad in France and Shantidharm back in Tuscany, they started working on the website, with Khirad providing the texts and photos and Shanti doing the web design and the coding. As a natural networker Khirad made the website known in the world of Osho quite quickly and received much support from many friends, which also came in the form of them buying advertising space on the website.

“The idea, in the beginning, was to publish information about Osho’s meditations and Tantra, but after 3 years there was a key moment where we decided to embark in a new direction: we would no longer focus solely on Osho’s work but open up to spirituality in general. This allowed us to create sections like Yoga, Buddhism, Zen, spiritual teachers, therapy, alternative medicine, music and books. This gave a whole new dimension to the site and we enjoyed the contact with a lot of different people. It worked beautifully. After 6 years we could finally reap some profit from our efforts.

“A few years later we started publishing articles written by our clients and by ourselves. This turned our information site into a proper web magazine for the French public interested in spirituality and it is now the most important spiritual online magazine in French, with an average of 80.000 visitors per year. We also created specific advertising formulas for therapists, centers, meditation leaders, bookshops, editors and musicians.”

Despite the fact that Khirad eventually went to live in Israel, which meant that none of them where actually living in France, the connection to their home country and to their customers was kept alive via emails, Skype and phone, but occasionally they went to France, in person. Since a few years they have Anutosha as their correspondent in Paris. She goes to meetings, concerts and events to make contacts and to represent meditationfrance.com. They also have Yasmine in the south of France who does the same for them. But much has happened thanks to their partners Deepa and Sitara, who have contributed in their own way to the success of project.

“The website is in French but our team speaks fluent English, so if you need any information regarding meditation, personal growth, spiritual centers, wellbeing, therapy, festivals, alternative health care in France or in the French speaking countries, do not hesitate to contact us,” they confirm.

In April 2010 they took over Radio Magico, a web radio given to them as a present by Omkar, a German sannyasin with a music studio in Hamburg (see right column of this page). They changed the music content and even added Osho meditations. It was an instant success and still is today.”

And the projects keep on coming: In June 2012 they will organize Festi’Spirit, the first big-scale spiritual festival in France. It will be a meeting and sharing of the many healers and therapists who have been with meditationfrance.com; three days of meditation and celebration, conferences, workshops, meditations and concerts. Watch this space to know more or visit their website!

Pope Sued for Crimes Against Humanity

Ask Bhagwan app: Use it, love it. Guaranteed!