The Tribal People of Gujarat

This year, Premgit and Sandhya traveled to Gujarat in India; we show a collection of spectacular black-and-white photos developed by hand. 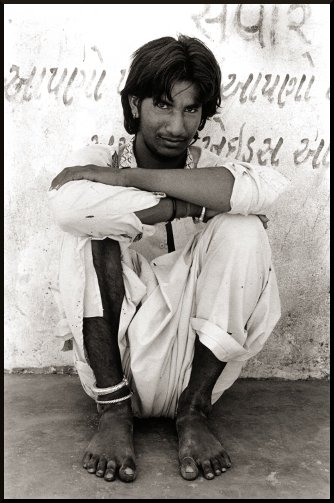 In 2010 I met a family of Rabari tribes-people who were on a pilgrimage in Madhya Pradesh. They piqued my photographic interest, so this year I travelled with Sandhya to Kutch in Gujarat, where they are famous for their nomadic lifestyle, herding goats across the desert.

I soon discovered they did not like to be photographed, so turned my attention to other tribes. The Jats and Garasia, in some villages, literally formed an orderly queue to stand in front of my lens!

Not wanting to give up on the Rabaris altogether, I moved further north and found a very different response. These are a very proud and traditional people, but as in almost all of the tribal people I have visited around India and South East Asia, the younger generation have moved into the 21st century, adopting jeans, t-shirts and trainers in favour of the traditional clothes worn by the elders.

In general the Gujarati people I encountered were the most hospitable and welcoming of anywhere in India. This may have something to do with the lack of Westerners; in a couple of towns I even stopped traffic, the sight of me was so unusual!

In Junagadh, the Maha Shivratri celebration was one of the best I have been to. I even climbed the 10,000 steps up Mount Girnar with thousands of joyful pilgrims, having my picture taken, for a change, by the democratic camera phone.

See more of his Tribal and Sadhu Portraits
Read Veena’s Portrait: Premgit – Intrepid Traveller and Master Photographer
Review of Premgit’s book India – In Through the Outdoor
Dates of his shows in the UK
Website: premgit.co.uk

Crawling Out of the Tantric Muck