Gurdjieff – One of the Most Misunderstood Men in the World

His disciples got scattered. He himself had to escape out of Russia because the communists, who were coming into power, were materialists: they did not believe in any spiritual growth. They conceived of man just as a vegetable.

But Gurdjieff managed to take with him a small group of disciples who had developed and crystallized very much. His wife happened to be one of them. They remained in Constantinople waiting for some opportunity to settle somewhere. It was in Constantinople that they were found by Bennett and brought to Europe.

First he wanted to settle in England, but it seems no country – because of its politicians’ mediocre minds – wants any giant to settle there. They cannot accept anybody who knows more, who is more; and Gurdjieff was a very strong, powerful, charismatic man – whoever came into contact with him was changed. England refused. Country after country refused him.

It was just by chance that the prime minister of France had read a few of his books and was immensely impressed. He invited him, and gave him a beautiful place near Paris, a few miles away, where he established his commune.

In that commune there were two sections. One was the old-guard Russians who had come with him, who were far more developed than the new followers from the West – particularly from America. The difficulty was double.

He was a difficult man,
and very irrational
in his methods.

First, the Russian group knew only Russian, so communication was impossible. Second, they were highly developed, and these new people were highly educated but spiritually not developed at all. Those Russians were not very educated. So there was another barrier of communication – intellectually they could not communicate, language prevented it, education prevented it, and on the plane of being also, communication was difficult because the Russian group was far more developed – Gurdjieff had been working for years with them.

The oldest disciple was his own wife. And it became troublesome to people, particularly the new group: “Why should Gurdjieff be so interested in his own wife?” It was not a question of being his wife; that was irrelevant. The question was that he had worked on the woman the most, and she was dying. And it was only a question of a few days – if he could manage to keep her alive her crystallization will happen. Otherwise one knows not into how many circles of birth and death she would have to move.

Gurdjieff was not trying to sacrifice anybody, but everybody could contribute a little bit of energy to his wife. And it was only a question of a few more days of good health, so she can continue the work. She had almost reached, just a step more and she would not be coming back.

But the Western group could not understand why he was so interested: a man who is enlightened should look equally towards everybody – whether one is his wife or not. But they were ignorant of the fact that he was not looking after his wife, he was looking after a human being who happened to be his wife, but who was in such a position that just a few days’ health would release her forever from every imprisonment. It was worth doing. And he managed it – his wife died enlightened.

This is possible in a school. If we see that somebody has developed so much that there is no harm if everybody else contributes a little energy… so that the person can continue more in the body and come to fulfillment. Alone it is not possible: it is not the way of the monk, it is the way of a mystery school.

And Gurdjieff himself had learned all his techniques, all his experiences, in Sufi schools. He was never a monk; that’s why no religious recognition has been given to him. And Sufi schools keep their techniques very secret. Gurdjieff was the first to bring them to light in the Western world.

Sufis were not happy, and the Western world was shocked because they were used to thinking of religion in a totally different way: “What he is talking about does not seem to be religion. He’s talking almost as if it is a science” – and he was right, it is a science.

Just because of religious persecution, many mystery schools have kept themselves underground and have worked without anybody’s knowledge. Even if the husband is part of a mystery school, his wife does not know about it – because the church, the orthodox religion, will immediately start persecuting him. So it is better to keep silent, and do what you want to do in a secret way.

Gurdjieff’s intention was to make all those secrets available to a wider number of people – in which he failed, not because of himself but because of the masses. They are deaf; they cannot listen to anything that is so new and goes against their well-trodden path.

[…] So Gurdjieff was suspected…. “Is he enlightened or not? He’s trying to keep his wife alive longer; an enlightened man is supposed to be detached – whether one dies or lives does not matter.”

But they don’t understand that he is functioning under a totally different system, and to him it is not a question of his wife; to him it is a question of a growing soul which is just on the border of entering into the whole. If those few days are missed, one cannot say how many more lives she will have to suffer, and whether she will be able to get a master like Gurdjieff – which is difficult.

So if you understand it without prejudice then things are very clear, but if you have already a prejudice – because it was not only his wife, he tried the same with other disciples. Then again too the problem arose, because all those disciples whom he tried, at their deathbed, to help live a little longer happened to be Russians; because they were the most developed, he had worked on them.

Now that too was thought by the Westerners to be discrimination. How reason can create almost valid-looking arguments, “He has never done that with any Westerner; but about the Russians he has a different attitude because he himself is a Russian.”

…you cannot
conceive a better
man than him.

Now this is nonsense, that a man of the qualities of Gurdjieff should make a discrimination. But certainly if the man is developed – and those Russians continued to develop better than the Westerners for the simple reason that they were confined to the campus; their language would not allow them to go out. And they had known Gurdjieff for a long time and had understood the man in deeper ways.

The Westerners came like a fashion. To be with Gurdjieff was fashionable; they came, and after a few days they left him – because to be with him was not an easy job. He was a difficult man, and very irrational in his methods; but his methods are very valid under his system.

So your logic may think that it is absolutely wrong. For example, to Bennett he said, “Today you dig a trench twenty feet long, four feet deep, two feet wide, non-stop.” – not even a coffee break, no food – “You cannot go anywhere, not even to the toilet. You have to dig the ditch non-stop.”

So he tried hard: “The quicker it is done the better, so I am freed.” By the evening it was complete. Gurdjieff came and he said, “Good. Now fill it up exactly the same as it was before you started digging. Then you will be free.”

But Bennett remained with him a long time, and understood a little bit later on what he was doing – because he felt it himself. When he came to a point digging the ditch where he felt so tired that it seemed he would fall down, suddenly at that very moment there was a great rush of energy, a fresh energy became available. And he was surprised – from where? He had not even taken his tea. And with this fresh energy he started digging again.

By the evening he was exhausted, was again on the verge of falling down, and then a second release within his own being – the strongest that he had ever felt in his whole life. But unless you listen to his inner experience, the exercise seems to be absolutely absurd. No sane person is going to remain around Gurdjieff if he has to do such a thing.

Only later on when Bennett was lying down in his bed – he could not sleep the whole night because the second release of energy was so much that it kept him awake, it wanted to do something – he said, “This is absolute madness. The whole day I have been doing. I have never done such work. I am a writer, not a grave digger.”

Next day he asked Gurdjieff. He said, “That’s what I wanted you to understand, that there are layers of energy in you. The first layer is the routine daily work. It is enough for your routine daily work. If you go beyond it, you will come to a point where you will feel exhausted, almost feeling that you will die if you continue; but that is the point to continue, because only then will the second layer start functioning.

“It functions only when you are stubborn enough to provoke it, to challenge it to function. That is your emergency layer. You are tired and you are going to sleep and your house catches fire, and suddenly all tiredness is gone and the whole night you are putting the fire out, and you don’t feel tired at all. The emergency layer has taken over.

“And the third layer is the cosmic layer, which is inexhaustible; once you have touched it, you know it, and you can reach it. Then you can work miracles – which will look like miracles to others, but not to you because you know that you have these possible layers.”
Almost everybody dies working in the first layer.

So Gurdjieff has a system of his own which is not of the routine, traditional religions – they don’t have anything. And he should not be judged by other peoples’ criteria; he should be judged by his own criteria. So first try to understand his system and then judge – if you are bent upon judging.

He was one of the most misunderstood men in the world, for the simple reason that everybody was judging according to his prejudiced mind, and here was a man who was trying to bring a secret doctrine into the open for the first time; but he could not succeed.

He failed utterly, not because of himself – you cannot conceive a better man than him.

But the thick skulls of the mediocre men who inhabit the earth are really too thick. 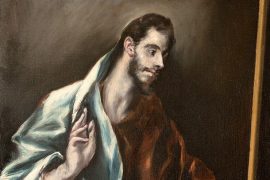 Shivapuri Baba and Thomas the Apostle