Article 34: The Pleistocene is characterized by the presence of large land mammals, like mammoths and mastodons. This period also sees the evolution and expansion of our own species, Homo sapiens.

Pleistocene biota are extremely close to modern ones. Many genera and even species of Pleistocene conifers, mosses, flowering plants, insects, mollusks, birds, mammals and others survive to this day.

Yet the Pleistocene is also characterized by the presence of distinctive large land mammals and birds. Mammoths and their cousins the mastodons, long-horned bisons, saber-toothed cats, giant ground sloths and many other large mammals characterize Pleistocene habitats in North America, Asia and Europe.

The mammoth is one of the largest land mammals of the Pleistocene.

Native horses and camels gallop across the plains of North America. Great Teratorn birds, giant vultures with 25-foot wingspans, stalk prey. Around the end of the Pleistocene, all these creatures go extinct.

The horses living in North America today are all descendants of animals brought from Europe in historic times.

Saber-toothed cats might be most famous for their oversized fangs, but scientists now find the feisty felines had another exceptional feature — powerful arms, stronger than those of any cat alive today.

Commonly known as the saber-toothed tiger, the extinct cat Smilodon fatalis roamed the Americas until roughly 10.000 years ago, preying on megafauna, large animals such as mammoths, bisons, camels and mastodons. Their specialization on such giant creatures might have doomed these hunters, when their Ice Age prey died off.

The most recognizable features of the saber-toothed cat — giant, dagger-like canines — were also perhaps its most puzzling. The fangs would have been excellent at inflicting deadly slashing bites to its prey’s throat, but their size and shape would also have made them highly vulnerable to fracturing, compared with modern cats. That led researchers to wonder how the fangs developed in the first place.

“Cats living today have canines that are round in cross-section, so they can withstand forces in all directions,” said researcher Julie Meachen-Samuels, a paleontologist at the National Evolutionary Synthesis Center in Durham, N.C. “If the prey is struggling, it doesn’t matter which way it’s pulling — their teeth are unlikely to break.”

In contrast, the long canines of saber-toothed cats were oval in cross-section, or thinner side-to-side, making them relatively fragile. This suggested that saber-toothed cats must have killed prey differently from other cats. In fact, research published in 2007 suggested Smilodon had a wimpy bite.

That’s where the powerful arms come in. These predators might have pinned victims down with their heavily muscled forelimbs, to protect their teeth from fracturing as they bit struggling prey, Meachen-Samuels said.

The Pleistocene also sees the evolution and expansion of our own species, Homo sapiens. By the close of the Pleistocene, humans are spread through most of the world. About 13.000 years ago, more than three-fourths of the large Ice Age animals, including woolly mammoths, mastodons, saber-toothed tigers and giant bears, die out. According to a controversial theory, first proposed in the 1960s, human hunting around the close of the Pleistocene causes or contributes to the extinction of many of the Pleistocene large mammals. It is true that the extinction of large animals on different continents appears to correlate with the arrival of humans, but questions remain as to whether early human hunters are sufficiently numerous and technologically advanced to wipe out whole species. It is also been hypothesized that some disease wiped out species after species in the Pleistocene.

Humans have long been blamed for hunting the American mastodon, an ancient relative of the elephant, to extinction. But new radiocarbon dating of North American fossils suggests that the animals became extinct before humans colonized the region. These new findings, published in the Journal Proceedings of the National Academy of Sciences, indicate that mastodons suffered local extinction several tens of millennia before human colonization, the earliest estimate of which is between 13.000 and 14.000 years ago. The issue remains unsolved; perhaps the real cause of the Pleistocene extinction is a combination of all these factors.

Thousands in Four Shades of Blue 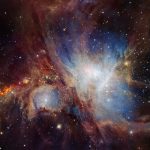 Inside the Heart of the Orion Nebula