Surendra looks at radiation poisoning unleashed onto humanity and ponders the end of Kali Yuga and Osho’s vision of a possible buddhahood outcome. Part 2 of 2 of his essay, ‘Radiation and the Nuclear Nightmare’.

In 2012 cancer was the second biggest cause of death worldwide. In that year, 29% of all deaths in the UK were attributed to cancer. The main cause of death in the world was listed as cardiovascular disease. Now recent research is beginning to suggest a causal association between exposure to low and medium level radiation and increased risk of heart disease.

The dangers do not stop there. For some time, there have been indications that low levels of irradiation of the foetus can affect brain development. It can contribute to impairment of cognitive ability and a dumbing down of entire generations. In addition, radiation is well known as a cause of thyroid cancer, particular in children. There are also suggestions that much lower doses may also have less detectable but harmful effects. The thyroid governs metabolism and, subtly interfering with it, may encourage on the one hand extreme obesity, on the other, hyperactive behaviour.

A substantial increase in radioactive particles in our atmosphere and on the ground came as a result of testing nuclear weapons. According to the Comprehensive Nuclear-Test-Ban Treaty:

“The National Resources Defense Council estimated the total yield of all nuclear tests conducted between 1945 and 1980 at 510 megatons (mt). Atmospheric tests alone accounted for 428 mt, equivalent to over 29,000 Hiroshima-size bombs. Each nuclear test resulted in unrestrained release into the environment of substantial quantities of radioactive materials, which were widely dispersed in the atmosphere and deposited everywhere on the Earth’s surface.”

The meltdown at Chernobyl in 1986 has been estimated to have doubled that amount of radiation. Fukushima in 2011 is reputed to have increased levels sixfold and continues to release its toxins and pose hazards. We can add to these figures the smaller accidents at numerous nuclear plants around the world. These have polluted local drinking water and produce. They also send clouds of radiation into the air to be brought to ground again whenever they encounter rain.

In 1970, the nations with nuclear arsenals and the world’s non-nuclear states, apart from a few, entered into the Nuclear Non-Proliferation Treaty. Those without nuclear weapons agreed not to create any. Those with nuclear weapons agreed to start dismantling theirs. The nuclear nations made some efforts in this direction in the past but are now upgrading their nuclear cache instead. For example, in October 2016, a massive defence deal was brokered between Russia and India. It included a proposal for Russia to build a dozen new nuclear power stations in India over the next 20 years.

A number of the former non-nuclear nations have also gained access to nuclear weapons or hold materials in readiness for making them. Germany and Japan, for example, host US nuclear weapons stored at their military bases. Japan was also reported in 2012 to have “9 tonnes of plutonium in Japan, enough for more than 1,000 nuclear warheads, and an additional 35 tonnes stored in Europe.” (Daniel Horner, Strains Seen in Japan’s Plutonium Policy, Arms Control Association, November 2012)

Former Minister of Defense, Shigeru Ishiba, said in an interview, “I don’t think Japan needs to possess nuclear weapons, but it’s important to maintain our commercial reactors because it would allow us to produce a nuclear warhead in a short amount of time… It’s a tacit nuclear deterrent.” (In Japan, Provocative Case for Staying Nuclear, Chester Dawson, Wall Street Journal, 28 October 2011)

There are even suggestions that Reactor 3 at Fukushima Dai-Ichi was a weapons research facility deliberately detonated after the tsunami to hide its true purpose. Magnox reactors such as this one were specifically designed to produce plutonium for defence programmes alongside electricity. (Yoichi Shimatsu, Secret Weapons Program Inside Fukushima Nuclear Plant? Global Research, April 12, 2011) Alas, Japan is far from being alone. 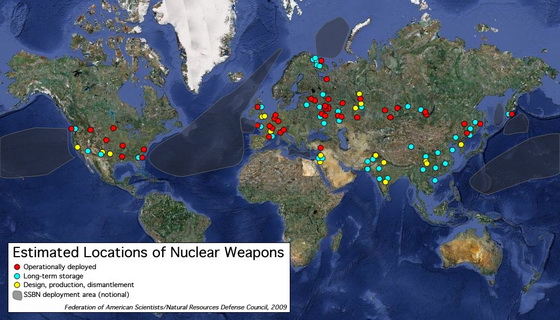 There is also the issue of modern tactical weapons using depleted uranium. What a great way for the nuclear industry to make money from recycling its spent fuel instead of having to store it safely at considerable cost. About thirty percent of DU shells explode on impact releasing a cloud of radioactive dust. This can get into the local water supply and directly into the lungs of anyone, friend or foe, whosoever happens to be around to breathe what is blown on the wind. Apparently, the only weapons of mass destruction to be found in Iraq at the time of the war were the DU shells brought in for use by the US and UK.

And if the earth is one, then there is no need for any nuclear weapons, any war, any armies. All these people, millions of people around the world, are in the armies, in the navy, in the air force wasting their lives. They could be put to production. But that is possible only when nations disappear.

It has been credibly described that in revenge for a price put on his father’s head by Saddam Hussein, Bush junior started the Iraq war. In order to do so, he is reported to have said that another Pearl Harbor was needed to get the public on board. As none was forthcoming, it was created from the inside. Watching footage of the 9/11 destruction, many engineers and pilots attest to the impossibility of such massive damage being caused by the impact of passenger planes, even with the explosions of fuel. An aluminium fuselage demolishing steel girders and concrete? They conclude that only a series of timed detonations with explosives on every floor could have brought down such sturdy constructions as the twin towers. Hard to believe – yes. True? You have to decide for yourself. There is plenty of information out there, for instance: Pilots for 911 Truth.

Perhaps Lincoln was prophetic when he addressed the US nation in Springfield, Illinois on January 27, 1837: “At what point then is the approach of danger to be expected? I answer, if it ever reach us it must spring up amongst us: it cannot come from abroad. If destruction be our lot, we must ourselves be its author and finisher.”

This is all horrendous news. About radiation, however, there is something just as bad – coming from an entirely different source. Our overpopulated world has resulted in global soil depletion. Now fertilisers are essential for sustaining necessary levels of productive farming. The most commonly used are phosphate fertilisers. They come from mines where the phosphates are bound up with naturally occurring uranium. The resulting fertilisers contain substantial traces of radiation in the form of polonium 210, one of the products of uranium decay. This and not nicotine or tar, has been pinpointed as the prime cause of lung cancer in smokers. Polonium 210 is readily taken up by tobacco and most plants in general. That includes food produced with phosphate fertilisers – nearly all the non-organic grains and vegetables on the market. Polonium 210 also accumulates in any livestock given animal feed grown with these fertilisers: thus concentrating in meat, eggs and dairy produce.

BigAgra even had the audacity to market one of the waste products of phosphate fertiliser production with the dubious claim of improving dental health. The chemical used to fluoridate drinking water comes straight from the fertiliser factory with its own traces of radioactive substances.

BigAgra wants to sell its products. Its brother BigPharma – they do have very strong family ties – profits from illness and the sale of costly treatments. Governments may not have the slightest concern about public health. They and other pension agencies, trying to balance the books, must be sighing with relief when our life expectancy is curtailed. In addition to radiation, there are other physical and energetic pollutants that threaten our lives. Yet everything could be overshadowed by the increasing threat of nuclear war.

Who would want that? In a stagnant world economy, high levels of financial growth (above 12%) are still being seen in the weapons industry and all the many peripheral security services that provide hundreds of thousands of jobs, as well as profits for companies and good returns for investors. Lockheed Martin is the main defense contractor worldwide. It has won awards for innovation and receives huge revenues. It has also been repeatedly implicated in federal fraud. But that does not prevent it from continuing to secure the biggest government contracts in the US. Like many financial institutions they seem to have grown bigger than the countries they are supposed to serve. “War may be hell for some but it is heaven for others in a war-dependent economy.” (Big money behind war: the military-industrial complex, Jonathan Turley, Al Jazeera, January 11, 2014)

Unwittingly, these gathering, negative forces may be getting ready to nuke us straight out of the Kali Yuga.

One never knows – any moment you may disappear,
and only a buddha will be left behind.
It is going to happen to everybody
who is earnestly searching it.
It is your nature.
It does not come from outside,
it grows from within, just like a lotus.
It comes from all your ugliness, all your
trivia, mundane affairs, all your anger, greed,
all your rage, all your hate –
just like the lotus comes out of dirty mud,
and dirty water.

But it rises above the dirty mud and dirty water
and it opens its petals only when the sun
comes on the horizon.

There is no other miracle in the world than meditation.
It is the only science of transforming you into a new man,
into a superman.

The superman is needed very much, urgently,
because only the superman can prevent this
beautiful planet from being destroyed by
pygmy politicians, by ugly religions,
by this whole status quo.
All these vested interests are going to destroy
the most beautiful planet in the universe.

You can do only one thing to save it,
and that is to become a buddha
and spread your buddhahood  – share it.

We have to surround the whole globe with buddhas.

They are our only hope.

But I am not hoping in vain, you are going to be my witnesses.

Osho, Christianity: The Deadliest Poison and Zen: The Antidote to All Poisons, Ch 8

A former Reichian therapist, British Surendra took sannyas in 1976. He lived in Osho’s communes in India, USA, UK and Japan from the early 1980s on. In Pune 2 he looked after the painting work in Lao Tzu House, and then worked in Osho Publications. From 1991–1997 he taught at Ko Hsuan in Devon, UK, and after a sojourn again in 2001 he also became a passionate photographer. In 2013 he relocated to the Japanese Alps with his partner, Amrapali. surendraphoto.com – all articles by this author on Osho News

A Love Letter to Humanity