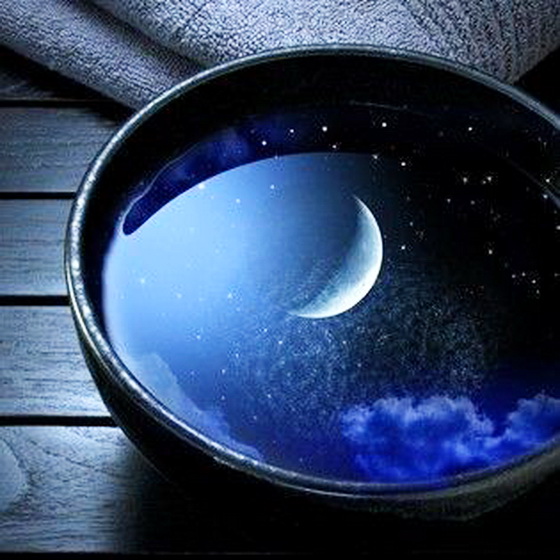 One night the poet, Awhadi of Kerman (a very great Muslim poet) was sitting on his porch, bent over a vessel.

Shams-i-Tabrizi, a great Sufi mystic, happened to pass by.

Shams-i-Tabrizi looked at the poet, at what he was doing. He asked the poet, “What are you doing?”

The poet said, “Contemplating the moon in a bowl of water.”

Shams-e-Tabrizi started laughing, with an uproarious laughter, a mad laughter.

Shams-e-Tabrizi said, “Unless you have broken your neck, why don’t you look directly at the moon in the sky?”

Seeking truth in scriptures, seeking truth in philosophies, is looking at the reflection. If you ask somebody else how you should live your life, you are asking for misguidance, because that man can only talk about his own life. And never, never, are two lives the same. Whatsoever he can say or impart to you will be about his own life – and that too only if he has lived. He may have asked somebody else, he may have followed somebody else, he may have been an imitator himself. Then it is a reflection of a reflection. And centuries pass and people go on reflecting the reflection of the reflection of the reflection – and the real moon is always there in the sky waiting for you. It is your moon, it is your sky, look directly. Be immediate about it. Why borrow my eyes or anybody else’s eyes? You have been given eyes, beautiful eyes, to see, and to see directly. Why borrow understanding from anybody? Remember, it may be understanding to me. but the moment you borrow it, it becomes knowledge to you — it is no more understanding.

Understanding is only that which has been experienced by the person himself.

Quote by Osho from The Art of Dying – Talks on Hassidism, Ch 1

Shams-i-Tabrīzī (Persian: شمس تبریزی‎‎) or Shams al-Din Mohammad (1185–1248) was a Persian Muslim who is credited as the spiritual instructor of Mewlānā Jalāl ad-Dīn Muhammad Balkhi, also known as Rumi and is referenced with great reverence in Rumi’s poetic collection, in particular Diwan-i Shams-i Tabrīzī (The Works of Shams of Tabriz).

No man is lonely while eating spaghetti