The Rubáiyát – history’s most luxurious book of poetry

In 1909, two London bookbinders were commissioned to create a book that would become one of the most bedazzling the world had beheld. Joobin Bekhrad reveals how it ended up at the bottom of the Atlantic – and how it still influences today. Published on BBC on January 11, 2018.

“When the Titanic went down on the night of April 14, 1912 in the sea off the New World, its most eminent victim was a book…” French-Lebanese author Amin Maalouf may have been stretching it a bit in his 1988 historical novel Samarkand. Or not, depending on whom you were to ask at the time. The book in question was a fictional manuscript of the Rubáiyát (Quatrains) by the 11th-Century Iranian polymath Omar Khayyám, prized because it was the only one in existence. In fact, a plethora of copies of the volume of Persian poems existed. There was, however, at the time the Titanic made its ill-fated voyage, one that outshone them all – not in terms of what was written within, but rather, its almost otherworldly appearance. It was this very real manuscript that served as the inspiration for Maalouf’s acclaimed novel.

“At the bottom of the Atlantic there is a book,” he writes in its introduction. “I am going to tell you its history.” 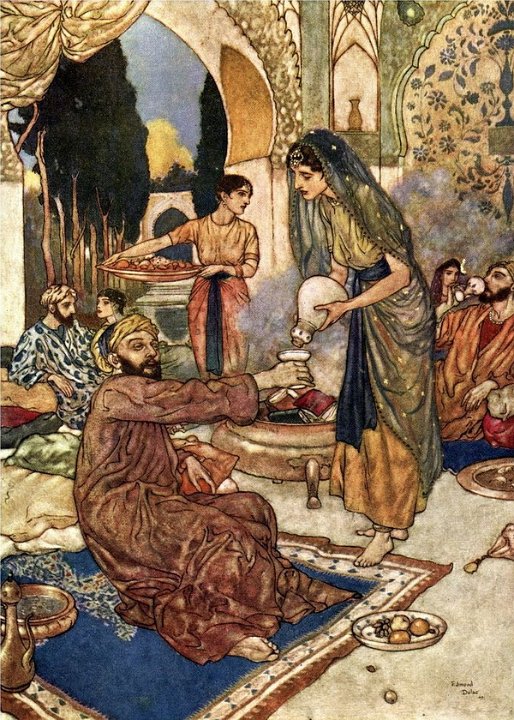 ‘Whoso desireth a peacock must endure the trials of Hindustan,’ says a popular Persian proverb. While this particular one refers to the Iranian monarch Nader Shah Afshar’s sacking of Delhi and looting of the famed Peacock Throne (amongst other things) in the mid-18th Century, it might just as well have been coined a few centuries later in London. With a desire to revive medieval traditions of bejewelled bookbinding, George Sutcliffe and Francis Sangorski were renowned throughout the city in the early 1900s for their opulent and over-the-top designs. Accordingly, it was to them that Henry Sotheran’s, a bookstore on Sackville Street, went to commission a book like no other.

Cost, according to Sotheran’s, was to be no object; the bookbinders were given carte blanche to let their imagination go wild and conjure the most bedazzling book the world would ever behold. Completed in 1911 after two years of intensive labour, the book – of Edward FitzGerald’s loose Victorian interpretations of Omar Khayyám’s poems, illustrated by Elihu Vedder – came to be known as ‘The Great Omar’, as well as ‘The Book Wonderful’, on account of its sheer splendour. Gracing its gilded cover were three peacocks with bejewelled tails, surrounded by intricate patterns and floral sprays typical of medieval Persian manuscripts, while a Greek bouzouki could be seen on the back. Over 1000 precious and semi-precious stones – rubies, turquoises, emeralds, and others – were used in its making, as well as nearly 5000 pieces of leather, silver, ivory, and ebony inlays, and 600 sheets of 22-karat gold leaf.

Although intended to be shipped to New York by Sotheran’s, the booksellers declined to pay the heavy duty imposed on it at US customs. It was returned to England, where it was bought by Gabriel Wells at a Sotheby’s auction for £450 – less than half its reserve price of £1,000. Wells, like Sotheran’s before him, intended to have the masterpiece shipped to America. Unluckily for him – and the world – it couldn’t be taken aboard the ship originally chosen.

The Titanic was next in line, and the rest needs no explanation. The story, however, didn’t end with the sinking of the Titanic, or even Sangorski’s strange death by drowning some weeks afterwards. Sutcliffe’s nephew Stanley Bray was determined to revive not only the memory of the Great Omar, but also the book itself. Using Sangorski’s original drawings, he managed – after a gruelling six years – to replicate the book, which was placed in a bank vault.

The Great Omar, it seemed, had been born under a bad sign, for, during the London Blitz of World War Two, it was – not unlike the poet’s wine jugs, symbolic of human frailty – dashed to pieces. Shaken, but not shattered, Bray once again rolled up his sleeves to produce yet another version of his uncle’s swan song. This time, however, its making wasn’t a matter of years, but decades. Completed after 40 years of on-and-off work, Bray’s tribulations were realised in another stunning reproduction, which he loaned to the British Library, and which his estate bequeathed to the institution following his death, where it can be seen today. “I am not in the least bit superstitious,” Bray remarked shortly before his demise, “even though they do say that the peacock is a symbol of disaster.”

What was the Rubáiyát of Omar Khayyám, and who was this enigmatic personage with whom Sotheran’s, as well as innumerable others, were fascinated? An 11th-Century polymath from eastern Iran, Khayyám was revered in his lifetime for his groundbreaking work in astronomy and mathematics. As with other Iranian polymaths like Ibn Sina (Avicenna), Khayyám was also a poet. That said, his poetry was unlike that of any other Persian poet before him, and he has occupied, for centuries, a place wholly unique in the grand corpus of classical Persian literature.

Owing to his inquisitive nature, Khayyám questioned things most around him took for granted: faith, the hereafter, and the meaning of life itself. He had little confidence in the promises of religion, with its talk of Heaven and Hell, and even expressed doubts regarding the logic of God. There was only one thing Khayyám was certain about, and which he cherished: this life.

He well understood – perhaps owing to the turbulent times during which he lived (Iran, then under Turkic occupation, had recently been invaded by Arabs, and the Mongol hordes would soon raze his homeland to the ground) – the transience of life and the inevitability of death, and the importance of seizing the all-too-brief moment we are allotted on earth. Any talk of the afterlife or religion he deemed hot air. As he wrote:

No one has seen Heaven or Hell, O heart of mine;
Who, say you, has come from that realm, O heart of mine?
Our hopes and fears are pinned to that to which,
Save a name and notion, we can naught else assign.

Although he often lamented the ephemerality of life, he also resolved to enjoy himself – with copious amounts of wine (and a few sweethearts, too).

If Goethe had been enamoured of Hafez, and Voltaire Sa’di, the Victorian poet Edward FitzGerald found a kindred Iranian spirit in Khayyám, ‘The Old Tentmaker’. When he turned his attention to Khayyám, he had already translated from the Persian Jami’s Salaman and Absal, as well as an abridged version of Attar’s Conference of the Birds. It was the Rubáiyát, however, that was to prove his magnum opus. Although not exactly a translation of the original Persian poems, FitzGerald’s very loose interpretation captured, to no small degree, the spirit of the Rubáiyát and the poet’s Weltanschauung – hence the reference to the author as ‘FitzOmar’.

While it enjoyed little popularity upon its release, the slim yet profound volume soon came to enjoy a popularity FitzGerald could never have imagined. In the late 19th Century, an elite literary salon in London – the still-active Omar Khayyám Club – was named after Khayyám. FitzGerald’s rendition of the Rubáiyát also served as a source of inspiration for Pre-Raphaelite artists such as William Morris, who produced two illuminated manuscripts of it, the second of which also contained illustrations by Edward Burne-Jones.

Countless other editions were also produced, with every manner of illustration, by artists such as Edmund Dulac and Edmund Joseph Sullivan. One illustration by the latter, in fact, later came to grace the Grateful Dead’s self-titled 1971 album. Elsewhere, the acclaimed short story writer Hector Hugh Munro chose the nom de plume ‘Saki’ (the title Khayyám used to address his cupbearer), while Agatha Christie’s 1942 novel The Moving Finger had a FitzOmar poem as its namesake. That’s not to mention the 1957 Hollywood film made about Khayyám, US actor Alfred Drake’s 1960 recitation of the entire Rubáiyát, and Martin Luther King’s quotation of him in a 1967 anti-war speech (he beat Bill Clinton to it by a few decades), amongst many other instances. In the 1950s, the Rubáiyát was so popular that more than half of it could be found in the compendiums Bartlett’s Quotations and The Oxford Book of Quotations.

Khayyám’s poetry has, undeniably, stood the test of time. In his native Iran, he is a towering figure whose book of verse, like that of Hafez’s, is very much a household staple. FitzGerald’s rendition of the Rubáiyát is still, in spite of the prodigious liberties he took, the most well-known English version of it by far, and an English classic in its own right. Elsewhere around the world, his poems can be read in virtually every language imaginable. As such, it’s perhaps no mystery why Sotheran’s chose the Rubáiyát as the raison d’être of Sutcliffe and Sangorski’s bound marvel. But why? How could the words of an 11th-Century polymath have any relevance not only in the Victorian era and the mid-20th Century, but also today?

The answer lies in the timelessness of the Rubáiyát, and its universal truths that know not culture, religion, or creed. Indeed, in today’s uncertain times, the Rubáiyát may be even more relevant than during the tumultuous times in which it was originally written. What would the author of the most luxurious book of poetry ever made have to say about our mad, mad world, were he around today? Perhaps, to quote the sage:

How swiftly does this caravan of life pass;
Seek thou the moment that with joy does lapse.
Saghi, why lament tomorrow’s misfortunes today?
Bring forth the chalice, for the night shall pass.

www.bbc.com – all poetry translations by the author – illustrations sourced by Osho News

2. My Time Was Over Long Ago