Marc looks at Billy Graham’s life, purpose and impact he had on former leading statesmen and many other followers – and also quotes what Osho says about him. 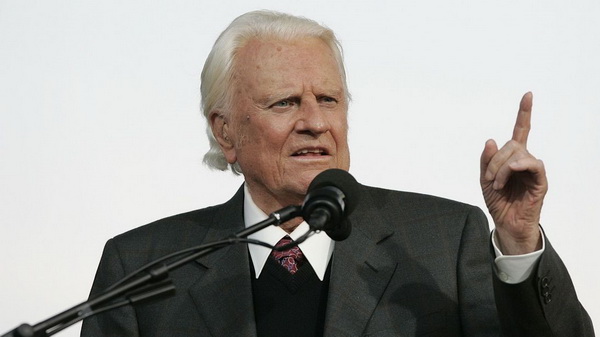 William Franklin Graham Jr. (7 November 7 1918 – 21 February 2018) was an American evangelical Christian evangelist and an ordained Southern Baptist minister who became well known internationally after 1949. He has been looked upon as one of the most influential preachers of the 20th century. He held large indoor and outdoor rallies with sermons that were broadcast on radio and television, some still being re-broadcast into the 21st century.

In his six decades of television, Graham hosted annual Billy Graham Crusades, which ran from 1947 until his retirement in 2005. He also hosted the popular radio show Hour of Decision from 1950 to 1954. He repudiated segregation. In addition to his religious aims, he helped shape the worldview of a huge number of people who came from different backgrounds, leading them to find a relationship between the Bible and contemporary secular viewpoints.

Graham preached to live audiences of about 215 million people in more than 185 countries and territories through various meetings, including BMS World Mission and Global Mission. He also reached hundreds of millions more through television, video, film and webcasts.

Graham was a spiritual adviser to American presidents and provided spiritual counsel for every president from Harry Truman to Barack Obama. He was particularly close to Dwight D. Eisenhower, Lyndon B. Johnson (one of Graham’s best friends), and Richard Nixon.  It was his relationship with the latter that would prove the most damaging to his stellar reputation. Despite boasting of a long history of supporting Israel and Jews – Nixon had offered him the job of becoming the ambassador to the country – the gradual release of the 1972 White House tapes from the National Archive displayed a different side to the preacher. He could be heard making numerous anti-semitic remarks, referring to Jews as pornographers, and agreeing with Nixon that the US media was dominated by liberal Jews who would send the United States “down the drain.”

He insisted on racial integration for his revivals and crusades in 1953 and invited Martin Luther King Jr. to preach jointly at a revival in New York City in 1957. Graham bailed King out of jail in the 1960s when King was arrested during demonstrations. He was also lifelong friends with another televangelist, the founding pastor of the Crystal Cathedral, Robert H. Schuller, whom Graham talked into starting his own television ministry.

Graham stated that feminism was “an echo of our overall philosophy of permissiveness” and that women did not want to be “competitive juggernauts pitted against male chauvinists.” He further stated that the role of wife, mother, and homemaker was the destiny of “real womanhood” according to the Judeo-Christian ethic. Graham’s assertions, published in the Ladies’ Home Journal, elicited letters of protest, and were offered as rebuttal to the establishment of “The New Feminism” section of the publication. A following sit-in protest at the Journal’s offices demanded female representation on the staff of the publication.

Graham was notoriously known for his practice of not spending time alone with any woman other than his wife. This has become known as the Billy Graham rule, and it has been increasingly recognized that this rule is sexist in practice if not in theory. This rule in particular is being debated anew in the wake of news that US Vice President Mike Pence follows it.

Graham’s daughter, Bunny, recounts her father denying her and her sisters higher education. She remembers being groomed for the life of wife, homemaker, and mother. “There was never an idea of a career for us,” she said. “I wanted to go to nursing school – Wheaton had a five-year program – but Daddy said no. No reason, no explanation, just ‘No.’ It wasn’t confrontational and he wasn’t angry, but when he decided, that was the end of it.” She added, “He has forgotten that. Mother has not.”

Graham talked his future wife, Ruth, into abandoning her ambition to evangelize in Tibet in favour of following him – and that not to choose his course would be “to thwart God’s obvious will.” After Ruth agreed to marry Graham, he cited the Bible for claiming authority over her, saying “then I’ll do the leading and you do the following.”

Graham operated a variety of media and publishing outlets. According to his staff, more than 3.2 million people have responded to the invitation at Billy Graham Crusades to “accept Jesus Christ as their personal savior.” As of 2008, Graham’s estimated lifetime audience, including radio and television broadcasts, topped 2.2 billion. Because of his crusades, Graham preached the gospel to more people in person than anyone in the history of Christianity. Graham was repeatedly on Gallup’s list of most admired men and women. He appeared on the list 60 times since 1955, more than any other individual in the world.

Osho mentioned Billy Graham several times in the context of his discourses and at his most compassionate said he is good entertainment, with nothing spiritual in it.

On another occasion Osho stated:

Just the other night I was talking to a woman journalist. She had come directly from Billy Graham – she had been covering Billy Graham for three weeks, and of course she asked about him. And I said, “He is a worthless man. None of my sannyasins will be impressed with that idiot, and none of his audience is going to understand me. His audience consists of retarded people. His face itself looks retarded. Whenever I see his photograph I simply close my eyes. He looks like a chimpanzee, well shaved.”

I told her, “My work and his work are totally opposite, diametrically opposite. He is giving consolation to people so they can sleep better. He is telling them, ‘Have faith in Jesus Christ, he is the savior. He can do anything, he is the only begotten son of God. If things are not happening to you, if miracles are not happening to you, that only shows your faith is not enough. Have more faith and your life will be filled with miracles.'”

This is consoling people, helping them to go into deeper sleep. My work is totally different.

And sooner or later you are going to get tired of all these things that I am doing to you. You will have to open your eyes and see what is happening. Those who are not courageous enough to wake up, those camels start moving on the county road which goes to Santa Fe, with all their blankets, with their sleeping bags.

Only courageous people can remain with me, because I may throw ice-cold water over you. And if nothing else works, then some electric shock.

But I am determined to wake you!

Marc is a regular contributor

Shout “Holi Hai!” and get away with anything… almost!

The Rubáiyát – history’s most luxurious book of poetry