Is it possible for a man who is still not enlightened, to encounter death consciously?

In love as well as in meditation the moment of dissolving, disappearing, is so tremendously beautiful. Is it possible for a man who is still not egoless, not enlightened, to encounter death consciously and to welcome and enjoy it the same way? You are everywhere. But after we will have died, shall we find ourselves in such a state that it will be possible for us to remain attuned to you whether you are in the body or not? Would you please talk on death?

It is a significant question, and very urgent too. It is from Ma Ananda Shefali. She is a very, very old woman, and she will be facing death sooner or later. And it is good to prepare, it is good to go ready into death.

Shefali need not be afraid: she has been deeply in meditation and she has loved intensely. She’s the old woman I was talking about just a few days ago, who has become like a child, whose child is born, who is no more a camel and no more a lion, who has become the child. She has forgotten her body; the body does not matter. Only the body ages. The body lives in time, the innermost core is always beyond time; it is never born and never dies. The body is born and the body dies. The mind is constantly being born and constantly going into death, but there is a witness inside you who goes on watching the whole play. That witnessing is your real being. It simply watches. It watches birth, it watches love, it watches meditation, it watches death. The only quality there is one of witnessing, pure mirroring. It simply mirrors whatsoever happens.

Shefali need not be afraid. I am absolutely happy with her work on herself. She has had great courage. To become a child again needs guts – it needs guts because the whole world will be laughing at you. The whole world will think you have gone mad. You will not find support anywhere, you will lose your respectability. People will start avoiding you; that’s what happened to Shefali.

When she went back to Holland she wrote to me: “It is strange. Friends are avoiding me. People whom I have known my whole life simply try not to come across me. And I have brought such joy to them, and I have brought an open heart.”

But who wants an open heart? Who wants joy? People are searching for misery. People hoard misery, people cling to their hell. They avoid anything that can bring joy to them as long as they can. They always find alibis, rationalizations. Bliss is condemned, misery is respected.

It really needs courage to go against this whole crowd of the world, this miserable crowd. Nobody knows ways of joy, nobody dances, nobody sings. And suddenly you burst into song! They all feel shocked: “Something has gone wrong.” They all start improving upon you, they all start advising you. They are altogether against you. You are dangerous! The fear arises in the mind of the crowd: “Who knows? You may be right.” The doubt arises. And if you are right, then they are all wrong. This is unacceptable. You have to be wrong; only then can they feel safe that they are right. Hence, they crucified Jesus.

As Christians paint Jesus – sad and miserable…. If he had really been that type of man, nobody would have bothered to crucify him. People would have loved him, respected him. People would have declared him a saint. But he was a celebrating man, he was celebrating the small things of life – drinking, feasting, meeting friends. He was bringing a different quality to religion. That was unacceptable, that could not be tolerated. They had to crucify him. They had to shut him up, they had to tell him to be quiet! And he was so dangerous that to allow him to remain alive was risky; he had to be destroyed. And then they created a Jesus of their own, as they would have liked the real Jesus to be — sad, miserable, on the cross. It is not just an accident that Christianity has taken the cross as the symbol. Death as a symbol? A crucified man as a symbol? It makes you sad.

When you go into a church the whole atmosphere is sad. The atmosphere is that of a cemetery; it is bound to be so. The church is created around the cross not around Christ, remember! So I call Christianity ‘crossianity’, not Christianity. The space that is created in a church is around the cross. Take the cross away and Christianity will disappear. Let Christ dance and Christianity will disappear. Let him take a flute, let him play, let him sing, and all your bishops and archbishops and popes and priests will be shocked: “What is this man doing?” They will crucify him again. They can only believe in a crucified life, they can only believe in a corpse. They are against life, they are anti-life.

Shefali has been courageous, and one who is courageous in life will be courageous in death too. She has learned that to be courageous is the only way to be. No need for her to be afraid; she can go into death dancing. Death will only reveal that which has been revealed in love and in meditation – it will reveal it more profoundly, that’s all. What has been just a glimpse in meditation and love will become an absolute reality in death. Death is the highest kind of love and the highest kind of meditative energy.

If one knows how to die, death is transformed. You are not destroyed! You destroy death when you know how to die – smiling, a laughter in your being, welcoming. Death is not there; it is only God, your Beloved coming to you. It is a misunderstanding when you call it death. Death, as such, exists not: one only simply changes the body and the journey continues. Death, at the most, is an overnight stay in a caravanserai. In the morning, you go again. Life continues.

Death is a rest. Death is not death at all – you are not destroyed. Life cannot be destroyed! Life is eternal, death is just an episode in it. And death is not against life either, it is complementary to life. It is a rest, it is a pause. You have been singing so much, you need a little rest – your throat is tired, your vocal-chords are tired. You have been dancing so much; for seventy, eighty years you have been dancing – your legs are tired, you would like to have a little relaxation. Death allows you that relaxation. You have been laughing and living and loving – death gives you a chance to revive again. Death vitalizes you, it does not destroy. Death is non-existential. It is just like deep sleep – a little longer, a little deeper, but just like sleep.

And if you have loved, then your love remains. If you have meditated, your meditation remains. Whatsoever you have gained in the inner world remains, whatsoever you have been hoarding in the outer world is gone. Death can only take that which you possess. Death cannot take that which you are. Money you possess; it will be taken. Power you possess; it will be taken away. Meditation you don’t possess. It is not a thing to be possessed by you, it is a quality of your being. It is you! Love you don’t possess; it is not a possession, it is being. The interior wealth will go with you, the exterior wealth will be taken away. Because the exterior belongs to the body, the body will fall, and the whole exterior world will fall with it and will disappear with it.

Shefali can go happily. When death comes, she can go dancing, praying. She will find the Beloved in it.

Her fear is also true: she’s afraid that she is not yet egoless. That is the beginning of egolessness – to feel “I am not yet egoless.” The egoists never feel that; they think they are egoless. It is the feeling that “I am still with the ego” that gives the first hint, the first ray of the morning sun.

My feeling about Shefali is that her death will become her satori, her samadhi. I have been watching her progress towards inner being closely – just a very, very small distance is left. If she can accept death totally, that distance will be destroyed, she will take the quantum leap.

These are the three points to become enlightened: one is meditation, another is love, the third is death. And death is the greatest because death is the most natural. Love… may happen, may not happen. It is not an inevitability. Millions of people decide to live without love. They live but they never love; so it is not a necessary phenomenon, it can be avoided. And meditation – you have to go into it, you have to make efforts, you have to search and seek – it is arduous. Very few people go on that adventure. Love is more natural in that sense, because it is something built-in in your being. Meditation is not so built-in. People miss even love, so what to say about meditation? Even fewer people go in the direction of meditation.

Death takes your body away – suddenly ninety percent of your life evaporates. Death takes your mind away, then the remaining ten percent is also gone. Only the witness is left – this is what meditation is. Death takes all your attachments away, all your lusts away, and when all lust and all attachments are gone love-energy is pure. It is no more a relationship, it becomes a state of being. Death simply cleanses your love and your meditativeness. Your awareness and your love are both bathed, and they come out absolutely clean and purified in death. If you go joyously death can become your samadhi. It can become, certainly, to Shefali.

And she asks, Is it possible for a man who is still not egoless, not enlightened, to encounter death consciously and to welcome and enjoy it the same way?

You are everywhere. But after we will have died, shall we find ourselves in such a state that it will be possible for us to remain attuned to you whether you are in the body or not?

To melt from you directly into God is difficult. The enormity of it is such that you may shrink back. You need a Christ between you and God, because the Christ is human and divine – that is the dual nature of the Christ or the Master. He is like you, you can hold his hands. Once you hold his hands, slowly, slowly you find that his hands are disappearing and you have entered unknowingly into the enormous, into the infinite. But by that time you cannot shrink back, by that time you have already tasted – you are drunk.

God is like an ocean… you may feel afraid. The Master is like a small spring; you need not be afraid. You can dance with the spring, you can let the spring fall on you, you can allow the showering. But in that very showering slowly, slowly you will be gone. And then you will be ready to go into the ocean, into the enormous, into the infinite. 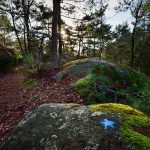 Governments are going to use drugs to reduce people to zombies