A gorgeous blonde from Australia was sent on her way to Heaven. Upon arrival, a concerned St. Peter met her at the Pearly Gates.

“I’m sorry,” he said, “but Heaven is suffering from an overload of godly souls and we have been forced to put up an Entrance Exam for new arrivals.”

“That’s cool!” she smiled. “What does the Entrance Exam consist of?”

“The first is,” said St. Peter, “which two days of the week start with the letter “T”?

“The second is, how many seconds are there in a year?”

“The third is, what was the name of the swagman in Waltzing Matilda?”

“Now,” said St. Peter, “go away and think about those questions and when I call upon you, I shall expect you to have those answers for me.”

So the gorgeous blonde went away and gave those three questions some considerable thought (we expect you are doing the same).

The following morning, St. Peter called upon the gorgeous young woman and asked if she had considered the questions, to which she replied, “I have.”

“Well then,” said St. Peter, “Which two days of the week start with the letter T?”

She answered, “Today and Tomorrow.”

St Peter pondered this answer for some time, and decided that indeed the answer could be applied to the question.

“Well then, could I have your answer to the second of the three questions,” St. Peter droned on, “how many seconds in a year?”

“Only twelve!” exclaimed St Peter, “How did you arrive at that figure?”

St. Peter looked at her and said, “I need some time to consider your answer before I can give you a decision.” And he walked away, shaking his head.

However, a short time later, he returned and said, “I’ll allow the answer to stand, but you need to get the third and final question absolutely correct to be allowed into Heaven. Now, can you tell me the answer to the name of the swagman in Waltzing Matilda?”

The gorgeous blonde smiled, “Of the three questions, I found that the easiest to answer!”

“Really!” exclaimed St Peter, “And what is the answer?”

This totally floored St. Peter and he paced this way and that, deliberating the answer. Finally, he coulnd’t stand the suspense any longer, and turning to the gorgeous blonde asked, “How in God’s name did you arrive at that answer?”

And so it came about that she entered Heaven.

…you’re singing it now, aren’t you? 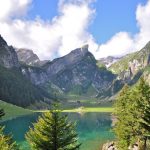 Impressions from the Appenzell 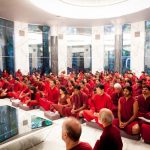 What Is a Samadhi?

Giovanni and the whistling