Widely reported in the media, cow slaughter in Maharashtra state has been banned.

Indian president Pranab Mukherjee has a approved a bill long in coming – 19 years – i.e. the ban of cow slaughter and sale and consumption of beef in the state of Maharashtra, which includes India’s largest city, Mumbai. Included in the ban is the killing of bulls and bullocks and even the possession of beef.

80% of India’s population of 1, 2 billion are Hindus who revere cows and sale and consumption of beef is banned or restricted in many states. However, the media reported that although most beef sold in India is from water buffalos which are not considered sacred and apparently of inferior quality its ban will be most likely felt the most. People breaking the law will be fined and might face prison time up to five years.

The ban has provoked outrage and humour on social media and there is concern what is supposed to happen to animals too old to produce milk or reproduce.

Prime Minister Narendra Modi has been expressing support for bringing in a national ban on cow slaughter.

Ultimately we are alone 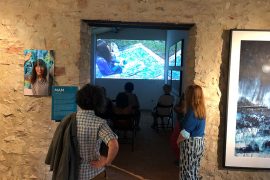