The Devonian Period, the age of the fish

The Devonian is a relatively warm period and probably lacks any glaciers. The temperature gradient from the equator to the poles is not as large as it is today.

The Devonian is notable for the rapid diversification in fish. Many of them grow to large sizes and are fearsome predators. The first abundant genus of shark, Cladoselache, appears in the oceans during the Devonian Period. The Devonian seas are dominated by brachiopods. 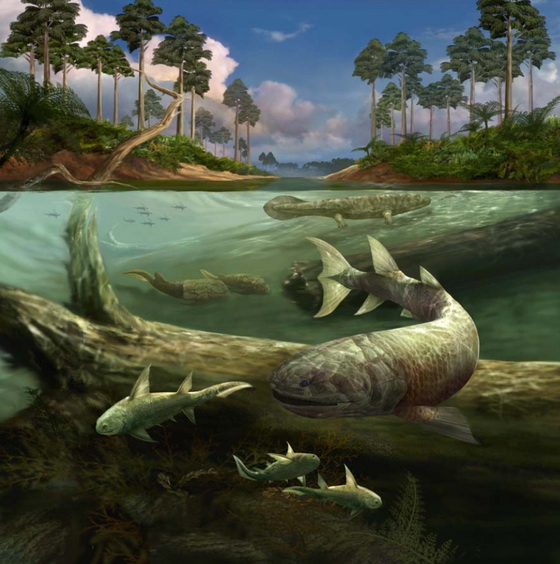 Plants, which had begun colonizing the land during the Silurian Period, continue to make evolutionary progress during the Devonian.

At the start of the Devonian, early terrestrial vegetation continues to spread. This vegetation of the early Devonian consists primarily of small plants, the tallest being only a meter high.

By the end of the Devonian, ferns, horsetails and seed plants appear, producing the first trees and the first forests. Archaeopteris is one of these first successful trees. Archaeopteris can grow up to 30 meters (98 feet) tall, with a trunk diameter of more than 3 feet. It has a softwood trunk, similar to modern conifers, that grows in sequential rings. It does not have true leaves, but fern-like structures connected directly to the branches, lacking the stems of true leaves.

Prehistoric pond. Computer artwork of life in and around a freshwater pond during the Upper Devonian period (around 360 million years ago). In the foreground are two Ichthyostega tetrapods. Basically half fish-half land animal, these creatures are each about three feet long. Between them in the water are several marine arthropods, known as trilobites. Further beyond in the water is a 12 inch long Bothriolepis prehistoric fish (Placoderm). Most of the plant life is varieties of fern, including the tall trees known as Archaeopteris. Credit to Walter Myers

All animals descending from the last common ancestor of amphibians, reptiles and mammals are tetrapods, even if they have secondarily lost their ‘four feet’. Early tetrapods probably evolve from lobe-finned fishes, able to use their muscular fins to take advantage of the predator-free and food-rich environment of the new wetland ecosystems.

The earliest known tetrapod is Tiktaalik. Dated from the mid-Devonian, this fossil creature is considered to be the link between the lobe-finned fishes and early amphibians. Tiktaalik is probably mostly aquatic, “walking” on the bottom of shallow water estuaries.

Tiktaalik has a fish-like pelvis, but its hind limbs are larger and stronger than those in front, suggesting it is able to propel itself outside of an aquatic environment.  It has a crocodile-like head, a moveable neck and nostrils for breathing air.

Significant changes in the world’s geography take place during the Devonian. During this period the world’s land is collected into two supercontinents, Gondwana and Laurasia.

Gondwana consists of present-day Africa, South America, Antarctica, Australia and India and occupies most of the Southern Hemisphere. Laurasia (also known as Eur-America, Lau-Russia, the Old Red Continent or the Old Red Sandstone Continent) is a minor supercontinent, created as the result of a collision between Laurentia, Baltica and Avalonia.

These vast landmasses lie relatively near each other in a single hemisphere, while a vast ocean covers the rest of the globe. These supercontinents are surrounded on all sides by subduction zones. With the development of the subduction zone between Gondwana and Laurasia, a major collision is set in motion that will bring the two together to form the single world-continent Pangea in the Permian.

By the Devonian, the early Paleozoic oceans are closing, forming a ‘pre- Pangea’. Freshwater fish are able to migrate from the southern hemisphere continents to North America and Europe. Forests grow for the first time in the equatorial regions of Arctic Canada.

Land plants as well as freshwater species, such as our tetrapod ancestors, are relatively unaffected by the Late Devonian extinction event.

Glaciation and the lowering of the global sea level may have triggered this crisis, since evidence suggests that warm water marine species are most affected. Meteorite impacts are also been blamed for the mass extinction, or changes in atmospheric carbon dioxide. It is even conceivable that it is the evolution and the spread of forests and the first plants with complex root systems that may have altered the global climate.

The ‘greening‘ of the continents may have acted as a carbon dioxide sink and atmospheric levels of this greenhouse gas may have dropped. This may have cooled the climate and led to the massive extinction event.

Thanks to the University of California, Berkeley, Museum of Paleontolog; to Wikipedia; to LiveScience; to Christopher R. Scotese for the map; and to Neil Shubin for finding Tiktaalik and for his book ‘Your Inner Fish’

101 Thoughts While Trying To Poop In A Public Stall

God creates man out of mud and bakes him

The parrot and the freedom fighter