Beloved Osho,
Not long ago, in a discourse, I heard you say that you hated spaghetti. Then recently, you said you hated suntans.

And now, just the other day, I heard you say that the only thing you hated was income tax. Does this mean that you don’t hate spaghetti and suntans anymore? Or is there some mysterious connection between these three seemingly unrelated phenomena?

I don’t hate anything. But just when I am talking to you, there are points which have to be emphasized. And when I say I hate spaghetti, I am simply emphasizing something. Hatred is not part of my being at all. In fact, I have never tasted spaghetti, and perhaps I will never taste it because of an accident. 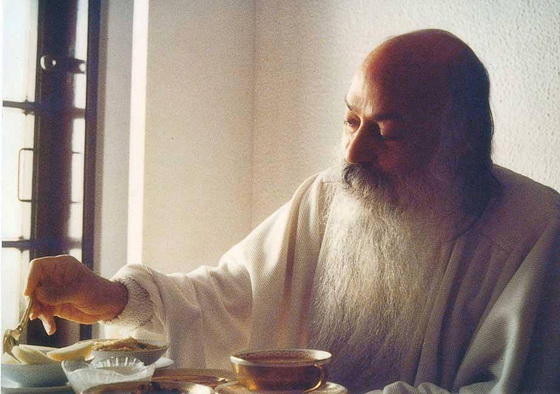 One Italian woman, a professor with a doctorate from the University of Rome, used to be my sannyasin. But she had strange habits: one was that I don’t think she had ever taken a single shower in her life. She used to stink. And she went putting on powder, layers of powder… she was a beautiful woman. And it was she who made me so much afraid of spaghetti, because she prepared spaghetti one day and brought it for me to eat. The spaghetti was smelling of her.

I told her, “Out, you just go out of the room. Leave the spaghetti, I will eat… but I always eat alone. You just go out.” And as she went out, the first thing was: I threw her spaghetti down the toilet. And the smell was so dangerous that even today – it must be twenty-six, twenty-seven years ago – but suddenly, if I remember spaghetti, I remember the woman and the smell. And then it is no more a memory; I have to live it again. That’s why I say, “I hate”; otherwise, I have never tasted spaghetti. It just came in a wrong way to me, through a wrong vehicle.

A suntan also I don’t hate, but certainly I don’t like, because to me it seems a modern way of self-torture. It is something masochistic, lying down in the hot sun. All over the world millions of women are suffering, and nobody protests that – “Stop this nonsense!” And that suntan does not remain long. You are simply sunburned. In a few days, you are healed and you are back to your normal color.

If one really wants to be a little less white, a suntan is not the way. You need a certain pigment to be injected into your body, and then you will remain, for your whole life, the color you wanted. A suntan to me always looks something like religious self-torture; the beaches are full… there is no space on the beaches on a sunny day.

I don’t hate – why should I hate? It has nothing to do with me. I simply don’t like… I myself don’t like to go into the sun. I love to see the sun from my air-conditioned room.

A wealthy English tourist visiting America was curious about the native American Indians. After touring one reservation, she asked her guide why some men had more feathers than others in their headdresses.

Disturbed that any culture could possibly have such a crude custom, she decided to ask the tribal chief for further explanation. “Why are there so many feathers in you headdress, chief?” she asked.

“Me chief, so me fuck them all. Big, small, short, tall, make no difference.”

The English lady was mortified. “You ought to be hung,” she snorted.

“You damned right,” said the chief. “Me hung like buffalo.”

“Well,” she cried. “You don’t have to be so damned hostile!”

Tears in her eyes, and red with embarrassment, the woman cried, “Oh dear, Oh dear.” To which the chief replied, “No deer! Me no fuck deer! Asshole too high. Fuckers run too fast!”

I have just been joking. I don’t hate anybody… neither the spaghetti, nor the suntan, nor the tax collectors. But when I am speaking, I never say anything that I have prepared beforehand and whatever I say, I want to say with my totality, with my spontaneity. My word “hate” is simply a total expression of my dislike.

Editing in the flow

River Rafting on the John Day

What are you cooking during lockdown?