“My dear Earthling, how many Earths do you see rising?”

Article 45: Last call of our astronomer – and of the international scientific consensus as well – this time about the shocking effects of (over-)population and (over-)consumption on the planet and the people.

The recent rapid increase in human population over the past three centuries – and especially over the last 70 years – has raised serious concern that the planet may not be able to sustain present or future numbers of inhabitants.

The 1993 InterAcademy Panel Statement on Population Growth – an international scientist consensus document, discussing and demanding a halt of the population expansion; the first worldwide joint statement of academies of sciences – stated that many environmental problems, such as rising levels of atmospheric carbon dioxide, global warming and pollution are aggravated by the population expansion.

According to the World Meteorology Organization, the years 2010, 2005 and 1998 ranked as the hottest on record and the ten warmest years on record have all occurred since 1998.

But raw numbers of people are only one factor in the effects of people. Their lifestyle, resulting in footprints, is equally important. The carbon footprint is one of the family of footprint indicators, which also includes the water footprint and the land footprint.

The water footprint of an individual, a community or a business, is defined as the total volume of freshwater used to produce the goods and services consumed by the individual or community or produced by the business.

The land footprint is a consumption-based indicator, i.e. it looks at the resources needed to create a final product, or by an organization or a country, wherever they are in the world.

For example, cows will require land to graze on within a country, but may also be fed by feed grown on land in another country.

The three primary greenhouse gases in the Earth’s atmosphere are carbon dioxide, methane and ozone. Without greenhouse gases, the average temperature of Earth’s surface would be about – 18 C (0°F), colder than the present average of 14°C (57°F). But since the beginning of the Industrial Revolution (taken as the year 1750), human activities have produced a 40% increase in the atmospheric concentration of carbon dioxide, from 280 parts per million (ppm) in 1750 to 400 ppm in 2015. Anthropogenic carbon dioxide (CO2) emissions (i.e. emissions produced by human activities) come from combustion of carbon-based fuels, principally coal, oil and natural gas, along with deforestation.

In 2008 The New York Times stated that the inhabitants of the developed nations of the world consume resources like coal and oil at a rate almost 32 times greater than those of the developing world, who make up the majority of the human population.

Credit: Down to Earth Climate Change

For the planet, 2015 was more than a full degree Celsius (1.8°F) warmer than temperatures in 1880, when consistent record-keeping began – according to scientists from NASA and the National Oceanic and Atmospheric Administration, who released their analyses together, but independently of one another, on January 20, 2016. The scientific opinion on climate change is the overall judgment among scientists regarding whether global warming is occurring, and (if so) its causes and probable consequences. The scientific consensus is that the Earth’s climate system is unequivocally warming and that it is extremely likely – meaning, of at least 95% probability or higher – that humans are causing most of it through activities that increase concentrations of greenhouse gases in the atmosphere, such as deforestation and burning fossil fuels, causing most of the rise in temperatures since 1950. No doubt, life on Earth has survived large climate changes in the past and extinctions and major redistribution of species have been associated with many of them.

But now it is different: now we are here and now we are one of the species threatened! Now we are living in coastal cities in danger of a rise in sea level, now we are living on land increasingly too dry or too wet and in societies under the pressure of human migration on a large scale. This time there will be humans hanging around, in great numbers, and we are those humans. This time global warming will affect us! We ourselves will see…

Huge amounts of methane are stored around the world in the sea floor in the form of solid methane hydrates. Climate warming, however, could cause the hydrates to destabilize. The methane, a potent greenhouse gas, would escape into the atmosphere and could even accelerate climate change. The future warming of methane deposits may release more methane to the atmosphere, creating more global warming.

This cycle could repeat itself many times.

To summarize this catastrophic scenario: 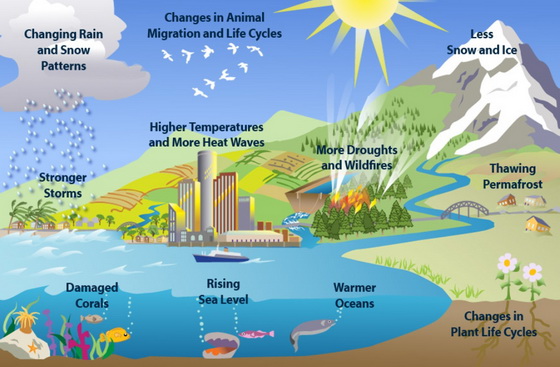 And even now you haven’t seen yet all the bad news!

Apart from global warming and its consequences, over-population and over-consumption are the roots of other problems too.

We are watching them already and we may see increasingly…

David Attenborough described the level of human population as a multiplier of all other environmental problems.

A study by the United Nations Environment Program (UNEP), which involved 1400 scientists and took five years to prepare, found “that human consumption had far outstripped available resources: each person on Earth now requires a third more land to supply his or her needs than the planet can supply.”

But my dear Earthling, how many Earths do you see rising?”

Thanks to Wikipedia, the free encyclopedia, for the postings of the Common heritage of mankind, Human overpopulation, the Effects of global warming and the Scientific opinion on climate change; to the Yearbooks of the Worldwatch Institute, to Maggie L. Walser for ‘Carbon footprint’, published in the Encyclopedia of Earth, and to Down to Earth Climate Change.

My Day of Ashes

The story of Angulimala or a murderer’s road to enlightenment