To Read Wittgenstein is Really an Experience

Osho: “Of this century I consider Ludwig Wittgenstein the most important philosopher.”

He has not written much, and he is the only Western philosopher of all time who has written only in maxims, what we call sutras. In the East that has always been the case. Those who had any glimpse, any taste, have written sutras – telegraphic, using as small a quantity of words as possible.

Ludwig Wittgenstein, in his famous book, Tractacus, has one sutra which makes him not only a philosopher but also a mystic. But he commits the same mistake which Rinzai was trying not to commit. The sutra is: That which cannot be said should not be said. He was alive; I wrote him a letter saying, “You have said it. At least one quality of it you have brought into language.”

He was sick and he died very soon. His brother answered me, “Your question he received with great respect, and he said to me, ‘It is true that if nothing can be said, then even to say this is to say something. I am sick and I am tired. If I get well I will answer, but if I die you answer for me: in the second edition of Tractacus we will leave this sutra empty, just a space.'”

If you experience only things which can be explained, described, defined, then your world is very small and your mind is very childish. You go beyond mind only when you start experiencing things which mind finds itself incapable of bringing to language. To transcend language is one of the most significant things for anyone who is intelligent enough; otherwise, as far as idiots are concerned, they can express everything. They have never experienced anything which goes beyond mind.

In ancient times it was impossible… because young people could not give an equal weight to what they were saying; their experience was so small. Now the whole thing has changed, so much so that I can say that it has moved one-hundred-and-eighty degrees. Because of the educational systems, now experience is not the only way to know; in fact it is a very long way to know. By education you can know by a shortcut. What a man may be able to know in ninety years of his life, you can know within one year.

Bertrand Russell was simply shocked, but he was an authentic man, an honest man. He accepted that: “Ludwig Wittgenstein, although my student, knows far more than I know because he went by a shortcut and I had to go by a long route. He went by a shortcut, became acquainted with everything that I had written, and started arguing against me in such a way that only a tremendously experienced person could.”

Bertrand Russell was so impressed in his few days’ contact with Ludwig Wittgenstein that he said to Wittgenstein, “Don’t waste your time, you have nothing to learn from me. You already know more.”

Wittgenstein used to write a few notes in the class. Bertrand Russell just asked him, “I would like to see your notes.” And when he saw those notes he said, “These notes are so significant that they should be published.”

But Wittgenstein said, “I am not writing for publication, I was just noting down any idea that was coming to me. This book is very raw, it is not a book for publication.”

Bertrand Russell said, “Publish it as it is, and I am going to write the introduction for it.”

Those notes have been published and they proved revolutionary. They are just fragments, because they were not written as an essay or an article – just any ideas that came to him. But because the book, Tractacus Logico-Philosophicus, became so famous – it was only a tract, but it became so famous that no other book in philosophy is as famous in this century – and was so profound, it gave an idea to Wittgenstein. He never wrote any other books in a different fashion – it became his style just to write notes, fragments.

The fame of the book proved that when you write an essay your idea has to be spread all over the essay and it loses its intensity, its sharpness. It becomes more understandable but less penetrating. When it is just like a maxim, a bare, naked statement with no decorations around it, it simply hits deeper, although it will be understood by only very few people – people who have the capacity to see in the seed the whole tree, which is not yet existent but is only a potentiality.

And a man can see in the seed the whole tree.

To read Wittgenstein is really an experience. To read anybody else is like having the food chewed for you and then you eating it. With Wittgenstein, it seems he is simply placing the food in front of you: you have to chew it, you have to digest it. You have to find out what it means.

Ordinarily the philosopher tries to convince you of what he means. He tries to prevent you going astray from his meaning, and he gives you the whole package with all the details. But he leaves nothing for you, no homework for you. He is not helping your intelligence; he is, in fact, destroying you. When you start living on liquid food, soon you will be incapable of digesting solid food. The liquid food will destroy your capacity to digest the solid food.

But Bertrand Russell didn’t say to Wittgenstein, “You are too young” – no. And that should be the attitude of a genuine thinker.

Education has brought in a new methodology. Within days you can read, just sitting in a library, in a university, all that took Pythagoras his whole life to collect; and it is all available to you. So when a boy comes home from the university… trouble has arisen in the world. In the past it was always the father who was right, the grandfather was even more right. Now it is not so; it is now the young man who is right, because even if the father had been to university, that was thirty years before, and in thirty years so much has changed. 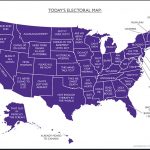 Today’s Electorial Map of the USA