Excerpt from the book, ‘When A Real Lion Meets A Real Master’ by Swatantra Sarjano, who recalls taking photographs of Osho in Kathmandu, at the beginning of Osho’s world tour.

[Sarjano uses the third person form to describe his experiences.]

It was beautiful to live in a room close to the Master, a room that had the prerogative, asked for specifically by Osho, to be the darkest room of the whole hotel, something that he realized the day on which Osho agreed to be photographed in his room in his ordinariness.

When he entered Osho’s room, he understood instantly that it was too dark to make any pictures, and asked him if he wouldn’t mind to come with him to his room just in front, since there it was full of light.

Osho followed him along with Vivek, but once they entered he noticed in horror that there were some noticeable sperm stains on top of his bed!

He thought that there was certainly no point his night’s activity being known everywhere and he managed with supreme nonchalance to throw a huge pillow on it. He then asked Osho who meanwhile had accommodated himself on a big chair, to do just something normal, something usual to him, so that he could make some pictures of the quotidian life of the Master during a common day, but at this point Osho closed his eyes and seemed to be dissolving into samadhi, and he almost started crying: “No, not like this! Please do something, anything, but do something… have a cup of tea, eat a sandwich, have a little beer, but do something, pleeeease!”

Osho looked at him laughing, and then asked to Vivek to bring him a cup for tea, empty, from where he pretended to sip his drink like the consummate actor that he was. After he had shot a few pictures of Osho while drinking his tea, he asked him if Vivek could comb his beard while he would photograph the entire scene. The Master approved, creating thus a memorable sequence in which the only effort from Osho’s side was to not burst out with laughter for how much this scene was amusing him! 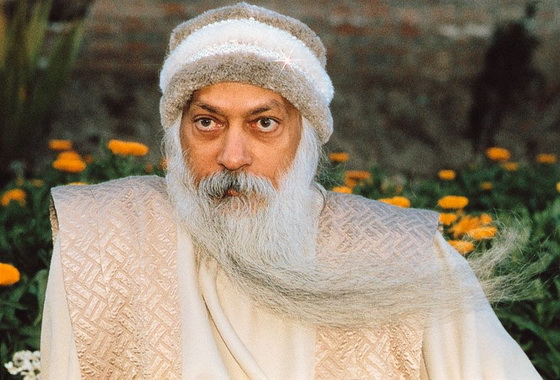 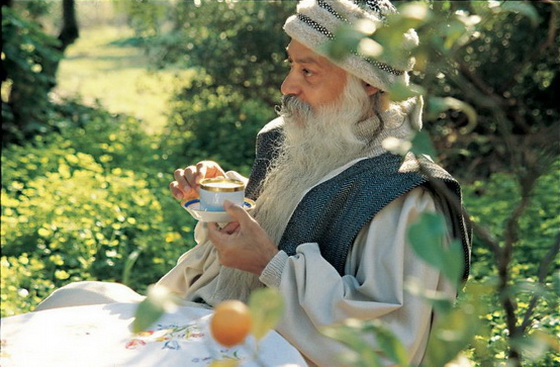 He was going to have even more fun when our photographer invited him to come out on the huge balcony to sit at the vast table there, proposing to him to have a real cup of tea this time, along with Vivek, Shunyo, and Anando, his faithful lawyer. According to him it wouldn’t only be a nice photo, but most importantly an image that nobody had ever seen before, a photo of the Master sitting with his girlfriends sipping tea, just like an absolutely commonplace person, such as an old uncle surrounded by his grand-daughters.

Nonetheless, the three girls absolutely didn’t want to sit there to have tea with Osho, because they found it very disrespectful; hence he had to intervene and ask the Master to invite them himself, so perhaps they would stop making all this fuss!

Osho looked at the girls incredulously, because obviously he couldn’t understand their pseudo-problem, and invited them all to sit with him and drink tea, making sure that they smile for the camera!

He spent two marvelous weeks there, photographing Osho every day for half an hour, until the day before his departure he asked him through Vivek if he could photograph him sitting in the garden, amongst the beautiful flowers that were blossoming all around.

Vivek came the same day to tell him that it was okay with Osho, and that the next morning he could have his photo session with him, in any spot of the garden that he liked. Then, being the perfect caretaker that she was, she suggested to him to buy a couple of small, nice carpets, “because it wouldn’t be nice to have him sit on the grass like a vagabond!”

He went straight to town to buy these little carpets, and he bought even some small colored pillows, but only after he had told her that it was a bit of a weird idea, because it would be much more natural if he could photograph Osho just sitting simply on the grass. However, she insisted on those carpets, and she got them.

The next morning when he went to his appointment in the garden, carrying all the pillows in his hands and the carpets draped over his shoulder, Osho asked him why he had brought all this stuff, and he told him that this had been Vivek’s request, so that he could have something to sit on and didn’t have to sit on top of the grass. To his surprise Osho replied: “It is much better if I sit simply on the grass, it will be much more natural.”

At these words he looked at Vivek with that Neapolitan expression that can be translated into words as ‘tie’! – and he could finally have his session with the result that (hopefully) everybody has seen those great photographs.

Sarjano is a regular contributor

Articles by this author on Osho News 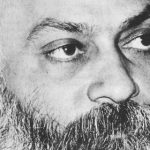 The cause changes, the war continues 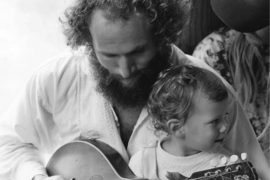 How you were born 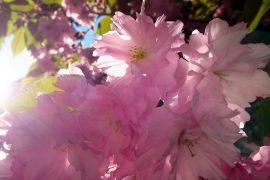 A symphony in Pink