Inside the fir forest

A poem by Michael Graber.

The wolf waits, more patient than most hungry mammals. A skull wrapped in fur sings a song only the birds and dying understand. I don’t know how the white dress on the goddess-looking woman stays so unblemished in this wilderness. Her face is even purer, cleaner. But it is her bare feet that catch my eye; they seem to melt the snow. What is she drinking out of that silver goblet? Whose dream is this? Hanging upside down and laughing is a centaur. How did that horse body climb the tree? His laugh sounds like an invitation. The one with the monkey mask and rattle just squats and shifts, swaying over some kind of curried jerky he’s been drying over the fire. The warrior wears prayer beads – and she – the warrior is a 55-year old woman with bright silver hair and the legs of a tennis player – smiles when I look up, a little startled. She radiates love. The man dancing around the fire looks Bedouin. His chant sounds like the moans at a funeral or a mother giving birth. His dance circles the energy, creating an elevator of light that goes from the lower, middle, and upper worlds. Once glance at his grimace and you see how far these divine enthusiasms can travel – there is no way back to what was. This is home, now, for the spirit. It took a while to spot the one wearing owl feathers in another tree, but the humming and scribbling on parchment gave it away. At once, all go silent, then all speak at once in different languages. Oddly, I comprehend. “Thank you,” I say, “I know you gather so infrequently, so it must be important.” They say, “Welcome. Feast. And know that each of us will appear when the need arises. You don’t have to figure it all out, you don’t have to do anything but do your work; we’ll carry you over the transoms and back and ensure safe passage. Embark. One plea: let it flow through and don’t take credit of the work of this world.” All form semi circle and offer food and chilled water with pear in it. “Your job is to tap the potential of those who seek it from you,” says the Owl, “letting what is possible get born as mature.” “And removing the blocks,” says the silver-haired warrior queen. “It is a sacred calling,” adds the Goddess. “But don’t let that squelch the joy, sacred means reverent but not solemn,” says the monkey mask. The skull in furs grabs something from the fire, and says to me, “and don’t forget to eat.” The centaur laughs a human laugh and the Bedouin sounds a pensive, plaintive song in a minor key.

Michael Graber is a poet, musician, and businessman from Memphis, TN – southerngrowthstudio.com 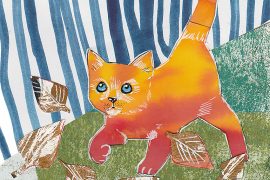 Early in the morning