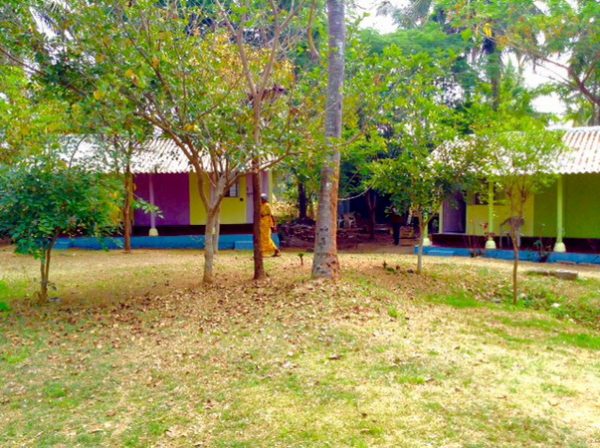 A healthy biosphere, as everyone knows, has a broad mix of trees, plants, insects, reptiles, birds and animals. The broader the mix the more resilient the system.

Osho clearly understood this as he built up his sphere of work. For example – to those who started meditation centres, he gave a free hand. Across the world there were centres following any and all modes of being; from those that held meditations throughout the day every day to those that never did; from those that segregated men and women to those that coupled them; from those that kept a dry Zen culture to those that celebrated juicy Sufi values. He even let friends publish books of their understanding of his teachings under his name. Such is his trust. (See Dinner with Osho by Savita Brandt.)

Osho Sannidhi Meditation Centre is a tiny green island of love, laughter, meditation and good food in a great ocean of golden rice paddies not far from Mysore, Karnataka. Like any normal Osho ashram the shortest distance between two points is often a building site; the symptom of energy and expansion. If you are looking for an aloof international five star resort don’t come here. Here is soul.

Here are half a dozen resident friends who throw their energy into everything that’s needed, be it cooking, cleaning, fixing the electrics or the irrigation system, planting trees, building a new suite of rooms or running meditations.

I went there for a month’s retreat and felt blessed.

I asked its founder Swami Venu Gopal how the centre came into being. “Back in 1999 there were three of us. We were running round the countryside attending Osho meditation camps. We bought this bare piece of land for ourselves to meditate at weekends. Just the three of us. Then there were six. And then ten. Then twenty. By 2004 there were 60 people coming. So, along the way we had to start planting trees for shade and gardens for food and putting up buildings for shelter – a place to meditate, a kitchen, dormitories and bedrooms, bathrooms. It all happened organically.

“I had been working as a lawyer in the city. After a while I realised some of the friends were staying here all week, working. I hadn’t asked them to stay, I didn’t want the responsibility. However, they took it on themselves and from 2006 a regular monthly camp started to happen. When we needed electricity, it seemed an impossible task. The local government could not afford the cost and yet we got it all set up in 15 days to celebrate the Master’s birthday. How? With His blessings. And look! Those half a dozen friends have been living and working here for 12 years now.”

In the early days of my stay I interrupted those six friends sitting at dinner laughing and teasing each other. I asked them how they survived financially.

“By running the monthly meditation camps,” they said. “That brings in enough for the month.”

“But you could easily run two or three camps a month here,” I suggested.

“We have enough, who needs more than enough?”

I asked Venu what the difficulties were that he had encountered over the years.

“Difficulties?” he looked surprised. He looked around him at the density of trees surrounding us, the bonnet macaque monkeys bouncing high up in the coconut palms and the half-feral dog gazing up at them. “Difficulties? Not one. Not an iota. Less than zero. Look – nothing was planned. Without asking, everything is taken care of. The local council built up the road (a causeway over the rice paddies), I stopped my work, we translate, publish and sell Osho’s books, and we run the meditation camps. These friends look after all the practical things and I do the financial stuff. I’m always surprised how things happen – like now for these en-suite rooms we are building and the little meditation room – the money just comes in.”

Here’s a story of Osho Sannidhi that reveals its atmosphere. A local doctor came for a 4-day retreat and brought his old mother along for the ride. She spoke no English or Hindi, only the local Kannada. When the group finished she decided to stay. She was too old to work and appeared to have no notion of meditation but day in and day out she was there sitting under a tree or slowly walking about, smiling or laughing and learning to hug.

I spent a rich, rewarding month in that corner of perennial India. It is sunny, slow, fertile, unpolluted: and I was welcomed by people who are loving and joyous members of the Osho family. And, speaking of healthy biospheres, in my first two weeks I spotted 59 different species of birds in and around that small green acreage.

Friends, if you are looking for an authentic Osho meditation centre of peace and meditation, life and celebration – check them out.

Rashid is a regular contributor – rashidmaxwell.com
He is the author of The Only Life: Osho, Laxmi and a Journey of the Heart
All articles by this author on Osho News

Being 17 in Kiev, Ukraine

Osho and Himalayas: A good combo