Living through another inferno and on

The fires in NSW, Australia are ongoing. Nirada sent us an update, and we also heard from Agneya.

Barely recovered from the recent bushfires and still in full swing cleaning their home near Bega, another fire in the area began to fan out. On the photos in the slideshow below you can see the remnants of Nirada and Neehar’s cottage, which Neehar had transformed into a large walk-in cooler, where they used to stock all the produce they would sell (mainly fruit), as well as their bulk bins of grains and beans, olive oil, garlic and onion crop drying on racks, heirloom seeds, supplements and more. It also contained a full workshop with all the gardening tools and fertilizers, building materials… It is now all gone.

They have moved back into the shed, where they have always enjoyed a simple life; they have two bedrooms, a living space with a fireplace and a kitchen corner. The most important thing for them is the well they drilled, and that they have never run out of clean water. 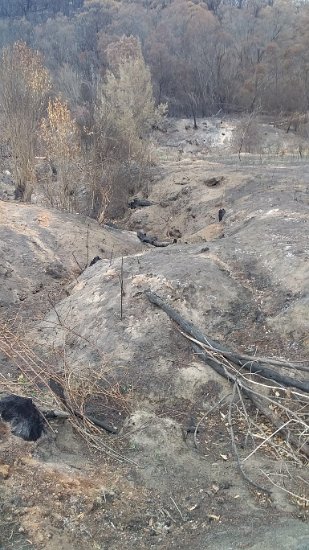 Nirada wrote: I just heard from Sangito who lives in Quaama, that the town of Bermagui (Bega Valley Shire) is presently seriously evacuating again – another fire began to fan out. She’s got Brook and Jake from Coolagolite staying with her tonight… fire really does go through twice with the right winds and there still is some unburnt fuel around. Just to the north in Cobargo are many burnt properties where other friends and also Agneya lives.

Also evacuating have been Manshar and folks at Beauty Point, Akolele and Wallaga… also central Tilba. Cuttagee is cut off because of the Mumballa mountain fire… and there is fire in Canberra near the Airport Industrial Complex, relatively close to Viren and Bhavana in Dickson.

We can see the dark orange sky spreading from Rocky Hall, still about 40 km from here, although this is not so far for these kind of fires. Pushpanand and Vadvyas couldn’t get there to go home and reckon they will probably lose it… and Su and Helen got out on time from Burragate to Merimbula Evacuation Center (much further south from Bega).

We realised today that the best place for people to evacuate to is not the Bega Show Grounds but the Woolies complex (Woolworth’s)… park your car inside underneath and go up into the air conditioning… there are toilets, and food maybe too… or go to any solid brick church building without a lot of cedars and pines too close to it.

Just noticed outside the window the jacaranda trees putting out little green shoots up high and also the young oak trees and a couple of younger gum trees, so pretty, delicate, fragile… looks like nature will do anything it can to recover if still on this side of utterly burnt…

I keep on trying to clean the black soot and charred bits of stuff from surfaces and materials in the shed where we live, but these hairy winds just keep turning around and starting again…

People have come to understand that we cannot make any generalizations about the nature of bushfires… no previous experience holds true except for “get out while you still can!”

Neehar said it feels like war, but we’ve never experienced war and I’d bet it’s much, much tougher than this, plus no supportive evacuation centres would be on hand.

Temperatures down to 30 C now… I had dowsed that power would be back around 7 pm and remarkably it returned at 6.53 pm! Now to think about dinner… ah, boiled eggs and toast and a lettuce leaf or two.

The water tank is down to below half so we need to do some work to be able to pump up from the borewell… all material stuff only… while it doesn’t quite feel like dream material or an illusion at the moment, it’s certainly an amazing backdrop to the ‘true’ and reality!

We heard this morning from Tanmaya that he’s well and back at home in Tilba Tilba, about 1 ½ hrs north of here.

Friends will sell us a ‘new’ old Subaru which was evacuated before the new out-of-control fires started just south of here. No rain predicted until later in February. Power cuts happen frequently…

The scorched leaves that have fallen from trees reveal the black and grey earth with sparse blackened stems of trees still standing on the hillsides and range further up… fire to the immediate north has been controlled but the two new ones now some 20 km to the south are still cooking out of control.

Neehar rejigged the wires to the borewell and ran extension cords across the burnt rubble of the old cottage, so when the power isn’t intermittently off we can pump. I did the first washing of clothes in weeks yesterday before we were on the generator again… juggling the freezer and fridge with ice (which we buy from a pub!) works well to keep fresh food for us… but Italian organic canned beans and tomatoes are a great option!

There are no plans at this point or idea what will or can happen; thrown right into the here-now, Nirada added: It’s probably more fruitful to watch the mind’s desires and dislikes and stick it out, until the bullshit personality and identify stuff dissolves at last. Quit thinking and we’ve got it made! And will there be a somebody left who will have got it made? Or could it be just a quiet disappearing into nothingness… now there’s another lovely thought…

On another note, Agneya sent an account about his ordeal with the previous fires to Rashid, who passed it on to Osho News:

Survived the night of hell, absolute Armageddon. [Before the fires came] I was alone, waiting, ready to start the sprinklers and go into the bunker. I’d had one false alarm around midnight but the red glow and roar passed to the west so I just did anything I could that might help moving things away from west and north facing walls, wetting down things that weren’t covered by sprinklers. And then this massive red glow and almighty roar came at about 3.30 am, so I restarted all the sprinklers and went into the bunker as this tornado of fire went overhead. I actually opened the bunker door too early and a mass of embers and smoke came in; I slammed it shut and waited a few more minutes and went out to battle…

Luckily I am not a couch potato! Everything seemed as if it were on fire but luckily the house wasn’t and the workshop and garage seemed OK.However, the shack and garden shed / greenhouse weren’t, so I was frantically going back and forth until the fire got inside both buildings and I could only save the shack.

How I survived I don’t know; the smoke and heat were bad enough but inside the shack the smoke was so thick I could barely see my hand and breathing… well, I say no more. Anyway, I managed and, in the end, only lost the garden shed / greenhouse and the garden of course.

The bush looked like it had been hit by a nuclear holocaust and by around 8 am it was over and I just protected the little caravan as the garden shed burned; the smoke and ash burned our eyes, throat and lungs. Then, during the day the wind stopped and at 2 pm it was almost dark from all the smoke.

Salila’s house and garage survived because they stayed in her bunker but John lost everything, all his cars as well. He literally only has the clothes he was wearing at the time.

Most of the neighbours lost their houses because they left in time, which was just as well because they would not have survived. On my road I met a couple walking from Yowrie with burns on their bodies – they had lost everything and were trying to get to Cobargo. Many roads were closed, people needed medical attention and not a plane, helicopter, ambulance, police fire brigade in sight; we were completely on our own.

One of the farmers I used to milk for and his son died in Wandella; half of one side of Cobargo’s main drag burned down during a night from hell. My beautiful garden is gone and who knows what other infrastructures I haven’t looked at yet. The solar system seems to work; nobody else has power as all the power lines are down.

How I survived… I just had my chook with me (yes, I only had one left; the others were taken by a fox, then a snake, and then a goanna) and I wore my mala of course for company in the bunker….

At least I’m here to tell the tale.

Related article
News from Down Under – January 13, 2020 – Bush fires raging for weeks in Australia’s state of New South Wales have impacted the lives of thousands of people, among them sannyasin friends, writes Bhagawati

Devageet, there is nothing to be worried about