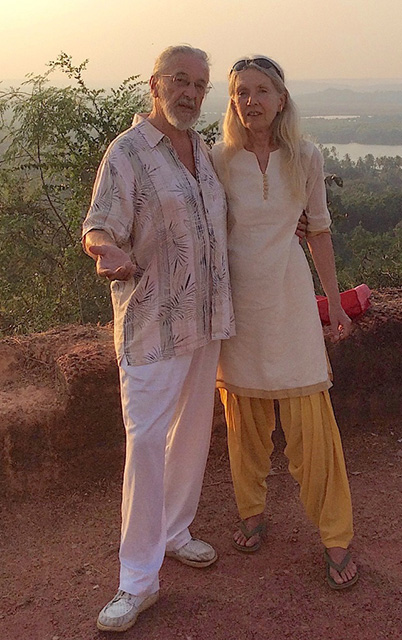 Beloved Ma Pankaj was born in Germany in 1950 and became a teacher. Her real life, though, started with Osho. When exactly she took sannyas, we don’t know.

From the beginning of Poona 2 she lived there and spent the whole day in the ashram. There she worked, sang, ran, played theatre. Later she immersed herself totally in Tibetan Pulsing, which became her love and her home.

In 2001, she returned to live in Germany and visited Goa every winter. She took care of her old mother for a while, but after her death she found life in Germany a bit hard (which, especially people in Germany, will probably understand…) and missed the commune deeply.

Those who knew her will remember her running, especially on Goa beaches, with big steps, her long blond hair swinging behind her, remember her laughter and tears, her craziness and tenderness, her colourful clothes, chosen with particular taste and talent.

Writing this down, I realize how little facts I know about her life – and how the facts are not important. What is important for me, is her will to live, her love of nature, her big laughter (sometimes) and, above all, her deep love for Osho which was unshakable and the only constant in her life.

When about a year ago she came to know that she was seriously ill (it was discovered so late that there was no cure any longer), she wanted to live, kept making plans for the future and wanted to live independently as long as possible. But it was too late for that.

Only a week before her leaving the body, she went into a hospice in Mannheim, Germany, which was a beautiful, quiet place full of love and respect. There she finally relaxed and felt taken care of. Friends came to see and sit with her, touched by the silence and the peaceful atmosphere around her.

She took her last breaths around the time when a documentary about “the Osho movement” was broadcast on German TV (the hospice staff told us…). Yahoo!

I had the privilege to be able to stay with her for many hours daily in the hospice.

Through Facebook many, many messages, words of love, appreciation and goodbyes poured in. I read them to her… she received them with a smile, later with a soft facial expression. We all had been deeply connected in Panky’s last days.

Music from the World of Osho, soft ones and the songs we used to sing fullheartedly, accompanied her last few days. The hospice room became our sanctuary.

As she was in transition around 19th January, a time of sharing our love worldwide and celebrations everywhere, the music group of the Osho Mahabodhi Meditation Center in Heidelberg, Germany (where she used to go sing and meditate too) added a singing and meditation event especially for her.

The Candolim, Goa, singing group around Shantidharma, of which she was a yearly regular, included her too in their event of the 19th January… She was certainly embedded in song and music for her transition!

Panky and I were deeply connected through our years of meditating together in the same area of our former Buddha Hall, our roaring laughter at Osho’s jokes… we just had to look at each other (wherever we met!) and the “Shampoo”-Joke (yes, go and find it, it’s hilarious!!) got us cracking up again. Thank you, beloved Panky, you keep on living in our hearts.

You can leave a message / tribute / anecdote using our contact form (pls add ‘Pankaj’ in the subject field).

I just come to know, you left the body… and I am sure you did so with a huge laughter. We understood each other’s “craziness”, had many smiles in understanding, sang together in Goa, walked along the beach, also hand in hand through Pune ashram where you helped me with the kids corner – and to meet you, was always pleasant. It was such joy to watch you on the Pune theatre stage with my daughter Sahajo, being just 6 years old. I wished to have photos!

I hoped to see you again, hearing from Preyas – you lived around her… Time runs too quickly for me to keep up with all I wish “to do”.

I just moved from the U.S. back to Germany and arranged myself in a new house. I have everything gifted from the universe but miss the contact with my Sannyasin friends from Pune times. Since the Master left the body, we suddenly spread in all directions to live a new life outside the community. I held much in my heart, even dreamt over the years from scenes in the ashram, but seldom met old friends.

I come to hear about your leaving this world in Osho New. You, Devageet and more and more. Now it’s too late, at least to hug you in person. I embrace you to my heart and shower you with the tears of recognition, which just now flow freely.

You are in my heart.
In love with love.
Blessings for your travel onwards
I might soon share with you.

Living through another inferno and on