Since 2005, Robert Mays and his wife Suzanne have made a huge contribution to science by conducting concentrated research into the nature of consciousness.

They studied hundreds of cases of NDE’s (Near Death Experiences), including those where people report what they see and hear as they begin to die and seem to separate from their bodies. They see the mind as an ‘energetic entity’ that separates from the body as people die; hence their conclusion that mind survives death.

In a series of articles on NDE’s in the Durham Herald-Sun (North Carolina, USA) Mays states, “If we take what the near-death experiencers are saying, the mind will go to a place which is very positive. It’s what everybody would call heaven.

“We’re focusing on how the mind works with the brain and further implications. If we can demonstrate that the out-of-body part of the experience is real, then we think there’s strong evidence for these other things that are reported in the transcendent part, such as an afterlife, the existence of a heavenly realm and possibly even reincarnation.” Their statement is very carefully worded, favoring some vague ‘heavenly realm’ to “possibly even reincarnation.”  It is overshadowed by the conditioning and doctrines of two main religions, Christianity and Islam.

It is necessary to look further and with a naked, unconditioned eye. Osho says,

“Ordinarily when a person dies, it is only his physical body that dies, he and his mind do not die with the body. Ordinarily the mind of the dying person goes with him, and for a little while after death he retains all his memory of his previous life. It is like what happens with our dreams. After you wake up from sleep you remember your dreams for a little while. Slowly the memory of dreams begins to fade and by noontime it fades away completely. And by the evening you cannot say even a word about them.

Although you dream in your sleep, in your unconscious state, yet on waking you can clearly recall a few fragments of your dreams, particularly the latter part of your last dream. It happens because in the latter part of your sleep you begin to wake up and you are only half asleep. You can remember the dreams fully or partly that visit you in your half-asleep and half-waking state. But even this memory does not last long; as hours pass it disappears. In the same way a man’s bodiless soul remembers its previous life, its friends and relatives for a little while after his death. And this memory is rather painful, because he cannot relate with them anymore.

[…] When somebody dies suddenly or in an accident, he doesn’t know he is dead. For a little while he feels stunned and bewildered to see that he is separated from his body, maybe, something has gone wrong somewhere. It happens because inside the body nothing really dies except that the soul leaves the body. Not a few, but the majority of souls feel utterly confused and confounded soon after their death. No one can figure out why his family members are weeping and crying, why there is so much grief all around, because he feels as much alive as before, except that his body is a little separate from him. It is the body that gives him a sense of continuity, because it is the medium of all his associations with the past. Only meditative people, those who have experienced deep meditation can escape being pulled and bewildered, because they know that they are separate from their bodies.”

The Herald Sun further reports that part of what bothers Mays about much of the medical profession is how dismissive they can be when a patient tries to share a near-death experience. He doesn’t believe that doctors and nurses should pretend to believe them – only that they have an open mind.

“The medical profession should be neutral to the idea,” he said. “They don’t have to accept the idea that near-death experiencers are saying something real. But the experience to the patient is very real, and it’s actually quite profound and life-changing.”

“Too often,” he said, “when a patient starts to talk about the experience, a doctor or nurse says: ‘Well, that was just a hallucination, or it’s just the drugs, or we’re going to give you a little more sedative.’ That is psychologically devastating to the experiencer. Here you have this very profound experience – very real experience – and when somebody says that’s just a dream or hallucination or the drugs and we don’t believe you or we won’t accept that you had an experience, then the medical profession does terrible psychological damage.”

Although much research remains to be done, the Mays’ say, “For us, the real message to everyone is that you are a spiritual being. You have a mind that will go on after your physical body is dead.”

Read Osho’s discourse: Scientific Enquiry into Rebirth is Quite Possible

Related articles:
Bardo: An Interview with Veetman
Near Death Experience and the Blink Environment

Scientific enquiry into rebirth is quite possible

Experiencing Being out of the Body

It was a fight between death and your love 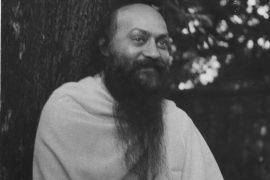 Either jump or don’t jump