… that resulted in several follow-up sessions. Because of his diminished healing response due to diabetes and asthma, Osho was experiencing ongoing acute pain.

[…] Within three hours I was called again. Osho told me the pain was very much worse. It was a dental emergency. I decided to cut away the dead and infected bone in order to produce a clean and newly bleeding socket. In this way we would be back at square one with the best chance of a good healing result. In addition, his doctor, Amrito, would provide supplemental systemic antibiotics and pain relieving medication. The operation took over an hour and proceeded without a hitch.

Two hours later, in the middle of the night, Osho called me again. “The pain is much, much more terrible.” I was at a complete loss. Surgically, I had done all I could do. Amrito and I could now only wait for the antibiotics and painkillers to kick in.

Over the course of the next days, two or three times each day I was called. I would renew the dental dressing and clean the wound. He was in severe, undiminishing facial pain and I felt utterly helpless.

[…] But despite our best efforts it got worse. Osho stopped coming to the evening meeting. His eating and drinking were severely affected, along with his sleeping. Although his complete physical balance was in chaos, each time I saw him he looked serene. His voice was soft and gentle. Osho had often told us that our fundamental nature is not rooted in the body-mind. “We are not the body, the mind or the emotions. Human beings are rooted in existence itself. We are part of the beyond, but we have forgotten our roots.” Osho’s demeanor and communication clearly showed the existential truth of his words. 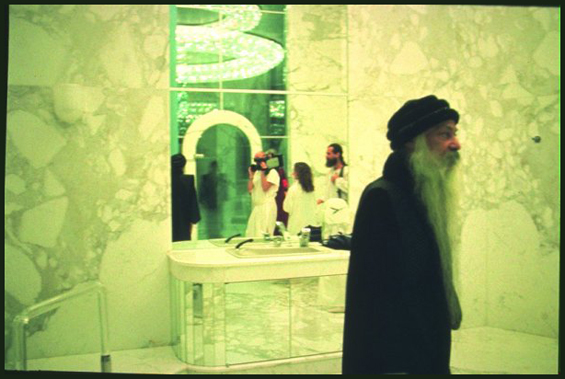 […] Avirbhava, Osho’s room caretaker, knew little of medicine, and had a highly-strung disposition. The sight of blood, teeth and surgical instruments appeared to make her jittery and anxious. Seeing our concern and noting our helplessness boosted her nervousness dramatically.

She was shared her alarm with her close friend, Yogi. Yogi was an American doctor, a specialist in pathology. He in turn shared his worry with Kavisha, a mature Jewish-American woman of considerable wisdom, great chutzpa and undeniable charisma.

Between Yogi, Kavisha and Avirbhava, the collective attitude to illness was to immediately summon the best specialist that money could buy.

As the days passed without any relief in his pain, the emotional pressure of Osho’s situation on Avirbhava was reaching boiling point. On more than one occasion, having heard Osho telling me that I was missing something, she had urgently whispered to me, “Why don’t we just fly in a specialist from the U.S.?” She told me, “Kavisha is in the States having her own dental work carried out by a fantastically qualified specialist. We could fly him in.”

[…] Hearing of his greatness, I had nodded numbly. Clearly Kavisha’s dentist was the best that money could buy. In my severe clinical impasse I felt at the very bottom of the scale of dental excellence, despite continual support from Doctor Modi. I would be only too glad to invite the great man to India, but I told her that only Osho made such decisions. When Avirbhava had suggested it to Osho, he had declined saying, “No, there’s no need to fly in a specialist. Devageet is doing perfectly well, but he is missing something.”

[…] I telephoned Kavisha’s specialist in America, telling him the situation. He quizzed me deeply and offered several different diagnoses, each one more terrible than the last. He told me in no uncertain terms that we should stop the antibiotic cover we had devised, and that Osho should immediately be placed on a mega-dosage penicillin regime for a minimum of six months. That was the only way, he emphasized, that we could hope to prevent the inevitable spread of infection that might, at best, cause him to lose his jawbone and most of his face, and at worst create a generalized septicemia that would undoubtedly kill him. My already deep anxiety was not diminished by his advice.

Amrito and I decided that massive long-term penicillin therapy, without having first knowing that the causative agent was sensitive to it, was not a good idea. Amrito argued convincingly that penicillin in high doses would have its own side effects on Osho, and without isolating the organism, we had no way to know if the infection would be reduced by the huge amounts of penicillin. And anyway, the antibiotics we were using were more powerful with a broader spectrum than penicillin. Changing the medication without having found the offending organism did not make clinical sense.

Osho himself was not enthusiastic to receive long-term penicillin therapy without there being a very good reason. His previous experience with penicillin had not been an unqualified success.

When I told Kavisha’s specialist of Osho’s response, he was outraged that we, his medical team, would listen to the opinion of a patient. “Hey, you guys! Who the hell is the doctor in your outfit? Who is supposed to know the best course of treatment, you guys or the patient?” His point was valid, but not in the world of Osho and his disciples. How to explain to the great man that this was a mystery school and not Mount Sinai Hospital?

It is true that the usual relationship between doctor and patient is not one of equals. The patient gives precedence to the expertise of the man in the white coat. The doctor is the one in power and control.

[…] Osho was more than our patient, he is our spiritual master, and we are his disciples. This was a difference that made all the difference. Although professionally attentive to each clinical situation, we were also very alert to the instructions we were receiving from Osho, knowing that he was using the clinical scenario for his own work of bringing us into a higher state of consciousness. It was a game of mirrors. It might appear to be dentistry, but the doctors were also on the operating table.

To an outsider, giving precedence to the patient seems like madness. But a Master uses each situation for his alchemy of transformation. Our professional knowledge, and other symbols of clinical power, became mere ingredients placed in the crucible of events. The abrasion between professional knowledge and the master-disciple trust provides the heat that burns away the apparent and exposes the real.

Our different worlds made my communication with the special specialist difficult and delicate. I told him that Osho was in charge of his own treatment and that Osho made his own clinical decisions based on accurate information.

My explanation brought his torrent of words to a shocked halt. I heard a muttered, “Jesus!” But he swiftly gathered himself before barking a request for Osho’s complete medical history going as far back into his childhood as we had records, “and fax it to me as quickly as you can,” he ordered.

That evening and most of the night I spent gathering the material he had requested and typing a fax of several pages. I stumbled into bed at 5:00 a.m.

A few minutes later I was awakened by a knock on my door. “Osho wants to see you.” It was Avirbhava’s voice. I told her to pass on the message to Nityamo, while I quickly threw on a thin robe and hurried into the dental room to switch on the air-conditioners. It took an hour for the special AC to cool the big room sufficiently for Osho’s comfort.

The dental room was in utter darkness as I entered. Dimly I caught sight of my reflection in the polished granite walls with their long, inset mirrors. Suddenly I was startled into awakening; there, standing in the darkness was Osho, looking at me.

Shocked, I raised my hands in namaste. His slight figure, almost lost in the depths of his night robe, seemed insubstantial. He returned my greeting, saying, “Geet, I have not been able to sleep. I could not find the light switch. Sit down, I have something important to tell you.”

Excerpt from the chapter ‘The Ear, The Tooth, and Beyond’
from Osho: The First Buddha in the Dentist Chair the newsly published book by Devageet

A former English dental surgeon, Devageet took sannyas in 1976. In 1978 he was invited to be Osho’s personal dentist and lived altogether 21 years in Osho’s communes. He developed ‘Oshodontics’, a groundbreaking therapeutic approach to self-healing and the self-transformation of individual consciousness by accessing body-held memories from physical organs and the teeth and jaws. He lives in England and conducts teaching seminars world-wide. oshodontics.com