The Shaolin Temple in Henan Province

The Shaolin Temple has a long and complicated history but the most famous spiritual figure that it is connected with is Bodhidharma. We all remember Osho’s frequent references to Bodhidharma sitting in a mountain cave facing the wall for nine years (this is actually a documented historical fact) and then coming down from the mountain to the temple below and giving Chan or Zen to the Chinese and then to the world. The cave is on Wuru Peak, one of the mountains in the Song Mountain range, and the temple is, of course, the Shaolin Temple.

Osho makes a less well-known reference to Bodhidharma in the following quote:

Beyond the mind there is only one laughter, but it resounds for centuries. The place where Bodhidharma became enlightened… I have been to that place. He became enlightened fourteen hundred years ago and people have made a temple in his memory, in the place where he laughed for the first time. And the story is that if you sit silently in the temple, you will still hear the laughter.

[…] I had not time to sit there in the temple, but I know that if you sit there in the temple in the silence of the forest, perhaps you may hear the laughter. Perhaps the mountains, the trees, the rocks around the temple are still vibrating with that great man. I have looked into the lives of many great people, but Bodhidharma stands apart … very strange and very unique.

It is possible that his laughter was so infectious that the trees started laughing and the mountains started laughing. Although Bodhidharma is dead, they are still laughing; they cannot stop it. If you go with the whole idea, perhaps you may really hear it – or you may imagine it. But I have come across people who have heard it, because they have told me.

I had gone there, but I had not time enough to stay in the temple, because the right time is in the middle of the night – when he had become enlightened. And particularly on a full-moon night in a certain month, if you stay in the temple, in the middle of the night there is every possibility that either you will hear the laughter or you will start laughing.

I have just returned from my seventh visit to Song Mountain, a place I love more than any other place on the planet. I knew of Osho’s comment in the above quote but had hitherto found it impossible to stay anywhere in the Shaolin temple compound. No woman would be allowed to stay in the temple itself – very much a male enclave! This time, however, I found that a small hostel had recently been built in the Shaolin village which is up in one of the valleys and which is where many kungfu students live. I decided to book in there on the full moon night in October to see if I could hear Bodhidharma laughing!

For me ‘the laughter’ would not necessarily be a ‘ho ho ho’ or a ‘ha ha ha’ but perhaps that blissful joy one feels in a state of deep meditation – that joy we so often felt in Osho’s presence which brought sweet smiles to our faces and giggles in our bellies.

Once the tourists have gone, the temple, nestled in a valley among monumental mountains, becomes a silent place – the only sounds being the subdued murmurs of the few people living there. I found a place to sit facing east where I assumed the full moon would rise, and softly descended into a peaceful meditation. Within a short time I sensed the dark cold evening becoming lighter and, opening my eyes, was rewarded with the sight of a huge golden moon just peeping over a mountain peak. The sky was totally clear so there was an uninterrupted view of the golden orb slowly ascending the heavens. After witnessing this impressive sight and taking a few photos I again closed my eyes and fell into a deep meditation until I was finally forced to move before I froze into solid ice. On standing up I turned towards Wuru Peak and Bodhidharma’s cave (couldn’t see it of course) and bowed deeply in homage. It was then that I felt a sudden soft laughter bubble deep within me and tears rolled down my face as I stood, hands folded, in the silence, beauty and energy of the full moon night.

This space happily stayed with me during the night and all the next day (I decided to stay another night) as I wandered around the compound, again went up Shaoshi Mountain via the cable car, and climbed as high up to Bodhidharma’s cave as this aging body would allow. The second night I again meditated on the rising moon and again felt deeply a familiar presence – maybe it was Osho, maybe Bodhidharma, I don’t want to define or try to put words to it. Simply I felt deeply in touch with something….

About twelve kilometers east of the Shaolin Temple at the foot of another mountain in the Song Mountain range is a Taoist temple, Zhongue Miao. I love this temple and the area around it and I have spent many hours meditating there. It has a much ‘softer’ energy than the Shaolin Temple and because it is not as famous there are far fewer tourists so it feels quieter and more meditative. This temple is actually much older than the Shaolin Temple and a shrine was first built there as early as about three hundred years BC – a time roughly corresponding to the times of Lao Tzu and Chuang Tzu. As Lao Tzu was born and lived in Henan Province there is a good possibility that he actually visited here. Very little is written about this temple in English (a future research project for me, I wonder?) so my facts are rather scarce but there is a sign in almost incomprehensible English seemingly saying that the temple embodies the Taoist principles, as set out by Lao Tzu, of the harmony between man, earth and heaven.

Zhongyue Miao was built principally to worship Song Mountain – although ‘worship’ is a wrong word. The feeling is more an embracing and acknowledging of the essence and harmony of nature of which the mountain is a powerful symbol. The energy here is very different to a Buddhist temple as there are no Buddha images and none of the ritualistic Buddhist behaviour found in most other Chinese temples. Very simple. In the central courtyard is a stone stele dating from around the tenth century which shows surprisingly modernistic symbols of the five sacred Taoist mountains. At the four corners of this square courtyard are huge rocks on which the symbols of four mountains are carved. The only discordant note in the temple is the central tribute to Song Mountain itself. This is in the shape of a bright yellow, plastic, simplified gourd which looks absolutely horrible and so out of place with the delicate and subtle beauty of the temple buildings! Each of the five Taoist mountains embodies one of the five Chinese medicine principles of earth, fire, metal, air and water. Song Mountain, the central mountain, is associated with earth.

To be honest, despite the connections with Bodhidharma in the Shaolin Temple, it is Zhongue Miao, built in homage to Song Mountain, that touches me most deeply. Maybe I was a Taoist in another life! 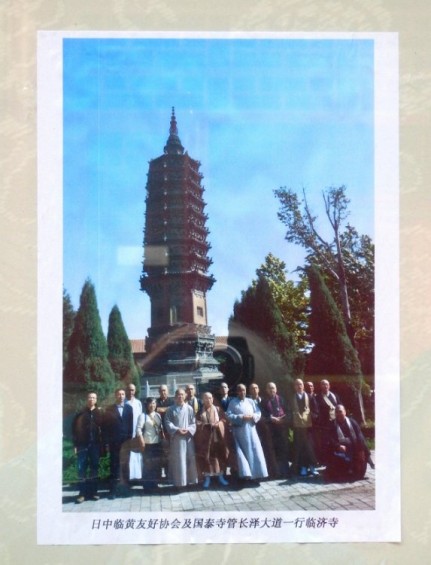 In my research for my book ‘A Mountain in China’ I was attempting to trace the path of Chan from Bodhidharma in China to Zen in Japan – as revealed by Osho rather than as reported factually by historians. Because Osho spoke so often of Rinzai I was especially interested in him but could find out very little until I realized that ‘Rinzai’ was actually the Japanese name for the Chinese master, Linji Yixuan, who lived in the ninth century. But the kind of information I wanted was limited and there were many dots which I could not connect up. My hopes for remedying this problem lay with a young friend’s uncle who is a Buddhist scholar and a professor of English at a university in a city called Shijiazhuang in Hebei province, on the way to Beijing. I had met him two years previously and he now kindly consented to meet me again and answer some of my questions. I prepared quite a dossier of questions on different topics, an important one of which was Linji Yixuan. I wanted to know who he was, where he came from, where he had lived and if he had a temple or a monastery where people could come and study with him. The one important fact I had was that a Japanese monk called Myoan Eisai (Chinese name Rongxi) had come to his ‘school’ in 1168, studied there awhile, and then took the Rinzai form of Zen back to Kamakura in Japan.

Despite my searching I could find no mention of a ‘school’ so you can imagine my astonishment when the professor kind of waived his hand in dismissal at my questions saying: ‘I will answer all those questions when I take you to his monastery tomorrow.’ Amazing! After all this hard graft, the school I was looking for was right here in this city! We duly spent a serene and beautiful afternoon in this small temple with its attached monastery in which about twenty monks live. And certainly, as we slowly walked around, every now and then one of Osho’s Zen stories popped into my delighted mind! It was very quiet and peaceful because not many people go there except groups of Japanese Zen disciples – but that afternoon there was almost nobody there and in the hazy light of the late winter afternoon it was a totally magical place. I am so grateful for this unexpected experience.

I feel blessed to have been able to have a taste of the ancient energy of these places. Ancient, yes, but Osho’s brilliance was to reveal and interpret – and ‘bring up to date’ – this profound heritage of deep insight and meditation in a way that twentieth century disciples can perhaps access, understand and imbibe to guide us on our own modern paths. Without those many wonderful years sitting in Osho’s presence as he revealed mysteries as yet unknown to us, I doubt very much that I could have experienced so intensely the energy of the eastern consciousness, ancient and modern. As always, my gratitude to my beloved Master is deep and never-ending.

God creates man out of mud and bakes him

Governments are going to use drugs to reduce people to zombies