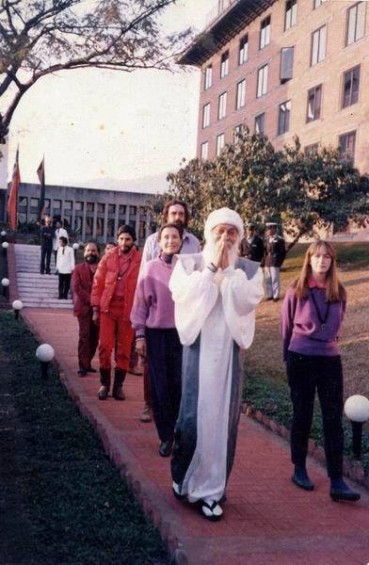 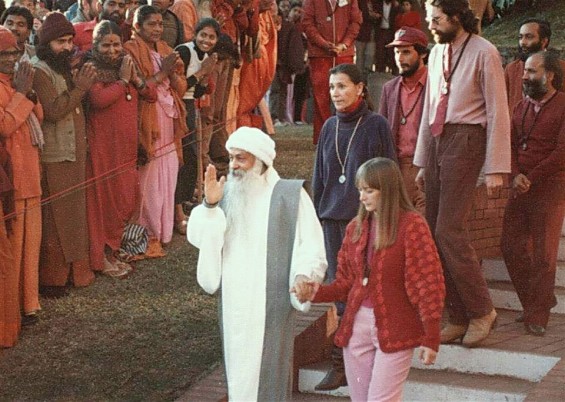 Ma Prem Hasya had a dramatic start to her life. Born into a Jewish European family, she was still a little girl when Hitler came to power. As the Nazis began the Holocaust, her mother hid her with a Christian family and told her, “Remember, you are not a Jew!” Then she disappeared to save herself.

When the war ended, her mother returned to claim her, but it wasn’t easy because little Hasya had been told to deny her own past! Her mother was instructed to stand in a line of other women – an identification parade – and then Hasya was told to go and find her mother.

Totally confused and upset, Hasya walked blindly towards the line, stood in front of her real mother and burst into tears. The reunion had happened.

Her mother took her to live in Israel. But when her teenage daughter was called for army service and returned from practice at the firing range with a target full of bullet holes, her mother exclaimed “I didn’t save you from the Germans to lose you to the Arabs!” She promptly took Hasya to live in Canada.

Growing into an attractive woman – “I was a late bloomer,” Hasya once commented modestly – she met her future American husband, who was well on his way to becoming a very wealthy man.

But it wasn’t money, or even love, that persuaded Hasya to marry him. “Being with him, it was the first time in my life I felt safe,” she recalled.

Hasya had two children, a boy and a girl, and became accustomed to a life of wealth and political influence, but eventually tired of the superficiality of her social role. She convinced her husband to shift the family to Hollywood where she came in contact with the world of movies, showbiz and entertainment.

After divorcing her husband, she met a film producer and worked with him to create the legendary epic “The Godfather” and other movies. She became personal friends with Marlon Brando, Robert Redford and many other well-known actors and actresses.

It was in Hollywood that she met Osho sannyasins for the first time and travelled to India in ‘Poona One’ to meet the mystic personally. She became close friends with what became known as the “Hollywood crowd” – among them, Kaveesha, Dhyan John and David.

Together, they moved from Southern California to live on the Oregon Ranch. Other sannyasins soon noticed a dramatic improvement in the style and quality of Osho’s robes and hats, as Hasya and her friends showered his wardrobe designers with the most glamorous fabrics Hollywood could supply.

After Sheela left, Osho put Hasya in charge of the community. The mystic often introduced her to visiting reporters, telling them “Now you are in Hollywood!”

When Osho was arrested and jailed in October 1985, Hasya figured prominently in press interviews, expressing her deep concern for the 54 year-old mystic’s health. After his deportation, she helped to organize Osho’s world tour, staying with him in Nepal, Crete, Uruguay and Portugal.

At the beginning of Pune Two, Osho appointed Hasya as his International Secretary, which included running the busy Press Office, dealing with many visiting journalists.

Later, Osho spoke in discourse about the need for women to free themselves from their conditioning and gave Hasya the workshop ‘Women’s Liberation’, which continued at the Osho Academy in Sedona under “Women’s Liberation, Part 2″.

After Osho left his body, Hasya returned to her home in Los Angeles, where each Wednesday she opened her house for an Osho video discourse and meditations. During this time, she was also involved in the Sedona Mystery School with her dear fellow traveller, Kaveesha.

Several years ago, Hasya was diagnosed with Parkinson’s Disease and since then has been in ill health until her death a few days ago.

I was very blessed to be with Hasya a few hours before she died. She was radiant and peaceful. Such grace, courage, beauty, wisdom, presence, awareness, compassion, kindness, generosity, humor, love. To me, Ma Prem Hasya embodied Osho’s vision of the New Man and the New Woman…Zorba the Buddha. A great Light, a great Presence. I was honoured to know her .
Mystica

All my love to you, Hasya. Such a beautiful and awe inspiring woman, always in my heart. Such a very very special being who journeyed so much in this life, who once floated into my hospital room to give me a crystal egg – what a vision.
Nishta

Beloved Hasya, I kiss your feet. Thank you for all your love and caring and wisdom and guidance… and for being the beautiful hollow bamboo that you are. You are forever in my heart and cherished. Love you!
Ayama

Farewell Hasya and fly high. Thank you for the beautiful, inspiring and intense time we could spend together. Hasya was a strong, sagacious, courageous and single pointed woman yet full of love, care and compassion.
Shanta

Beautiful Hasya, graceful, gentle, intelligent and utterly devoted… farewell! She scoured the earth during Osho’s world tour to find a new home for him and his people, and shared much of her personal wealth on that fitful voyage to make sure that he lived in the manner to which he was accustomed. I am so happy you left in peace and consciousness!
Savita

Beloved Hasya, the time came for you to fly free. Thank you for your grace, love, lovingness, beauty, and everything you shared. I remember long chats over the phone, your loving compassion, your beautiful, soothing voice, your exquisite grace in everything… in my heart, forever.
Premo

Beloved Hasya, you are finally free of your body. Congratulations! I witnessed you in Sedona coining the phrase: “I have the right to remain undisturbed.” May you be undisturbed as you travel through the Bardos. I love you, as so many of your fellow travelers do. May our love carry you to the further shore. Svaha!
Abhiyana

The Women Liberation Group led by Hasya, opened so many understandings and doors within me. I was able in a loving way to embrace my womanhood. Your kindness, love, and Osho transmission was such a support to me. I still feel your welcoming for evening meditation in your home in Beverly Hills. Please dust me with your grace. Much love.
Rakasa

Beloved, beautiful, regal Hasya, you where one of my unforgettable teachers in Sedona. Love you and thank you for visiting.. Namaste from Germany,
Pratibha

Thank you Hasya, for all the good times, the hard times and the hat. ’til we meet again…
Hasibo

Beloved one, so many deep moments we shared, including standing at Lao Tzu Gate together when Osho left His body.
You are so deep in my heart. Fly high, my friend. I love you.
Prabha

Such a lovely, gracious woman whose presence was a pleasure to share ~ may freedom from form take her on a new journey with love surrounding.
Arupo

To Hasya, the beloved:
May gratitude and fountains of joy and triumph give you back what you shared on mother Gaia!

I saw you from a distance in Pune in 1989 and our eyes met. Women travellers facing a new dawning for mankind and this time Women first! So grateful I have seen you: Fantastic woman!
Sukhita

I still can see and it will always be with me, the wording, with love and His Blessings and Hasya’s name on the letter when I so excitedly opened it on May 18th 1986 to find my new sannyas name, Abheeru, and I was so full of gratitude and felt so accepted, fly high beloved one,
Abheeru

On the evening day of Rosh Hashanah Celebration, the Jewish New Year, today: September 20, 2017, I found out that you are already 3 years dead, and I didn’t know. Mama Hasya, I tried to visit you just about that time. I took walks each Shabbos towards the Doheny Mansion, from the residence where temporarily I took shelter in Beverly Hills. I was transitioning with life once again, and I needed to be close to you to regain strength, as always I did when I was under your energy field and received your loving kindness. I called Erika asking for a date to visit you. All she said, was that the family didn’t welcome visits at that point due to your health conditions, so I looked at the house gate each time I walked by, and you must have caught my energy surrounding you and sent back sparkles of goodness, as I received help almost immediately after your departure, and a huge life shift occurred benefiting my situation generously. I learn now, reading the post I found on the internet, that the dates coincide. I am pasting it here as part of this article tribute to you.

Sorry I couldn’t be close to you during the last couple of years of your Parkinson’s. I became sick with depression last season I took care of you. It was so difficult to absorb that such an intelligent amazing woman’s brain was gone with the Alzheimer’s stage of the disease. I became a Docent at the Museum of Tolerance to walk visitors through the dignity of the Holocaust’s survivor’s lives instead of continuing seeing you. I couldn’t, it was painful. My personal life went down the hill speedily then, parallel to your life’s health decay.

I am posting the following article in memoir to the most wonderful individual that was part of this earth and Universe, leaving meaningful traces of brilliant diamonds to all those that got the privilege to know her. Hasya was the most compassionate woman, friend and “mother” (she didn’t like it when I called her Mother), a New Wisdom supporter of a relevant real meaning of family and relationships, a ‘Woman’s Liberation’ leader, role model, my teacher.

I always loved Hasya, I don’t know why, just like this, but from the moment Osho did choose Hasya as his secretary, I felt again in touch, again in love with Osho, I felt relaxed and also joyful. Lot of love still in me for Hasya and all that she did for Osho.

How the Universe Was Created…