The well that made everyone go mad

“Each individual is so unique, so incomparably unique, that there is no way to judge who is normal and who is abnormal,” says Osho. From our series 1001 Tales, compiled by Shanti.

There is a Kahlil Gibran story.

A magician came to town and threw some medicine into the town well.

He said that whosoever would drink from this well would go mad.

By the evening the whole town had gone mad. They had to drink from the well, even though they knew they would go mad, because it was the only well available to them. And it was a summer day, hot, and they tried not to drink, but how long can you try?

By and by they yielded. By the evening the whole town had gone mad.

The king was very happy. Standing on his palace terrace he looked around and he said to his prime minister, ’We are grateful to God that we have a separate well, otherwise we would also have gone mad. The whole town has become mad.’

People were dancing, singing, jumping, screaming, howling. The whole town was simply unbelievable. What has happened? It was a nightmare. People were doing sorts of things they had never done before.

But within hours the happiness of the king disappeared, because the people came to the palace and they started shouting that the king had gone mad. The king’s army was also in the town and they went mad, and his bodyguard and his cook and his servants. Only the king and the queen and the prime minister, three persons, were left.

Now what can you do against the whole town when it is mad? The king became very afraid and said. What to do now?’

The prime minister said, ’There is only one thing to be done. I will try and prevent them for a few minutes. You run and drink from that well. There is no other way. You go fast.’

The king went, drank from the well, and when he came back he was dancing. The crowd shouted in joy and they said, ’Thanks be to God. We are grateful to God. Our king’s mind has come back!’

How do you decide who is normal?

Lao Tzu wants to destroy the criterion. He wants to tell you that there is no criterion to judge. Each individual is unique – that is the Tao vision.

Each individual is so unique, so incomparably unique, that there is no way to judge who is normal and who is abnormal. Look at the freedom Tao gives – you can only say that people are different: nobody is normal, nobody is abnormal. People are simply different.

Nothing is wrong – that is the Taoist vision. Everything is good as it is.

Comparison comes from the human mind. The birds are birds; they are not worried about why they are not animals. The rose is a rose; the rose is not worried about why it is not the lotus. Hence they are not neurotic. Otherwise the rose will become neurotic because he is not a lotus, and the lotus will become neurotic because he is not the rose. And the small bush will lie down somewhere on some psychiatrist’s couch because he is not the Cedar of Lebanon. ‘Why? Why am I not the Cedar of Lebanon? Why has God made me so small – just a bush? For what karmas am I suffering?’ She will make some philosophy to console herself, ‘I have done bad karmas in my past life, that’s why.’

All rubbish! All theories are rubbish! They are needed because you ask rubbish questions. And then somebody has to supply rubbish answers. There is a law in economics: whenever there is a demand, there is a supply. If you ask a foolish question, some wise guy is going to give you a foolish answer.

It is very simple. Things are as they are. Things are different, certainly, but they are not unequal. Let me repeat it: things are different, but they are not unequal. Everything is unique. You cannot find a single leaf in the whole world which is like another leaf. You cannot find a single pebble on the whole earth which is like another pebble. No, nothing is similar, but nothing is unequal. Each thing exists in its own way.

Quote by Osho from Tao: The Pathless Path – Talks on extracts from ‘The Book of Lieh Tzu’, Vol 2, Ch 5 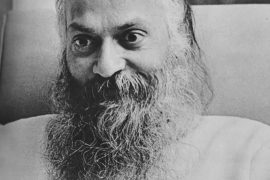 The mind is very old

Alexander’s last words: “All is vanity.”

Mind is the only barrier to silence